NORMAN GILLER pays tribute to the team at The People who got the Roy Hodgson scoop and pronounces on how enmities at West Ham nearly 50 years ago may have helped select the new England manager. Plus a less-than-fond farewell to Sly Bailey

The usually balanced Newsnight on BBC2 took a sarcastic swipe at Fleet Street’s football writers for being caught cold by Roy Hodgson’s appointment as England manager. They introduced Jeremy Paxman’s uneasy interview with mouth-and-trousers Joey Barton on Tuesday night by pointing out that not a single paper got a sniff of the story. 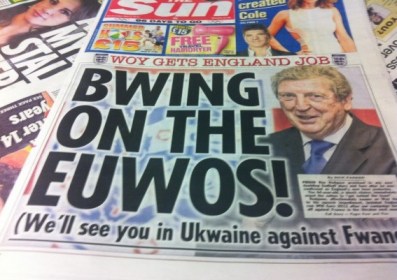 I hope they do their homework better when on their usual political beat.

If their trawl through the papers had taken in The People on Sunday they would have found it written clear and large that Hodgson had taken over from Harry Redknapp as the preferred choice of the Football Association.

And this on the very morning that the story broke.

Take a bow Dave Kidd and – online – Steve Bates for one of the scoops of the year. While all eyes were on ‘Arry boy, they made it clear it was Hodgson who was going to get the nod and the job.

In fact chief football writer Kidd had been pointing that way all year, even when every other paper was saying it was just a matter of time before the Redknapp coronation.

It took barely a day for Fleet Street to get the knives out for Hodgson, a brilliant tactician and thorough gentleman, to be taunted because he cannot pronounce his Rs.

I wonder how many of the mocking headline writers realise that “Woy” could take the pee out of them in five languages?

How ironic that they ridicule Hodgson for the way he speaks his perfectly understandable native language after four years of all of us struggling to make head or tail of what Fabio Capello was talking about.

The Sun subs will be salivating thinking up more below-the-belt descriptions for Hodgson, to match Plonker Robson and Turnip Taylor.

Come on Fleet Street. In this era of the Leveson inquiry, isn’t it time to grow up?

My regular reader will know that I have quoted Harry Redknapp here in my SJA home as not having been approached by the FA for the job. I repeated it on Facebook and Twitter, but still many Tottenham fans were accusing him of negotiating behind the club’s back. The Mirror even went to the lengths of publishing the exact details of the contract he was (not) being offered!

Spurs boss Redknapp was gracious in the way he accepted that Hodgson had got what he once described as his dream job, but deep down he must have wondered what part his former West Ham team mate Sir Trevor Brooking played in the appointment. 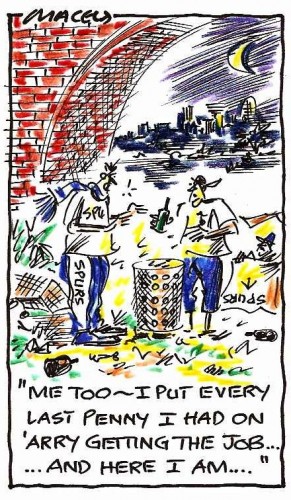 Back in the late sixties Harry (along with this correspondent) was a member of the Bobby Moore drinking school. Mooro and Trevor never got on. The son of a local police inspector, Trevor was a walking brainbox with more than a dozen school certificates (the GCSEs of the time), and Mooro – with heavy sarcasm – used to call him “Professor”.

Bobby Moore made no secret of the fact he did not rate Trevor as a player. During Trevor’s three wilderness years on the West Ham transfer list, there was little indication that he would blossom into a key player for England, coming out of his shell once Moore had moved on to Fulham.

Years later, Redknapp and Brooking had a huge fall out when Harry became West Ham manager, while Trevor’s pal Billy Bonds found himself sidelined by what was seen by some as stab-in-the-back politicking.

In view of their history, it would have been sensible and fair for the FA to ask Trevor to step down from the committee selecting the successor to Fabio Capello.

They will claim that Harry was not even discussed, as they have repeatedly said that Hodgson was the only candidate.

If you believe that, then I have a bridge over the River Thames that I would like to sell you.

Good luck to Hodgson in his challenging role, but he might soon be wishing the poisoned chalice had been handed to ‘Arry boy.

Fleet Street will not even allow him the luxury of a honeymoon. They will be out to get back at the FA for misleading them into thinking Redknapp was their man.

Instead, it turned out to be the Man of the People.

SO GOOD RIDDANCE Sly Bailey, the Trinity Mirror boss who has announced her decision to stand down after 10 years of Titanic achievements. I wonder how many celebration parties her departure has triggered among what’s left of the staffs at their titles?

I am all for women smashing the glass ceiling and leading from the front, but perfectly named Sly has put their cause back with her appalling leadership. More like bleedership.

Her rabid cost-cutting might have been just about acceptable if she had not shown mind-numbing hypocrisy by helping herself to huge bonuses while kicking scores of exceptional journalists out on to the street.

Those of us who were around in the golden days of Cecil King and Hugh Cudlipp have looked on at what has become the Mirror train wreck with a mixture of despair and disbelief.

We need the old Mirror to bounce back. It will be good for the entire industry.

Perhaps they need a multi-lingual Roy Hodgson-type at the helm. Sly seemed to speak only with a forked tongue.