This blog is coming to you via the free wi-fi service at St Pancras Station as I wait for the Eurostar train to Brussels, from where I will go on to Ypres to pay respects to the Fallen of the First World War. 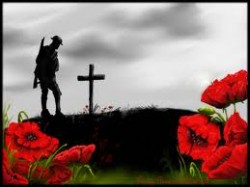 How to find a sports theme from this most obscene of obscene wars? Well, it gives me the opportunity to talk about two real football heroes in an era when the word “hero” is tossed about to the point of total devaluation.

The story of the first professional footballer to sign up for action at the front is well worth recording here as a mark of respect to the hundreds of players who gave their lives during the senseless four-year conflict.

His name was Donald (Donny) Simpson Bell, a Yorkshireman born in Harrogate on December 3, 1890. Educated at St Peter’s School, Harrogate, Knaresborough Grammar School and Westminster College, he was a superb all-round sportsman who was outstanding at rugby, cricket and football.

While teaching as an assistant master at Starbeck School near Harrogate, he decided he needed to supplement his meagre income and signed as a professional footballer with Bradford Park Avenue after amateur experience with Crystal Palace, Bishop Auckland and Newcastle United.

He made his League debut against Wolves at Molineux in 1913, and by the time war broke out in August 1914, he had established himself as a resolute full-back.  Bell signed up as a volunteer with the West Yorkshire Regiment, the first professional footballer to enlist, just weeks after war was declared.

Bell moved through the ranks quickly, and within seven months had been promoted to 2nd Lieutenant in the 9th battalion of the Yorkshire Regiment.

Five weeks after marrying his sweetheart, Rhoda Bonson, in a hurriedly arranged ceremony at Kirkby Stephen in the Lake District, Bell joined his battalion on their journey to the Western Front, just in time for the Battle of the Somme.

This is how it is reported in the official Yorkshire Regiment records:

Nine battalions of the Yorkshire Regiment – each of approximately 1,000 men – fought on the Somme. There were 3,500 casualties by the time it ended on 18 November 1916.  Four Victoria Crosses were awarded, one of which was to 2nd Lieutenant Donald Bell for a supreme act of gallantry on 5 July 1916.

To the south east of La Boiselle, the objective given to 69 Brigade was to capture a position known as Horse Shoe Trench. It was about 1,500 metres long and stood on high ground in a slight curve between La Boiselle and Mametz Wood.

A German machine gun began to enfilade the 9th Battalion of The Yorkshire Regiment. On his own initiative, 2nd Lieutenant Donald Bell, supported by Corporal Colwill and Private Batey, tried to destroy the gun position. They crept towards it along a communication trench and then suddenly made a dash towards it across open ground.

Bell, who was a superb athlete, moved with incredible speed and surprised the occupants of the machine gun position, shot the gunner with his revolver and blew up the remainder with Mills bombs. He then threw bombs into the nearby trench, killing over 50 of the enemy.

This very brave act saved many lives and ensured the success of the attack. The citation for Bell’s Victoria Cross recorded that it was for most conspicuous bravery.

Just five days later, the incredibly heroic Bell made a similar attack on another German machine-gun post and was killed. The place where he fell was named Bell’s Redoubt in his honour.

A five-foot high Yorkstone monument – jointly financed by the Green Howards, the Yorkshire Regiment’s modern equivalent, and the Professional Footballers’ Association – was erected close to the French village of Contalmaison in 2000 in memory of Lieutenant Bell, VC, and his Yorkshire Regiment colleagues who lost their lives on the Somme. It is a corner of a foreign field that will be forever England.

ANOTHER FOOTBALLING LIEUTENANT who died on the battlefields of France was Walter Tull, the grandson of a slave who had the distinction of being the first black officer in the British Army.

Born in Folkestone in 1888, he was the son of a Barbadian who had arrived in Britain in 1876 who then married a Kent girl.

Walter’s mother and father had both died soon after the boy’s seventh birthday, and Tull was brought up along with his brother in a Methodist-run orphanage in Bethnal Green. He was spotted by a Tottenham scout playing amateur football for Clapton (not to be confused with the professional club Clapton Orient), and in 1908 he signed for Spurs.

A quick and powerful inside-forward or wing-half, Tull spent two seasons with Tottenham during which he was involved in an unpleasant and unsettling racial incident while playing at Bristol City when he was abused by City fans, who according to one report used “language lower than Billingsgate”.

It led to a loss of confidence, and in 1910 Tull was sold to Northampton, where he played 110 games. He was good enough to attract the interest of Rangers, a move that appealed to him because his brother, Edward, was working in Glasgow as a qualified dentist. Just as a deal was being discussed, war was declared.

Tull enlisted with the 1st Football Battalion of the Middlesex Regiment, and was quickly promoted to sergeant.

Tull served on the Somme until being invalided back to England in December 1916 suffering from trench fever. On his recovery, he was sent to officer’s training school at Gailes in Scotland and received his commission in May 1917.

This was an astonishing achievement at a time when the British Manual of Military Law specifically excluded “Negroes from exercising actual command” as officers. It was Tull’s superiors who recommended him for officer training, a remarkable testimony to his charisma and leadership qualities.

Lieutenant Tull was sent to the Italian front, and was mentioned in dispatches for his “gallantry and coolness” following the Battle of Piave. The war was into its last months when he was transferred to France, where a push was on to break through the German Western Front defence.

On March 25, 1918, Tull was ordered to make an attack on a heavily fortified German trench at Favreuil. Soon after entering No Man’s Land, leading from the front, Tull was hit by a German bullet and fell mortally wounded. His men risked their own lives against heavy machine gun fire in a bid to retrieve his body. It was an indication of how highly he was thought of by those to whom he had to give orders. Tull was 29.

“He was so brave and conscientious and popular throughout the battalion,” he told him in extraordinarily emotional terms. “The battalion and company have lost a faithful officer, and personally I have lost a good friend.”

It was 1999 before Tull, a hero on the pitch and in the trenches, got long overdue recognition with the opening of a Walter Tull Memorial Garden next to Northampton Town’s Sixfields Community Stadium.

Donald Bell and Walter Tull, two real heroes, who will be on my mind as I take the Eurostar to Belgium. I will be coming back.

At the going down of the sun and in the morning, we shall remember them.