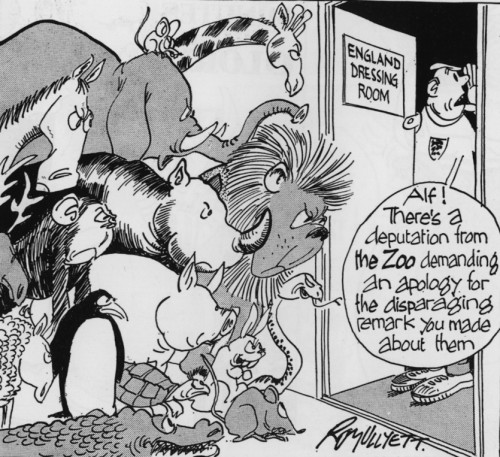 In the week after the terrible killings in Paris, NORMAN GILLER remembers an old Fleet Street colleague, cartoonist Roy Ullyett

Where do we draw the line?

That’s the question all we journalists and cartoonists across the board will be asking ourselves following the horrific events in Paris last week.

I stand four-square behind the Charlie Hebdo surivivors, who have published a cartoon of the Prophet Mohammed on today’s cover of a special commemorative issue, their first publication since extremists killed 12 people, many of them gathered for an editorial meeting at their office.

The trend-setting French newspaper Liberation gave office space and facilities to the Charlie Hebdo staff as they prepared their satirical magazine for a print reach of 3 million, compared with their normal run of 60,000.

They are determined to show that the pencil as well as the pen is mightier than the sword.

The magazine has been published in 16 languages and in 25 countries, and I hope you join me in donating to the fund to help pay the overheads. Thanks to Dominic Ponsford’s always-informative Press Gazette, I discovered the paying-in details, which can be found here.

It tested my fourth-form French, but I managed to transfer money as I added my tiny voice to what I see as a demonstration of support for all-important freedom of expression. Without it, democracy dies. Last week the cartoonists, this week the columnists? Next week, the bloggers?

As Confucius might have said: “Many tiny voices make a loud statement.”

The great cartoonists can always produce art that speaks thousands of words.

I was lucky to work with the king of sports cartoonists, Roy Ullyett, who for more than 30 years lit up the Daily Express, in the days when it was a proper newspaper. I considered it a monstrous insult to journalists and journalism that on the key day after the shooting, the Express went with a front page that did not mention one of the major stories of the last 30 years.

Roy Ullyett would not have believed it. He had a pencil that could prick pomposity, put meaning into the most mundane moments and bring smiles to the saddest faces.

We were close friends for decades, and I was privileged to be trusted with getting his thoughts and memories down on paper for his stunningly illustrated autobiography, While There’s Still Lead In My Pencil. I had first suggested it to him in 1966, and he was so taken by the idea that we sprinted into print 30 years later when Roy was 84.

Roy was poached from the London Evening Star in 1953 for a then astronomical £100 a week. Then, he was told by Express proprietor Lord Beaverbrook: “You will not become a millionaire working for me – but you will live like one!”

During the 1966 World Cup, there was huge controversy when Alf Ramsey referred to Argentina’s players as “animals”. This followed England’s quarter-final victory over them in an explosive match that had as its volcanic moment Argentina captain Antonio Rattin getting his marching orders.

Alf was suddenly enemy No 1 in Latin America. The British embassy in Buenos Aries was attacked, and Roy rubbed it in with the cartoon reproduced above, in which he had the animals protesting that Alf had insulted them.

It was a magical and meaningful cartoon that showed the pun was mightier than the sword.

Roy would have wept buckets over the outrage in Paris.

No question, he’d have known where to stick his pencil. #JeSuisCharlie