Curlers in and headscarf on, NORMAN GILLER thought his eyesight was playing tricks on him when he started reading his Sunday sports pages

Let’s play an old-style newspaper and magazine game of “Spot the Difference”. 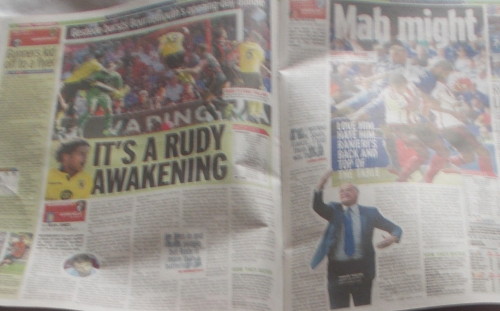 And then there’s this…

Can you spot the difference?

No, you’re right. There isn’t any.

I know my old minces are going fast, but I thought I was seeing double this week when I clapped eyes on the football supplements published by the Sunday Mirror and Sunday People.

They are identical. As one former colleague told me, “Same everything. Even the news stories are the same. So Alan Wilson has an ‘exclusive’ in both papers.”

What my talented old colleagues such as Ken Jones and Ken Montgomery (Sunday Mirror) and Mike Langley and Brian Madley (Sunday People) would have made of it all I think might have had to be printed on asbestos.

It is a sad sign of the times that we have come down to the farce of two once great newspapers using the one staff and the same subs and layout artists to satisfy two sets of readers.

Welcome to the land of Alice in Wonderland.

“I have never, ever known anything like this,” said one old mate from the press boxes of football grounds around the country who is still trying to ply his trade. “I know we have seven-day operations now, but that means the same reporter writing the report for the Sunday and Monday paper. That’s not ideal, but this latest development is something else.

“For two rival papers to have the same football coverage … they are in effect selling the same thing twice. And no, freelances do not get paid any extra for their work being published twice.

“With the exception of Manchester United and Chelsea, every football writer’s match report was in both papers, word for word, headline for headline. Premier League and Football League. The results pages with tables etc are identical.

“The two papers are doubling up on virtually every game, which means the sports desks’ need for football reporters has almost been halved at a stroke. If anyone buys the two papers they would feel rather short-changed. Latest score: Bean counters 1, Freelances 0.”

I fear it will get worse. I have said many times that I am convinced my youngest grandson (Daniel, aged 8) will never buy a printed newspaper.

We did approach the publishers, Trinity Mirror, but they declined to comment.

The demise of printed newspapers comes ever closer with this cloning operation that is cheating journalists out of a living and readers out of originality.

IT’S NOT JUST newspapers that I am struggling to understand as we enter the new football season. I have been watching the game for close to 70 years, but seeing Monday’s Premier League match at Anfield makes me think I no longer understand the game.

As the Liverpool debut goal by Christian Benteke went into the Bournemouth net I tweeted: “If that goal is not offside then I am Hilda Ogden.”

Well, Chuck, according to the referee and his assistant, I should get my hair in curlers, put on my headscarf and polish the ducks on me wall.

It screamed out to me, and millions of others watching on TV no doubt, that Coutinho was not only in an offside position but he was interfering with play to the extent that Bournemouth goalkeeper Artur Boruc shaped to save a shot that was not made.

As dear old Bill Shankly used to say: “If he’s not trying to interfere with the play, what’s he doing on the pitch?”

Surely this sort of refereeing howler demands the introduction of instant video replay decisions, as we have had for years in cricket, rugby and tennis?

It would have taken 20 seconds for a video ref (like a third umpire) saying through the referee’s earpierce: “Got that wrong. Call it offside.”

Football must adopt modern technology to make sure every decision is correct.

I have seen many great Liverpool teams in my time, but this is not one of them. They now have the confidence booster of two wins to kick off the season, but it is a false foundation. Bournemouth should have come away from Anfield with at least a draw.

I wonder how the Sunday Mirror and Sunday People would have reported it? I think they would have given an identical thumbs down to the goal.