PETER WILSON expresses a county follower’s angst over the latest rumours about format changes, but finds a new history of the County Championship a perfect refuge

Cricket’s County Championship is readying itself for another kicking over the winter months, the time of year when those in authority know they can get away with putting the boot in without any organised opposition from county club members.

If reports are to be believed, the competition, which has been the heart and soul of the game in England and, more recently, Wales for 125 years will be restructured yet again, although this time it will be far more negative than the ground-breaking move of 15 years ago, when two divisions were introduced.

With a franchised Twenty20 competition high on the agenda in some misguided belief that it would put that form of the game in this country on a par with the IPL or the Big Bash (which is a bit like saying that if India and Australia restructure their football, they will be able to compete with the Premier League), the County Championship fixtures are set to be reduced from 16 games for each side to either 12 or, I shiver at the thought, 10.

It could even be that the two-division system ends, with a one-division Championship returning or, with a bit of creative accounting that could include Scotland, Ireland or the minor counties, a three-division format is introduced, which will pretty much make what is supposed to be the game’s blue riband competition look something like the lower divisions of the Scottish football league.

There has been some hope recently that these proposals will be shelved because of the upturn in attendances at Twenty20 matches this season. That, though, would be only a temporary move. Money is the name of the game.

Should followers of county cricket be surprised? Of course not. Despite their subscriptions being a valuable source of cash flow during the winter months, members are not high on the list of people considered when fundamental changes are proposed.

Yet the County Championship remains the heartbeat of the game. Since the two-division format was introduced, England have won the Ashes five times, which could not have been achieved without the opportunities and coaching provided at county level, although listening to some in the game, you would think county cricket has been a hindrance to the national side.

For people like myself – by the end of this season I would have attended every one of Surrey’s County Championship matches – Chalke’s book is a delight. It covers every decade of the competition from the morning the Grace brothers walked out to bat against Yorkshire in what would later be recorded as the first game of the championship to Yorkshire’s triumph last year. 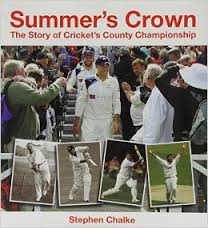 Chalke looks at the teams who dominated each decade, the players, how the championship has evolved through the points system and number of games played (32 matches a season anyone?) and the context of the times in which the games were played.

He has painstakingly researched all the grounds that have hosted championship matches, including the 14 on which a match had been played on only one occasion. Of course there are statistics, but they are not just the run-of-the-mill batting and bowling averages. I enjoyed the analysis showing the sides who won the title despite their bowling performances being considerably inferior to their batting, although it comes as no surprise that more than half the championships have been won by the side with the best combined bowling figures.

There is, of course, a list of all the county champions and their captains, and Chalke attempts to discover who are the competition’s greatest sides: Surrey edge the best team from any era with their dominance in the 1950s, but Yorkshire are the most successful county over the 125 years, with their soon-to-be 33 titles and a win percentage of 42.9 (a figure that should be improved when they win this season’s title).

Chalke does not ignore the limited-over formats, but they are no more than part of the appendix, as they should be. This is about a competition that has seen myself and other Surrey supporters start the season with four days in Cardiff before moving on to Northampton, Leicester, Derby, Beckenham, Guildford, Colchester, Bristol and Manchester, all of course via The Oval. Thousands of fans from other counties have also filled their petrol tanks or paid high rail fares, hotel bills and entrance money (although Alec Stewart and the Surrey boys have been very generous with their guest tickets) to watch a competition that will, inevitably, be messed about with yet again.

Chalke has previously won awards for his cricket books and he should do so again with this one. Its design team should also lift their bats in celebration for producing a book that just encourages you to turn the pages. I would say this is the perfect book to pick up for a quick delve, but when I did that when it first arrived I was still “delving” some two hours later.

Summer’s Crown should be a fixture in every county’s club shop, and on every championship lover’s bookshelf. Talking of fixtures, when do they come out for next season?