NORMAN GILLER’s just finished the 98th book of his career. Is there a risk it could be redacted?

Worried old hack alert! Journalists everywhere – across the board and in every department – should in my opinion be voicing their concern over Europe’s “right to be forgotten” ruling.

Just in case you’ve not been paying attention, the European Union’s contentious decision gives people the right to request that articles they see as irrelevant or out of date are removed from search engine results. 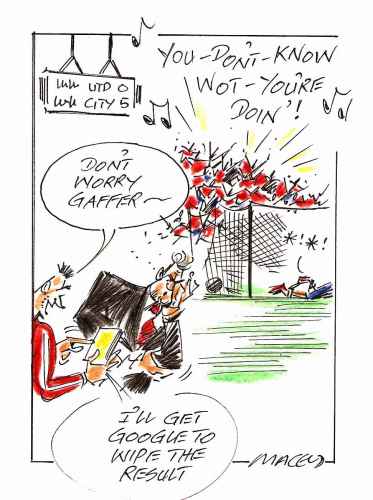 Google has caved in and is wiping thousands of revealing stories from its search listings. I consider that, in many cases, this is protecting the guilty, allowing them to push their skeletons back into the cupboard.

My major worry is just how long will it be before the focus is switched to the vast British newspaper archive?

Will a further clampdown on freedom of speech spread like a virus to the bound volumes of archived newspapers and the growing collections of microfiches held in newspaper offices and public libraries?

At the moment the files can be accessed by members of the public, but how long before Big Brother decides that people with dark events in their history can have the newspaper reports blanked out?

How does the controversial EU ruling affect sports journalists? I can think of scores of sporting scandals that certain people would prefer to be forgotten, never again mentioned, wiped from the public domain as if they had never happened. Just imagine, for example, if athletes could have drug offences hidden, or footballers their off-the-field indiscretions redacted.

It was not that long ago that several footballers were suppressing newspaper reports with expensively arranged High Court super injunctions. They no longer bother to shoot the messenger. They gag him.

The freedom of the press is, in my opinion, one of the most precious things we have in a world quickly becoming too much like George Orwell imagined it in 1984.

Colleagues, please guard that hard-earned freedom with the determination and vigilance it deserves.

WITH MY Tottenham Hotspur leanings, I was amused and also bemused to hear the usually sensible Manchester City manager Manuel Pellegrini sneering about Chelsea’s park-the-bus defensive tactics that earned the Blues a draw at the Etihad on Sunday.

If I thought Spurs could stifle Arsenal in the same way, I would volunteer to drive the Tottenham bus on to the pitch for Saturday’ s north London derby at the Emirates.

Pellegrini accused Mourinho of sending his side out to play “like a small team”. It was a pithy comment beneath the Chilean, who should have chilled out and been big enough to acknowledge that Chelsea have made a tremendous start to the season.

Manuel should leave the arrogance to Mourinho and Louis van Gaal. It’s difficult to choose between them as to who is top of the conceit chart. The ego has landed for both of them.

I am watching with close interest from the sidelines to see how long the Press pack will put up with the superciliousness of van Gaal before they start taking pot shots at him.

I interviewed him in Amsterdam back in the early 1990s when he was manager of Ajax. I asked an innocuous question about how his Ajax compared with the great team of Cruyff and Neeskens of the 1970s (which, as a player, van Gaal could not break into). He gave me his famous baleful stare and said: “How do you compare as a writer with William Shakespeare? You just cannot make comparisons with then and now in any field.” He is the master of the put-down.

Louis is the friendliest manager you will meet as long as you write what he wants to read. He pretends he has no knowledge of what you are writing about him, but secretly hoovers it all up and waits for his moment for revenge against any journalist who crosses him.

He is out of the Fergie school, not suffering fools and quick to jump on any writer he considers attracted to fiction rather than fact. And this man can really jump. He was one of Holland’s top gymnasts before deciding to concentrate on professional football.

Those journalists allowed close to him will be rewarded with enjoying the incredible knowledge of a manager who continued the Dutch tradition of Total Football. At Old Trafford so far, it’s been more like total chaos.

A man of many moods and many tongues, he is remembered in Spain for his parting shot to the press when forced out at Barcelona in 2000: “Amigos de la prensa, yo me voy. Felicidades.” This translates as, “Friends of the press, I am leaving. Congratulations.” They had got their man after months of assassination attempts wrapped in words and hurtful headlines.

How long before the British press turn their guns on him?

And will you be able to read about it in future on Google?

Wed May 13: SJA York Races Day, sponsored by Ladbrokes, at the Dante Festival