Nagging toothache? NORMAN GILLER learned from golf’s first superstar that success from tee to green is all about belief. And he pays tribute to the milestone programme reached by A Question of Sport

Few among us can begin to imagine the pressure Rory McIlroy is under every time he swings his club in a major tournament. While he failed to show wisdom when quitting midstream in the Honda Classic, we should reach out with understanding and sympathy rather than metaphorically kick him in his already painful teeth. 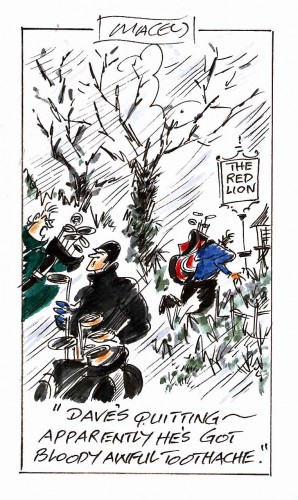 Back in my Express days I had the pleasure and privilege of having my desk alongside that of exceptional golf correspondent Ronald Heager, who was one of the best informed and authoritative of his generation of Fleet Street golf writers.

He was the main motivating force behind the Association of Golf Writers throughout the 1960s and 1970s, and through him I used to meet a steady stream of golfing greats seeking Ron’s advice and support, including luminaries like Tony Jacklin, Neil Coles and Dai Rees. Each of them would have empathised with McIlroy, but would have strongly counselled against walking out of a tournament regardless of the circumstances.

In the 1980s I was assigned as the This Is Your Life scriptwriter for the tribute to arguably the greatest British golfer of them all, Henry Cotton. He was a superstar before the word was invented, travelling to golf tournaments in a chauffer-driven Rolls, living in luxury in the suite of a five-star hotel with his own butler, enjoying champagne and caviar, and wearing only clothes hand-made in Savile Row.

It is often misreported that Cotton received a posthumous knighthood. He had accepted it before passing on in 1987, but did not live long enough for the ceremony.

I sat at his feet after his This Is Your Life show and (cliché alert) asked the secret of his success.

“Young man,” he said, “to win at golf you must dominate your nerves. If you think your nerves can get the better of you when facing a crucial putt then they will. Golf is not only about stroke play but about self confidence. I give you the three Bs – believe, believe, believe. Without that belief in yourself, you might as well stay in the clubhouse.”

That’s exactly the way Sir Henry spoke, just as if quoting from any of the 10 books he wrote about winning at golf. “I have employed ghostwriters,” he told me (as I angled for a book project), “but always finish doing the job myself. Writing is like playing golf. You need to be in charge of your thoughts. It is all about concentration and blocking out everything else.”

Wise words that Rory McIlroy will do well to dwell on as he battles demons that have sunk scores of golfers down the years.

IT IS ASTONISHING that A Question of Sport reached it’s thousandth show milestone. Wasn’t it just the day before yesterday that I travelled to Manchester with my old chum Henry Cooper for the early rehearsals of the first programme to be shown on national television?

Henry was the first team captain, pitched against rugby union genius Cliff Morgan, one of the most eloquent of all the sportsmen I have met. He and Henry were poles apart with their vocabulary, but the mixing of opposites worked to perfection.

BBC decided to commission the show in 1970 after it had run in the north-west region for two years under the chairmanship of Stuart Hall, a master broadcaster now making headlines for all the wrong reasons.

The team guests in that first programme were George Best, the lovely Lillian Board, England cricket captain Ray Illingworth and football master Tom Finney. Best and Finney on the same show, arguably the greatest British footballers.

It is chilling to think that Olympic 400 metres silver medallist Lillian had succumbed to cancer before the year was out.

What viewers didn’t know is that those early shows were filmed in an old Manchester church that had been converted into a studio, and they used to shoot the programmes on a Sunday in what used to be the nave.

Presenter David Vine would give a sham sermon to the audience just to get them warmed up: “Dearly beloved, we’re gathered here today …” and he’d add, “During our first hymn Cliff Morgan and Henry Cooper will pass among you with the collecting box, please give generously …”

Now, 43 years on and with Sue Barker in the presenter’s chair, it is shot in the high-tech studio in Media City, Salford, with computerised graphics and high-definition pictures that would have dazzled in the days of the chunky sweaters worn by the team players in the psychedelic 70s.

It comes on our screens like an old faithful friend, tired and dated looking when compared with the Sky’s brash rip-off, A League of their Own. But I, without question, prefer the original.

Make sure you don’t miss out on the gala celebration of the best of British sports journalism by booking your ticket – or even a table – for the SJA British Sports Journalism Awards on Monday March 25 at the Grand Connaught Rooms in London’s Covent Garden.

The event begins at 6pm, with a champagne reception and opportunity to view an exhibition of many of the leading entries in the photography categories, prior to a three-course dinner followed by the presentation of the awards.

Click here for a booking form, or contact our event organisers, Start2Finish, on 020 8916 2492 or by email to martin@s2fevents.co.uk for more details.