NORMAN GILLER’s not been to see the film Damned United. Here, he explains why he won’t be going

I knew the real Cloughie well. He was so much larger than life that there is no way he can be properly captured, even on the big screen. So, out of respect for the memory of Brian Clough and the feelings of his widow, Barbara, I won’t be going to watch celebrity impersonator Michael Sheen in Damned United.

During his brief spell at Leeds, I was close enough to Clough to swear that, (1) he was not hitting the bottle, as is apparently suggested in the Damned United novel and film; (2) he had conquered the weed and was not smoking (Damned United has him chain smoking); and (3) he had a Thesaurus of a vocabulary and did not need to swear in every other sentence, a foul-mouthed image from the movie that his family object to most strongly.

The fact is that Clough was doomed to lose to player power before he even walked through the doors of Elland Road with a swagger that sickened the United footballers who, almost to a man, hated him on sight. He had been pillorying them for years with a tongue as cutting as a tackle by Norman “Bites Yer Legs” Hunter.

Putting Clough in charge at Leeds was like sending the Chief Rabbi into Palestine as peacemaker. Billy Bremner and Co wanted no part of a manager who had been their constant critic throughout the silverware-winning years under Don Revie, an equally stubborn Yorkshireman.

Clough was right. Leeds did do a lot of cheating,crafty off-the-ball kicking and diving to win their trophies. But they also played football with enormous style and guile, something that Clough was not prepared to acknowledge.

Revie once had me pinned against a wall and was threatening Leeds-style violence after I had gone into print saying his team took no prisoners. He was later big enough to write me a letter of apology for his over-the-top reaction (only football reporters will cotton on to the sarcasm couched in “over the top”).

Jose Mourinho is the closest thing I have seen in the modern game to Clough â€“ arrogant, charismatic, opinionated, controversial, successful. But Jose has yet to get near to back-to-back European Cups. Cloughie was the original Special One.

Clough was Godâ€™s gift to journalists, and nobody knew how to play the power of the press better than he. Cloughie was not so much a spin doctor as a spin surgeon.

I remember noting just how aware he was of the importance of publicity the first time I interviewed him for the Daily Express, weeks after he had taken over at Derby in 1967. As we stood chatting, full-back Ron Webster knocked on his office door.

He indicated me: â€œThis Young Man can call me Brian â€™cos heâ€™s a member of the Fourth Estate, which can do me and this club the power of good. But to you, Iâ€™m either Mr Clough or Boss.â€

Brian allowed two respected journalists to get closer to him than any others â€“ The Sunâ€™s well-informed John Sadler and ex-Times man turned master broadcaster, Brian Moore.

Sadler ghosted Cloughieâ€™s columns through all the tumultuous, turbulent and triumphant years. As a ghost of some experience, I found I was often having to exaggerate my subject’s views just to make them newsworthy. John once confided: â€œWith Brian, I have to put him on a tight rein to keep us out of the libel courts.â€

If anybody should write the definitive biography of Cloughie, itâ€™s Mister Sadler. 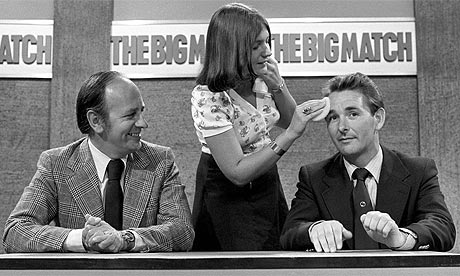 Cloughie and Mooro – shown in the picture above just before one of their regular TV appearances together on The Big Match – had much more in common than football. They shared sincere Socialist “old Labour” views, believed family counted above all else and liked to listen to Frank Sinatra records.

Speaking as the webmaster for the Wessex branch of the Sinatra Music Society, you can guess that Cloughie and I had the Guvnor as a mutual hero. Whenever I â€™phoned Brian for an interview, we would spend more time talking about the latest Sinatra record than anything remotely to do with football.

This brings me to a memorable cameo involving the two Brians, Clough and

I scripted and co-produced a 1990s documentary for ITV called Over the Moon, Brian, which featured Mooro looking back over his commentating career.

We took the cameras to Cloughâ€™s Derbyshire home for the final interview. Unbeknowns to Mooro, I had organised a framed cartoon drawing of him surrounded by the autographs of every major living British footballer, including legends such as Matthews, Finney, Best, Law and Charlton.

The idea was for Cloughie to come in unannounced to make the presentation as Brian was wrapping the programme.

The night before the shoot we spent a pleasant Â¬ if a little confusing â€“ evening at the Clough home with Barbara and Brian. I was accompanied by director and co-producer Brian Klein, which meant there were three Brians in their lounge. Cloughie insisted on playing his latest Sinatra album and singing along with it in a passable imitation of Olâ€™ Blue Eyes.

It was in these days that Brian was hitting the sauce, 20 years after the Leeds episode. He was as good as gold when we shot the main interview in his garden the next day. Then, while Mooro prepared to do his sign-off to camera, Cloughie went off secretly to collect the framed cartoon.

As Brian delivered his closing words in his usual professional style, Cloughie suddenly appeared from behind a hedge carrying the frame. To the surprise of everybody, he made his entrance singing Â¬ Sinatra-style â€“ Cole Porterâ€™s “Youâ€™re the Top”.

He sang the whole song, sitting on the knee of a bewildered Brian Moore, and finishing by saying: â€œMr Sinatra and Mr Porter say it much better than I ever can, Brian. Youâ€™re the top.â€

The last time I saw Cloughie was in September 2001, at the funeral and combined celebration-of-life for Brian Moore. I had been sitting at home just over a week earlier watching England destroying Germany 5-1 in Munich when I got a telephone call during the match from Simon Moore, telling me his Dad had died following a heart problem.

I was privileged to be trusted with the eulogy to my good friend, paying respects to Moore the Man, while Bob Wilson beautifully and emotionally talked about Moore the Broadcaster.

As I looked down on the congregation (400 shoe-horned into the Kent country church with hundreds listening outside) my gaze fell on those trademark George Robey eyebrows of the one and only Cloughie, and I managed to ad-lib how pleased Mooro would have been to see him there. Cloughie was seriously ill and he had made a monumental effort to get to the service, with Barbara, as ever, at his side.

Brian and I briefly hugged outside the church. â€œWell done, Young Man,â€ he said. â€œYou did our Brian proud. But if Iâ€™d been in that pulpit, I would have sung ‘Youâ€™re the Top’ â€¦â€

You canâ€™t top that.