NORMAN GILLER was less than impressed with some coverage of the news of an old friend’s sex change, while he thinks the Sportsman and Sportswoman of the Year titles are as good as decided

Sun headline writers are the wittiest, the wackiest and sometimes the wisest in the business. But when they miss the mark they can be spectacularly wrong. 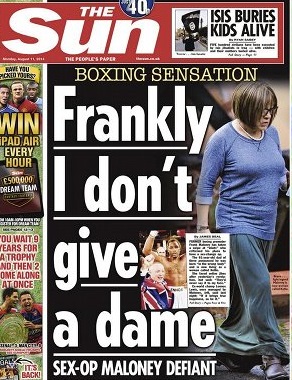 Having been out-Mirrored on the Frank/Kellie Maloney transgender story, they tried to be droll while playing catch-up.

Such a sensitive and serious story did not warrant their first edition front-page banner headline, “Frankly I don’t give a dame”. It was crass and tasteless.

Many have still not forgotten The Sun’s “Bonkers Bruno locked up” headline, when my old mate Frank was having treatment for a bipolar condition.

And The Sun’s approach to the Maloney story was in the same frivolous and callous vein.

Somebody on the backbench had the sense and sensitivity to realise it was vulgar and gender-phobic, and they had changed it to an edgier headline in the later editions.

Newspapers have not emerged well from the Maloney adventure. Kellie revealed on ITV’s Good Morning Britain that a reporter threatened to go public with her story against her wishes in February.

She also complained that journalists from another newspaper recently door-stepped members of her family.

“I wanted to transition very privately because of my family,” she told viewers. “They’re going through a lot as well and I wanted them protected.

“Unfortunately, someone exposed me at a group I was going to. I was indoors and one day you get that dreaded knock on the door. It was a journalist, I won’t say from which paper. Obviously I denied all knowledge of it and they said they were going to run the story on the Sunday, so I got my lawyers involved and we had to threaten injunctions. That had been going on in February and we kept it under control.”

Maloney finally decided to go public with the Sunday Mirror.

Fleet Street has to find a way of dealing with the increasing transgender stories with dignity and without any leaning towards sensationalism.

I HAVE KNOWN Maloney since he first came into the professional boxing world, and was as astonished as everybody else at the revelations about the sex-change.

Back in 1994, we had a stressful evening together when Lennox Lewis was defending his world heavyweight title against Oliver McCall at Wembley Arena. Manager Maloney was in on the secret that at the end of the fight Michael Aspel was going to climb into the ring and present Lewis with the This Is Your Life big red book.

I had written the script, and sat alongside Aspel watching the action. McCall sensationally re-wrote the script by knocking out Lewis in the second round with a looping punch out of the blue.

Maloney, ever the publicist, wanted to go ahead with the This Is Your Life tribute, but it was shelved despite the entire Lewis family having been flown in from their homes in Canada.

The next day I read my script in The Sun word for word. A member of the Lewis entourage, who had been at the first rehearsal, passed it on to them.

When the Maloney sex-change story broke I instantly sent a positive message, telling Kellie she will have my full respect and support, as in the past.

I can hardly imagine the turmoil she has been through before arriving at what is literally a life-changing decision. To see The Sun treat the subject so trivially makes me despair.

Frankly, I do give a damn.

I HOPE GOLF WRITERS are tugging at Rory McIlroy’s sleeve and telling him to keep Thursday December 11 free in his diary.

He will surely be picking up the Sportsman of the Year trophy at the annual Sports Journalists’ Association’s British Sports Awards lunch at the Grand Connaught Rooms.

Back-to-back majors have made the Northern Irish wizard of the greens a hot favourite for the top prizes at the end of the year.

A golfer has not picked up our coveted trophy since Nick Faldo won the award back in 1990. Sir Nick was voted No1 for the third time in four years after winning the Open and the Masters.

McIlroy will have competition from a queue of Commonwealth Games and European athletics medallists.

And apart from Winter Olympic gold medal dare devil Lizzy Yarnold, who can possibly pip wondermum Jo Pavey, winner of the European 10,000 metres title in Zurich last night, just short of her 41st birthday, for our Sportswoman of the Year award?

This is where we have it over the BBC and their Sports Personality of the Year vote: they cannot separate Rory and Jo in the vote.

It’s a gender thing on the agenda.

One thing’s for sure, our awards ceremony will be the sports lunch of the year. You will be wise to book your tickets early.