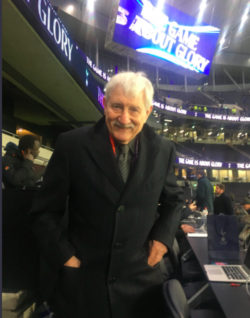 Norman Giller, honorary Life Member of the SJA and once our regular ‘golden oldie’ blogger, makes a welcome return to our website to mark the opening of Tottenham’s super new stadium that dominates the London N17 skyline. He posted this live from the press box during the build up to Wednesday’s match against Crystal Palace …

So here we are in Tomorrow’s World. It was 60 years ago last Boxing Day that I first reported from the White Hart Lane press box. Now I am privileged to be sitting in ‘the Media Centre’ and ready to watch the first Premier League match at a stately, state-of-the-art stadium that just takes the breath away.

For anybody from my silver-top generation of Tottenham supporters (I came out of the closet after giving up the No 1 football writer’s job at the Express to concentrate on TV, PR and authorship) it is a hugely emotional trip back to the future.

Tonight’s match against Crystal Palace ushers in a new golden age for Tottenham Hotspur, the biggest leap forward since that late summer’s night in 1862 when a group of local schoolboy cricketers met under a gaslit lamp post in Tottenham High Road and elected to launch a football club to take them through the winter months.

The well-educated pupils chose to name their team after 14th Century nobleman and warrior Harry Hotspur, whose descendants owned huge swathes of land in the Tottenham area. This included the marshes on which the first matches were played, with home-made goalposts carried to and from the pitch by the Hotspur boys.

Now that same land is overwhelmingly dominated by the billion-pound stadium in which I am sitting, in awe of the grandeur and towering splendour of what Spurs can boast is one of the finest football grounds in the world. It truly is magnificent. Take a bow club chairman Daniel Levy.

When I reported from the old, Victorian-built Lane for the first time back in 1958 the press box was tucked away at the back of the main stand behind the directors’ seats. There were no telephone points and copy boys had to race downstairs to dictate running match reports back to newspaper telephonists sitting at typewriters in their Fleet Street offices. These were the now defunct copy takers.

Reporters from those hot-metal newspapers that did not have a budget for copy boys had to choose the moment to dash downstairs and dictate their own copy, hoping that nothing significant happened on the pitch while they could only judge events by the roar of the crowd. 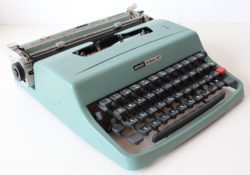 I wrote on an Olivetti portable typewriter, with carbon paper for back-up. Now I am sitting with my ageing fingers dancing on my Apple MacBook keyboard, connected directly to the internet and in a seat as comfortable as in a plush cinema. We are on another planet.

More than 100 reporters from around the world have a seat and a wifi-friendly desk allocated to them, and each has a 10-inch monitor on which to watch live action of the match that is just 25-yards away on the immaculate pitch that can, at the push of a button, be spun to give an alternative gridiron surface for the planned NFL matches. Yes, another planet.

Earlier I had sat eating succulent roast chicken in the impressive media restaurant area with queen of sportswriters, Dame Julie Welch, who broke all sorts of glass ceilings when becoming the first female football reporter in our man’s world more than 40 years ago. She is Tottenham’s official biographer, and is collecting material for a reprint of her history book to take in an opening ceremony of fireworks, fanfares and, finally, a football match.

Many of today’s top football reporters are there to chronicle this historic match, and a string of them – Henry Winter, Martin Samuel, Darren Lewis, Neil Ashton, Gerry Cox and Paul Hayward – come and pay homage to Julie and to prod this old dinosaur to see if I am still alive. The jury is out.

Julie and I were chasing headlines and deadlines when they were in nappies and we wondered how they would have fared ‘in our day’ when we were begrudgingly given a half time cup of tea and had to chase around in the car park for a hoped-for quote or snatch of team news.

The Tottenham press box has changed just a bit pic.twitter.com/dY142nKHKY

Now in the ‘auditorium’ the reporters sit in leather armchairs questioning manager Mauricio Pochettino at an after-match conference that is conducted by the hugely efficient Tottenham PR staff like a Presidential address.

Today’s journalists are spoon-fed background information and match details, but the challenge is just the same as ‘in our day’ to find the right words at the right time when that first whistle blows.

But because they send their words into the ether they do not have to clear the hurdles that faced us, with copy takers saying: “Are you staff …?” “How d’you spell your name …?” “Is there much more of this …?” “I can’t hear you because of the crowd in the background …” “I”m changing my typewriter ribbon, you’ll have to wait …”

Happy days, and neither Julie nor I would change our memories for the world.

But I do envy the reporters who will be filing their copy from Planet Tottenham in the years ahead. They will be witnessing and chronicling footballing history from the new Lane of Dreams.