Stand-by for 700 words of sheer self-indulgence. NORMAN GILLER’s got a book to plug, his one-hundredth

Ricky Tomlinson came to my rescue this week by agreeing to write a fee-free introduction to my 100th book, the story of my life and times.

My dear old mate Jimmy Greaves had originally volunteered to put his name to a foreword, but he is still battling to recover after his recent severe stroke.

I have written four “My Arse!” books with Ricky, compared to the 20 books published in harness with Greavsie. Ricky and I have also collaborated on several video and television projects, so he knows me well enough to write: “I would say this 100th book is evidence of a triumph of quantity over quality …”

Ricky, and his gorgeous wife Rita, are special people, who recently quietly and without fuss or fanfare handed more than £1 million to an Alder Hey Hospital charity that houses the families of sick children.

That’s called putting action where your mouth is, and I am privileged to have them as friends and Ricky’s name on my book. He adds in his introduction: “Anybody who can mention knowing Bobby Moore, Jimmy Greaves, Eric Morecambe, Muhammad Ali, Sean Connery and the Kray twins in the same breath deserves to have his story heard.”

I have finished the first draft of my book and am now about to read it. It has been an at times painful, wrist-cutting process, and I have not spared myself in sharing memories of a life that fits comfortably into the rollercoaster category.

Much of the book, of course, is about my sports writing experiences, and there are a few SJA memories that will make toes curl. I am calling it Headlines Deadlines All My Life, because that is what it’s all been about from when I first started writing for a living in 1957.

I have always been chasing a deadline, whether for newspaper editions, television programmes, book publishing dates or video and DVD scripts. The clock and calendar have been my constant competitors.

At the last count I made it that I have had more than 12 million words published, which is not bad considering I had a vocabulary of 367 words when I left school aged 14. It is amazing what you can achieve by juggling the same sentences.

Here’s a fact: I have had more words published than Shakespeare and Dickens combined, travelled more miles than Columbus and Captain Cook, been involved in more television production hours than John Logie Baird, and all achieved with a modicum of talent. 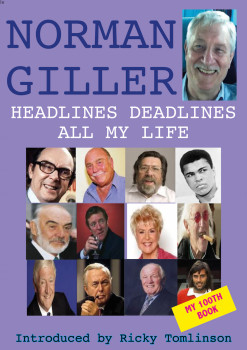 Wearing my cloak of arrogance, I am hoping my book will serve as an inspiration to anybody who has ever wanted to get published. As you will learn from my beginnings – The Kid from Cable Street – I started at the back of the queue in the bomb-blitzed East End, and if I can do it, anybody can.

Now comes the hard part: selling the book. If you would like to order a signed copy (no money at this stage) please email me at author@normangillerbooks.com or click here for further details.

I started out with a portable typewriter and carbon paper and chased my first headlines and deadlines in the days of hot metal, and am now functioning in the world of websites and social media, another planet. It’s been quite an adventure.

I am looking for a sponsor. I wonder if Emmanuel Adebayor could spare a few bob.

AM I ALONE IN thinking that the £860 million that swilled around the football trough during the summer transfer window was obscene?

I have written something similar to this before … when Martin Peters was bought by Tottenham in football’s first £200,000 transfer in March 1970, with Jimmy Greaves going to West Ham as a £54,000 makeweight.

This was a hurried deal in the last hours of transfer deadline day, when the window used to shut around about the Ides of March.

Peters, famously said by Alf Ramsey to be 10 years ahead of his time, and goal gourmet Greavsie were two of the greatest players of their generation, but back then it seemed like mad money.

If they were at their peak and had made the move on this week’s transfer deadline day, I reckon we would have been talking more like a £100 million deal. Yes, they were that good.

It’s about time football came to its senses and elected to close the transfer window before the season kicks off.

The current system causes nothing but aggravation for chairmen, managers and players and has an unsettling effect on everybody, including supporters.

With my Tottenham leanings, I counted the players that the “In the Knows” said on line were coming to Spurs during the summer. They came up with 72 names … and not one of them arrived at White Hart Lane.

Let’s close the window early, and get respite from those irresponsible people who turn gossip into fact.

As with all authored pieces on sportsjournalists.co.uk, the opinions expressed here do not represent the views or policy of the SJA. Readers are always welcome to post their comments on the content of this column and the rest of the site