It’s still kicking-off in Blackpool this summer. In June The Gazette’s football writer Steve Simpson was barred from a press conference at Bloomfield Road where the League One club was introducing Neil McDonald as the club’s new manager. 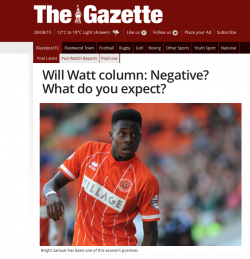 Watt’s plea didn’t fall on entirely deaf ears – FA chairman Greg Dyke is, after all, a former journalist. But Dyke said that, while he sympathised, there was nothing that he could do.

There the matter lay until this week when Blackpool FC issued a statement urging supporters to “seek accurate information” from sources other than The Gazette because the local paper had published “a number of inaccurate and misleading headlines or articles”. The club appeared to be particularly miffed over “recent negative headline” concerning the future of a young player, Bright Osayi-Samuel, who, claimed The Gazette, was about to be offered a new contract.

The statement, entitled, “Clarification” went on: “At a time when Neil McDonald is working to turn the club’s fortunes around, the Blackpool Gazette feels compelled to continue with a number of inaccurate and misleading headlines or articles.

“In a recent column, it was stated in the Gazette that the club was giving ‘preferential treatment’ to media partners in what was ‘basically a pay-as-you-interview scenario’.

“This has not been the case, as highlighted by the interviews the manager has done with eight different media organisations outside of match obligations.

“The club has made clear that it will favour sensible, balanced media alongside those that hold arrangements with The Football League this season.

“It is important that supporters continue to seek accurate information regarding the club on the official website and via other media outlets.”

Step forward fans’ group Blackpool Supporters Trust which placed itself firmly behind The Gazette, describing the club’s move as an “extraordinary” step, and accusing its of a “lack of transparency”.

Steve Rowland, chairman the trust, said: “It’s extraordinary from a Blackpool Supporters Trust and fans’ point of view that the club should be taking this step and not giving the local paper full access to what’s going on at the club.

“I think the fans are wise enough to know the score of what’s going on at Blackpool.

“There are two sides to every story. The football club are determined to put their own spin on things, it’s their prerogative, but they’ve taken exception to The Gazette.

“It beggars belief the local paper shouldn’t be allowed access to what’s going on and reinforces fans’ frustration at the lack of transparency at the football club.”

On its website The Gazette’s Will Watt wrote: “I could start this column with these words each week, but it’s been another interesting one at Bloomfield Road.

“Sadly interesting for all the wrong reasons as the club once again fail to give supporters anything positive to talk about.

“In last weekend’s match report I asked a question about the whereabouts of chairman Karl Oyston and my surprise he wasn’t at Bramall Lane after being banned for six weeks.

“Well at least now we know where he was, on holiday!

“The fact Oyston has chosen to go on a break when the club sit bottom of the League One table a week before the closing of the transfer window with his manager desperate for new signings doesn’t really need comment. It all speaks for itself.

“Yet again the club have accused the media of being negative about them, but what on earth are we supposed to write?

“Blackpool are currently rock bottom of the table, yet to win in all competitions, have a squad which even Neil McDonald admits falls short, and a fan base which many want nothing to do with the club …

“When the club, team and manager give us something positive to talk about, we will be more than happy to do so. Personally I’m desperate for a change of fortunes for the Seasiders, the sooner the better.”