Ahead of the athletics World Championships, which begin in Osaka this weekend, Steven Downes explains 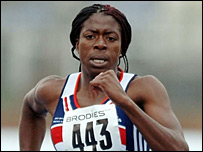 why, in all probability, 400-metre runner Christine Ohurougu can start planning ahead to run in next year’s Beijing Olympics

Itâ€™s official: Britain is off the Gold standard.

The announcement earlier this year that Tim Don, the triathlon world champion, had won his appeal against being subject to the British Olympic Association (BOA)â€™s ban from Games selection on all doping offenders ought not to have surprised anyone. It is also the prime reason for Christine Ohurougu (left), the Commonwealth 400 metres champion who is making her comeback at the IAAF world championships, to have total confidence that her appeal against a similar Olympic ban will succeed.

In May, Don was the 25th successful appellant against the BOA doping bye law in the past 10 years. In that time, the BOA has upheld its ban in only three cases. You could be forgiven for thinking that the bye law is a rule which the BOA does not want.

The rule was introduced when Sir Arthur Gold was chairman of the BOA in the early 1990s. Sir Arthur, a pre-war high jump international, was shocked by the apparent growing use of drugs when he headed Britainâ€™s athletics teams at the 1968 and 1972 Olympics. He spent much of the next three decades being a vociferous and earnest campaigner against the scourge of doping in sport.

The trouble was, Sir Arthur was too honourable for his own good.

One former very senior official told me of one occasion from the days before anyone realised that sports really ought not to be trusted to police themselves in doping matters.

Then, plain old Arthur Gold was in charge of anti-doping arrangements ahead of a meeting at Crystal Palace, when they had to choose “randomly” which events to test that night.

The official was aware that there might be a â€œproblemâ€ with a famous competitor in a particular event who might be â€œembarrassedâ€ if called for a drug test. For argumentâ€™s sake, letâ€™s say it was in the shot put.

â€œIn those days, we just numbered the events, and put the numbers in a bag, and Arthur would make the draw to choose which events would be tested,â€ the official admitted, shame-faced. â€œI thought about it, and decided just not to put the number for the shot into the bag.

â€œI knew Arthur was too much of a gentleman to bother checking that all the numbers would be in the bag before he did the draw.â€

Thus, we come back to the BOA bye law, Gold’s Law.

Poll after poll of British sportsmen and women suggest

overwhelming support for a life ban for drug cheats. Funnily enough, no one who has ever failed a drug test has ever endorsed that opinion.

In international athletics politics, Goldâ€™s antithesis was the Italian head of the IAAF, Primo Nebiolo. Nebiolo was much more of a pragmatist: â€œEven murderers do not go to prison for life,â€ this arch-politician would say. Thus, Gold was never able to push through a life ban in athletics.

But when Sir Arthur was given the top job at the BOA, he worked diligently to make Britain a world-leader with the hardest of hard-line rules. In theory, at least, no one convicted of breaking the doping rules can ever be picked for the British Olympic team.

The intention was laudable, the motives unquestionable. The effect, though, has been a growing sense of embarrassment, with a rule that no one appears to want to enforce, but which no one dares to rescind, and which might even prove to be legally unenforceable.

Since Craig Reedie succeeded Gold as BOA chairman in 1992, with Simon Clegg as chief executive, the uncomfortable

liabilities created by BOA Bye Law 25 have been evident. Appeal after appeal has been granted.

And yes, the appeals are heard by independent tribunals, but it would stretch the bounds of credulity beyond breaking point to suggest that these hearing panels do not take some advice or briefing on policy and attitude ahead of proceedings.

Take Donâ€™s case as an example. A prima facie offence had been committed, with three out of competition tests missed in an 18-month period. Don appeared to get off lightly from his sport: he was not immediately suspended, and so was able to compete, and win, the world title (pictured right). Then, the British Triathlon Federation handed him a bare minimum three-month ban, which was served out during triathlonâ€™s close season.

According to the BOAâ€™s own statement on the appeal hearing:

â€œThe panel was very critical of Mr Don most notably for the final missed testâ€¦ For that test Mr Don simply failed to be where he said he would be. Given there had already been the first two missed tests, the panel regarded this as indisputably careless and irresponsible of Mr Don.â€

And then the panel granted Donâ€™s appeal against the Olympic ban.

In the case of Ohuruogu, the chances are that any BOA appeal panel would be less critical; she has served a one-year ban from her sport, and at her hearing before the Court for Arbitration in Sport, they found that there was never any suggestion of anything more sinister than an administrative balls-up of immense proportions.

Of course, it would be easier all-round for the BOA, and considerably cheaper for appellants such as Ohuruogu, for the rule simply to be junked.

But there is not a sports official on the planet who wants to be accused of being â€œsoft on drugsâ€, certainly not BOA chairman, Lord Moynihan, who was once a Tory sports minister.

Thus, last month, when Moynihan parked the BOA’s tanks on the lawn of UK Sport with the announcement of a review of the country’s anti-doping policy, there was one small element in the brief that mentioned that BOA Bye Law 25 would be looked at.

Now, for all you cynics and conspiracy theorists out there, there are two ways this could go, but both would have the same ultimate effect. First up, the review group says scrap Gold’s Law as unworkable and unfair. Job done, and Moynihan does the responsible thing because a review group told him to.

The second possibility is that the review group says that, with some sports, including the IAAF’s Lamine Diack, back to wanting four-year bans for drug cheats, the BOA should keep Gold’s Law. That’s when the sneaky stuff comes in.

It would not take much for one well-funded case, despite the appearance of having strong grounds to succeed, to be denied their appeal to the BOA against the lifetime Olympic ban (the Ohuruogu case might be a prime candidate in many respects, with widespread public sympathy for her plight).

Then the hard-done-by athlete could go to court for a judge to rule on whether the BOA is acting unlawfully. Restraint of trade under European law is an obvious line of attack.

Such a test case, some well-placed legal opinion has it, would establish a precedent that would force the BOA – oh so reluctantly – to abandon its unloved bye law once and for all.

What are the odds on that happening a face-saving distance ahead of 2012?

Steven Downes is the co-author of Running Scared: How Athletics Lost Its Innocence and writes on athletics for the Sunday Herald