From Dan Sabbagh, Media Editor, The Times
Setanta was, for those not versed in 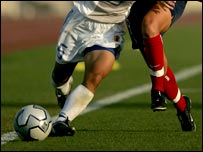 Irish mythology, the original name of CÃºchulainn, perhaps the most powerful ancient warrior king. These days, though, the name has been taken by a sports broadcaster, which in a few short years has built up a not inconsiderable mythology of its own.

It began in 1990 when it was founded to transmit the Holland versus Ireland World Cup clash live in a west London pub (in those days of very few channels, it wasnâ€™t on air in Britain because the game clashed with England versus Egypt). The companyâ€™s founders, Leonard Ryan and Michael Oâ€™Rourke, are fond of noting that, while there may have been more than 1,000 people in the pub at the time, many times that number have since claimed to have been there.

The second myth, of course, is that Setanta has already turned itself into a successful rival to the colossus of BSkyB. Everybody loves an upstart, but for all Setantaâ€™s achievement in building a business from scratch, and in bringing Des Lynam back for the occasional presenting gig, there is rather a long way to go, as a bit of simple arithmetic can reveal. Setanta may have shown its first football match but its real challenge is to ensure that it can start making money by the time the three-year deal ends.

Those hard-won Premier League rights cost Setanta Â£392 million over three years; Â£130 million a year. On top of that thereâ€™s the Â£13.6 million it pays to broadcast exclusively the Scottish Premier League, and there are other rights too, perhaps Â£11 million a year for US PGA golf. Add on various broadcast rights in Ireland â€“ the bundling of Racing UK (for horse racing fans) plus other bits and pieces takes the cost to about Â£180 million a year.

Next year, Setanta is going to show some FA Cup matches too; they cost Â£150 million for four years â€“ another Â£37.5 million

a year, taking the bill to around Â£215 million, which is enough money to buy Roman Abramovich a whole new team (just).

Now ask how many customers Setanta has got as the Premier League season begins. For a long time Setanta stuck to an â€œin excess of 200,000â€ formulation, but has more recently released a figure of 2.5 million, which sounds good compared with Skyâ€™s 6 million or so. Viewing figures at the weekend for Setantaâ€™s Aston Villa versus Liverpool clash were an encouraging 380,000 or so, around a third of those achieved by Sky for its Manchester United and Chelsea games, suggesting that those who have the channel are watching in not dissimilar proportions. Yet, look more closely at the 2.5 million figure, and the reality is more complex.

For a start, it covers the UK and Ireland. Setanta has long had a good business in the Republic, showing Premier League and Formula 1 in the country. Through a cable deal with UPC, 584,000 customers can watch its channel as part of their basic package; there are perhaps another 100,000 who get the service via Sky, leaving only 1.8 million for Blighty. Of those, 1.4 million get Setanta as part of Virgin Mediaâ€™s top-of-the-range XL package, without any extra effort; which means that the numbers of people who have paid up to get Setanta via Freeview or Sky in the UK is a modest 400,000 or so â€“ and donâ€™t forget that a lot of those are diehard Celtic or Rangers fans desperate for every last kick of Scottish action. The English appear not yet to have caught the bug.

Then ask how much money Setanta might be generating from all these subscriptions. This is a matter of guesstimation. The Virgin Media deal could be worth Â£40 million to Â£50 million a year (around Â£2.50 per subscriber per month); the direct Sky/Freeview business is currently priced at Â£9.99 a month; after VAT and costs, though, it will produce about Â£30 million a year. Then thereâ€™s a bit more to be added in for the Irish fans. A dollop of advertising income takes the whole annualised revenue figure to about Â£100 million. Thatâ€™s about half whatâ€™s required to break even, just accounting for the rights costs alone â€“ thatâ€™s before the marketing and production costs and, of course, the expense of Mr Lynamâ€™s wage bill.

Of course, all these numbers are estimates. Setanta is a private company, and doesnâ€™t have to provide any figures. Its income may be Â£20 million more, the rights costs perhaps Â£10 million less â€“ but on the evidence in the public domain, a few more customers are needed before the sums start adding up. Thatâ€™s not impossible; word will spread among football fans, although Setanta has to contend with customer defections (Sky loses about 12 per cent a year, but manages to win slightly new subscribers). At the moment Setanta is offering a Â£9.99 a month, no tie-in deal â€“ tempting for fans who might want to take a payment holiday in June and July.

Nevertheless, it is too early to write Setanta off. Mr Ryan and Mr Oâ€™Rourke may have started with nothing much, but they have brought in the money men; Balderton Capital, Goldman Sachs and Doughty Hanson (whose chairman, Nigel Doughty, has the same job at Nottingham Forest). A total of Â£213 million was raised in December last year and, with whatever borrowings it can muster added on to that, the broadcaster that began life transmitting in a pub has plenty of cash behind it.

So there is no danger of an ITV Digital situation. But at some point the venture capitalists will want their money back; Setanta canâ€™t simply invest for ever in the hope that it will gradually come right. After all, even CÃºchulainn was defeated in battle in the end, and he had heroic powers and everything else besides.

Sky v Setanta: the Â£1.7bn Big Match – click here for a review of the broadcasters’ performance