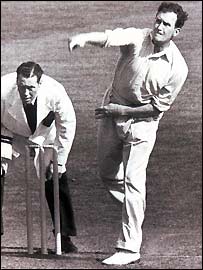 Somehow, he managed to include ice dancing.

Here’s Baker’s list, as if appeared in Monday’s Daily Telegraph.

Jim Laker: The scourge of Australia on a memorable day at Old Trafford, as pictured right

Geoff Hurst: The back-up who won the World Cup with his hat-trick

Torvill & Dean: So stylish they turned ice dance into a national obsession

Mark Spitz: Swam his way to Olympic history with seven golds in one Games

Frankie Dettori: Took the bookies to the cleaners and punters to seventh heaven

Steffi Graf: West Germany’s golden girl who won all there was to win in 1988

Jesse Owens: Versatile athlete who laid waste to Hitler’s masterplan for the 1936 Olympics

Nadia Comaneci: Romanian gymnast who beamed her way to greatness

Jonny Wilkinson: The extra-time hero of Sydney with the golden left boot

Baker admits there’s no Babe Ruth or Botham, nor Tiger or Nicklaus, nor is there any mention of Bannister or Coe. Are all his choices worthy ones? Or what are the other notable omissions?

Make your views known by posting a comment here.