Andrew Anthony reviews 2006’s televised sport
For all our problems with playing it, no one can match 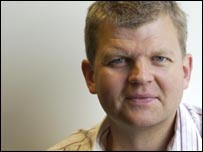 the British at filming football.

To watch the German camerawork and direction was to witness a perverse aesthetic. There were endless replays of meaningless corners but hardly any of what every fan wants: dubious offsides, thespian simulation and disallowed goals. Even the incident of the tournament – Zidane’s headbutt – was not picked up live by the cameras.

Second, to compensate for the commercial breaks – an irritation made into an insult by the preponderance of England players flogging mobile phones – ITV needed to have one mighty charming panel. Instead, they had Andy Townsend and Ally McCoist.

In the event, the BBC did to ITV what Argentina had done to Serbia & Montenegro. And playing the versatile utility role, like an Owen Hargreaves with a microphone, was Adrian Chiles. The affable pug-faced Brummie went so far as to write an epic poem in the voice of Berlin’s Olympic Stadium just because he could. It was the punditry equivalent of keepy-uppy, toying with the pedestrian opposition over on ITV.

And click here to nominate your broadcaster and sports programme of 2006 in the SJA Sports Journalism Awards.