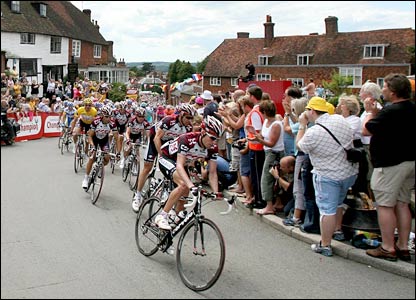 After this year’s Tour de France enjoyed a grand day out in London and a journey through the Garden of England (pictured above), Geoffrey Wheatcroft, author of A History of the Tour de France, makes a spirited defence of professional cycling – after all, which other professional sport is not without its corruptions?
For most people on earth today, sport plays a much larger emotional part in their lives than politics. The pattern of the modern year is dictated by the sporting season rather than the church calendar. Instead of Easter and Whitsun, we look forward to the Cup final, to the Open, to the Lord’s Test, to Wimbledon and the accompanying rain.

Far more of us care about Thierry Henry’s departure from Arsenal than about the shadow cabinet reshuffle. Perhaps that’s not much of a comparison: does anyone care about the demotion of Oliver Heald and the promotion of Jeremy Hunt? When England managed to win the Ashes the September before last, London saw much wilder celebrations than at any election, a reprise of Mafeking night or VE Day.

Sport is one of the few things that cuts across all lines of class and intellect. The poorest and humblest can be captivated by what athletes do with balls and bats, and so can the cleverest and grandest: whenever I visit Lord’s I remember sitting in front of the pavilion with my friend AJ Ayer, the philosopher, as he grumbled about the Middlesex batsmen and Mrs Thatcher.

But if sport excites us and unites us, it also bitterly disappoints us. Anyone can dream about the good old days, and no doubt most sporting golden ages, like other kinds, are illusory. And yet there is no illusion at all in saying that professional competitive sport is in the throes of a grave crisis. One game after another is stained by corruption, cheating and the horror of performance-enhancing drugs that, in the case of the blood-boosting hormone EPO, can enhance performance while

killing you. If you pay to watch sports, you are paying in the hope that the players you support will try to win. But at any cost?

On Saturday the Tour de France began in London for the first time since the great race was founded in 1903. If only this could have been a day for pure celebration.

For years bike racing, and the Tour in particular, has been shrouded in a miasma of scandal, with accusations of doping made against – and sometimes confessions of doping made by – half the Tour winners in living memory. Ken Livingstone, who had helped to secure the Grand DÃ©part for the city, says in his breezy way that doping is a thing of the past, which betrayed not so much optimism as plain ignorance.

Just as last year’s Tour was about to begin a lurid scandal broke with the news of an investigation in Madrid into the “sports doctor” Dr Eufemiano Fuentes. Several riders were summarily ejected as a consequence, including the favourites, Jan Ullrich and Ivan Basso. Now the German cyclist JÃ¶rg Jaksche has told Der Spiegel that he too used Fuentes’s services.

Almost worse is the news of the Kazakh rider Alexandr Vinokourov, this year’s favourite and a man whose reputation has so far been unclouded. He has just admitted to being a client of Dr Michele Ferrari, another “sports doctor”, who has been accused, convicted and then cleared of doping charges, and to whom any sane cyclist would give as wide a berth as possible.

But if cycling is in a bad way, it’s not alone. The Champions League was won this year by a team which should not have been competing at all – the victors, Milan, had been relegated for their part in Italy’s match-fixing scandal. But then the Italian football authorities were persuaded (rather like President Bush with Lewis “Scooter” Libby) that the punishment was excessive, and Milan were allowed back.

Every year at MCC dinners, pompous speeches are made and toasts drunk to “the spirit of cricket”, a phrase that may now need reinterpreting. Those of us who have always wondered why there is such a plethora of one-day cricket have learned the answer. One-dayers are an essential betting medium for the multi-billion Rupee south Asian gambling business – and an irresistible source of corruption.

We have seen a South African cricket captain (and born-again Christian) banned for life after he confessed to match-fixing, and anyone who thought that Hansie Cronje’s subsequent death in an air crash had drawn a line under the affair was sadly wrong. One senior British official working in international law enforcement has been quoted as saying he is sure that at least one of the games in the recent World Cup held in the West Indies was fixed. The game wasn’t identified by name, but many of us could take a stab at guessing.

The sheer power of money has had hateful consequences. For all the dreams of township kids, there are ugly overtones to the way European clubs scour Africa and whisk boys in their early teens away from home. But at least those footballers keep their identities, unlike some African distance runners exported to the Gulf states. The Kenyan runner Stephen Cherono turned up in Qatar as a citizen of the country, under the name Saif Saaeed Shaheen. Then three Brazilian footballers were registered as Qatari citizens to join a “national” team whose French trainer, Philippe Troussier, cheerfully said that “80% of my squad were not born in Qatar”. Though why stop at 80%? Perhaps we can look forward to a World Cup final one day in which both teams consist entirely of imported mercenaries.

In his Guardian column not long ago, the great French back Thomas CastaignÃ¨de said that he would not encourage his son to enter professional rugby nowadays, and anyone can understand why. But which of so many tainted and corrupt sports would anyone want to play any more?

And what do you think? Is sport fundamentally corrupting, or has it been corrupted? Post your views in the Comment box below