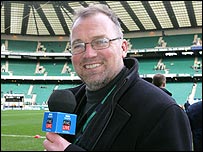 will cover his final match at the Guinness Premiership final at Twickenham today before retiring at the early age of 52, following a decade-long battle with Multiple Sclerosis.

Hignell, walking with the assitance of a cane, received a standing ovation from players and colleagues alike for a special presentation to mark his retirement at the Guinness Premiership Awards, staged at Stamford Bridge on Wednesday evening. The Rugby Writers’ Club and RFU were due to make a presentation to Hignell after the game.

His commentary today for Radio 5 Live will be at an historic occasion: 81,000 spectators expected at Twickenham, a record for a club fixture, for the season finale between Wasps and Leicester.

Hignell was a rugby and cricket Blue at Cambridge a little more than 30 years ago, where he was the first to captain the University at both sports. He was still a student when he won the first of his 14 caps as a big-kicking full-back for England, before going on to play rugby for Bristol and county cricket for Gloucestershire.

He made his England debut, aged 19, in 1975 in a brutal encounter with Australia in Brisbane – eight days later he was playing for Gloucestershire against Middlesex at Bristol, and five weeks later he made 60 in the Varsity match.

he continued playing rugby for Bristol and England in the winter while working as a history teacher and cricket coach (including at Bristol Cathedral School and Sherborne School), and cricket for Gloucestershire in the summer. He won the last of his 14 England rugby caps in 1978-79 and retired from first-class cricket in 1983.

He has covered every major rugby event, both home and international, since 1991. From 1989, he commentated on World Cups and Lions tours for HTV, then joined 5 Live in 1996.

Speaking last year about his illness, Hignell described himself as “lucky”.

“I am lucky also that, while my MS affects my limbs – my right leg does not do half the things I want it to do, and my right arm appears to be on go-slow – it does not, as it does for some people, affect the voice or the eyes.

“My problems can therefore be managed; by using an electric buggy, by living in an apartment with no stairs and no garden, by a support worker who drives me around the country, by a speech recognition programme on my computer, by a further session of physio at Kinetic Fitness Studios in Bristol every Thursday and by my Monday re-charge at the Treatment Centre in Nailsea.”

Barry Newcombe, President of the Rugby Writers’ Association as well as chairman of the SJA, paid tribute, saying, “Alistair was a throwback to the time when gifted sportsmen were able to reach the top in more than one sport, and he brought his versatility and dedication to the press box.

“BBC colleagues speak glowingly of his dedication to the task in last year’s Rugby World Cup in France with its demands on stamina and concentration.”