NORMAN GILLER goes wild for slopestyle and the Sochi Olympics, in common with some BBC broadcasters

Ever had shingles? My advice? Don’t!

I feel as if I have taken a tumble on the Sochi slopes, and then been whacked on the blindside by Craig Bellamy. But I laughed through the pain when watching Britain’s snow maiden Jenny Jones snatch her historic bronze medal at the Winter Olympics.

BBC commentators Tim Warwood and Ed Leigh – joined by bubbly snowboarder Aimee Fuller – delivered one of the most unprofessional and jingoistic commentaries in the history of British broadcasting. And they came up with television gold.

The clip will be repeated time and again, and will be up there with the Brian Johnston and Jonathan Agnew “leg-over moment” on Test Match Special that had the nation roaring with laughter.

What an advertisement Jenny Jones is for her sport. I had not witnessed slopestyle snowboarding before. A “360 grab” and a “huck” were not in my vocabulary.

But Jumping Jenny winning Britain’s first ever Olympic medal in the snow has opened millions of eyes to the discipline, technical skill and bravery needed for slopestyling. Here’s one old hack that would not have the courage to attempt it (particularly with my shingles).

It’s been a cracking Olympics so far for television limpets like me. The opening ceremony was stunning, despite President Putin’s English making him sound perfect for a James Bond villain, and the failure of one of the giant graphic snowflakes to morph into an Olympic ring.

My full respect and admiration for Clare Balding, going ahead with her presentation work and not giving in to the Twitter trolls attacking her for selling out on the gay community for profit. In my view she is comfortably the best sports presenter in British television, and Balding knows that boycotting the Games would not have made a pinprick’s difference to the Russian stance on the gay issue.

By insisting on going through with her assignment, Balding is showing Putin and Co that here in the UK we are mature, sophisticated and liberated enough to allow people to follow whatever road they choose. 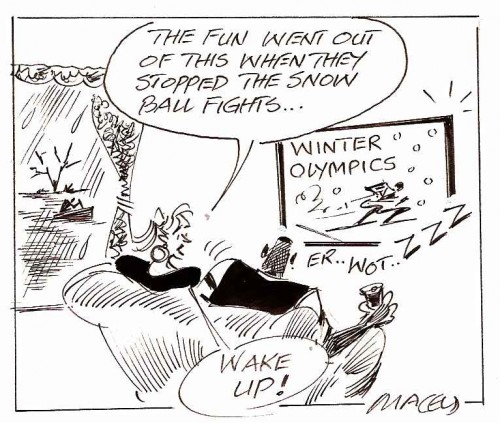 Balding, in a partnership with radio presenter Alice Arnold, tweeted in response to the charge she was choosing profit over principle: “I’d make more at home, be safer and have an easier life. The reason I’m here is to do my job. Visibility before avoidance #pride”

Arnold came out fighting for her partner, and tweeted to one imbecile: “Clare Balding should be buried alive the fat dike”? … Just to remind us that Russia is not the only country with homophobes.

All in all, I am getting the most feel-good Winter Olympic vibes since those perfect six days of Torvill and Dean, 30 years ago this week.

It’s enough to make me put my shingles on ice.

Must go … here comes the curling.