By Philip Barker
Whatever fate befalls England in the World Cup, one member of the media party following the team is already sure of a trip to Buckingham Palace on his return. Mike Ingham, the BBC’s chief football correspondent, was created an MBE in the Queen’s Birthday honours.

“Apart from my family, the two greatest loves of my life have been radio and sport, so to be recognised for those two things is beyond my wildest dreams,” he said.

Ingham cut his teeth in local radio in Derby and London before joining the BBC’s Radio Sports Unit in 1979. After he presented coverage of Euro 80, he became a regular host of Sport on Two in an era when Des Lynam, Alan Parry, Ian Darke and Peter Jones were in their pomp. He became a commentator in 1984, and covered the Heysel Tragedy in 1985.

Ingham’s all-round broadcasting ability saw him chosen as a radio commentator for Princess Diana’s funeral. But it is his insightful coverage of football which saw him promoted to the succeed Bryon Butler as the BBC’s football correspondent in 1992 and led to his recognition in the honours list.

Fred Dinenage became familiar to national TV audiences as the stand-in presenter on ITV’s flagship World of Sport in the 1970s and 1980s when regular host Dickie Davies was unavailable. But Dinenage, now 68, has long been a stalwart of 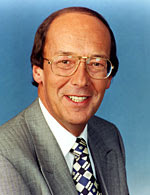 local TV news in the south of England (as well as being the host of children’s show How?), all of which has contributed to his work being recongised with an MBE.

Dinenage, left, echoed the thoughts of many sports reporters when he said, “I’m being honoured for enjoying myself.”

Dinenage had begin his career at the Birmingham Mail as a tea boy and worked his way up with the Brighton Argus before joining what was then known as Southern TV.

He’s still there in the latest incarnation as a presenter of Meridian Tonight.

No doubt a few bottles were cracked open in the BBC Grand Prix commentary box in Montreal at the weekend to toast David Coulthard’s MBE, too .

Frank Duckworth and Tony Lewis will also head to the Palace, but will these cricket statisticians try and explain their “method” to Her Majesty? They’ll probably make do with the MBE.

Amid all the celebration, there is one poignant note. England rugby giant Andy Ripley made a huge impression at the 2007 SJA Sports Awards with his impassioned speech in support of research into prostate cancer. He has already received his insignia because sadly, his own cancer has returned and he is seriously ill. We wish him well.