PHILIP BARKER remembers the last Cricket World Cup to be staged in Australia and New Zealand, which was a long innings and saw broadcasters using night-watchmen for the tournament

Alastair Cook was right about one thing during his reign as England’s one-day cricket captain.

He described the Champions Trophy as the best of all limited over competitions because “it only lasts two weeks”.

Cook is far too young to remember the first World Cup 40 years ago. In 1975, when the then 60 overs international version of the game appeared to be only tolerated on a trial or probationary basis, the tournament lasted exactly a fortnight and culminated with a thrilling final at Lord’s which only ended at 8.40 in the evening.

The West Indies of Lloyd, Boyce, Holder and Richards beat the Australia of the Chappell brothers, Lillee and Thomson by 17 runs. When it was all over, the world of cricket was left wanting more.

What has happened since seems to be a deliberate attempt to demonstrate that you really can have too much of a good thing.

When the 11th World Cup gets underway in Christchurch on February 14, with New Zealand taking on Sri Lanka, that will be just the first of a grand total of 42 pool matches to be played over the coming weeks. The month-long group phase won’t conclude until Ireland play Pakistan in Adelaide on March 15. With quarter-finals and semi-finals to come, the final in Melbourne isn’t until March 29, a full 44 days after the tournament begins.

It speaks volumes for how the game has developed that Simon Hughes, now editor of The Cricketer, began his 2015 World Cup preview edition writing of “an opportunity missed. As usual it is far too long”. Instead of excitedly looking forward to the latest CWC, players commentators and journalists actually dread it.

It was at the third staging of the World Cup, in post-Packer 1983, that marketing men first sank their teeth into the tournament by insisting that each team played each other twice in the group stages. But it was not until 1992 that the competition became a seemingly never-ending behemoth. In the first round everyone played everyone else. “It was the Cup that thought it was a league,” one wag wrote at the time. 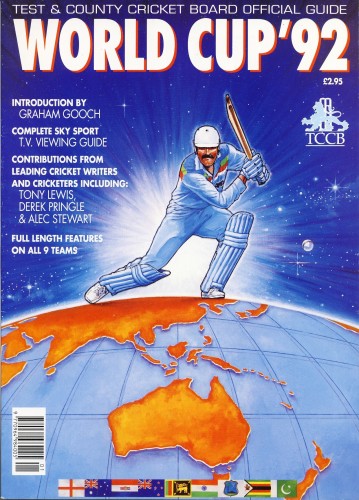 That was the last time the World Cup was staged in Australia and New Zealand. Big, bold and brash, that fifth World Cup was played under the lights with white balls and pyjamas.

In Britain, previous tournaments had been transmitted on the BBC, but for the first time, Sky Sports had exclusive UK television rights. Presenter Charles Colvile introduced the entire tournament from a small studio in Osterley in west London, rather than the warmer climes of Australia. “Not quite as warm as Melbourne or Sydney, but still for a self-confessed crickaholic like me, it sounded like Nirvana and the Elysian Fields rolled into one,” he said.

The man who eventually succeeded Colvile as Sky’s main cricket presenter did make it to Australia. David Gower, ignored by England’s selectors, was snapped up as a television and newspaper reporter.

Sky took coverage provided by Australia’s 9 network, the one made famous by Kerry Packer all those years before, with a total of 163 hours of live cricket and every match covered. What a contrast with 1983 in England, when Kapil Dev’s magnificent 175 against Zimbabwe at Tunbridge Wells went unrecorded by the host broadcasters. Ever since, Kapil has been desperately trying to find a man in the crowd who it was rumoured had shot it all on home video.

In 1992, New Zealand sprang the first surprise by beating Australia in the opening match. A few hours later, England began with a win against India.

The re-entry entrance of South Africa to World Cricket was keenly anticipated. They had been absent from the first four tournaments, banned because of apartheid. They beat Australia in their opening match and made good progress towards the semi-finals. En route, they played West Indies for the first time. Even five years before, such a contest would have been impossible.

Donald Woods, the author of Cry Freedom, was commissioned to cover the tournament for BBC World Service, but he made a brief visit to the Sky Studios. His delight was clear. On another occasion, Wes Hall, the former West Indies pace bowler, dropped in, aged 51 still an imposing figure. More poignantly, David “Syd” Lawrence appeared on crutches, weeks after his England international career was ended by a sickening knee injury.

Every “lunchtime”, that is between 1am and 2am, we had a phone-in sponsored by a mobile company. Even at this ungodly hour, the lines were buzzing. Callers included Alex Higgins, the snooker world title-winner, watching the cricket coverage in some hotel.

After almost a month, the tournament’s first phase finally came to an end and we had our four semi-finalists: Pakistan beat New Zealand in Auckland, and in Sydney, South Africa chased 253 to beat England. It was all bubbling up nicely when the rain came with South Africa needing 22 off 13 balls.

Ten minutes later, play resumed, but now the target was adjusted to 21 off one ball. “Farcical” was the mildest assessment. What was even more frustrating – the tournament regulations actually provided for a reserve day. The Australian host broadcasters made sure that never happened.

Martin Johnson, writing in The Independent, called it “a finish so bizarre, that had the Martians landed at Sydney Cricket Ground, they would have concluded there was no intelligent life on earth and gone home.”

Robin Marlar suggested that  Australia should not be allowed to stage another World Cup for 30 years. “It was a clear case of a television station dictating rather than responding to a sporting programme,” Marlar wrote in the Sunday Times.

At the official dinner before the final, an Australian comedian said some rude things about The Queen. Graham Gooch and Ian Botham both walked out. The very notion of an Australian Prime Minister one-day conferring a knighthood on Prince Philip seemed fanciful, to say the least.

The Labour Party leader Neil Kinnock was unhappy about Sky Sports, too. His target was the exclusive TV rights. He wrote to the cricket-loving Conservative Prime Minister John Major, asking him “to use his good offices to persuade Sky Television to make the Cricket World Cup available to all channels”.

The BBC did eventually screen highlights of the final on Sportsnight, by which time most of the nation was already aware that England had lost to Imran Khan’s Pakistan. England has not managed to reach the tournament final since.

The real winners of the 1992 tournament were Sky. Their position as the channel for cricket had been established. They sold an extra 26,000 dishes. And later that year, they announced that they had bought the exclusive live rights to the new FA Premier League. And the rest, as they say, is television history.