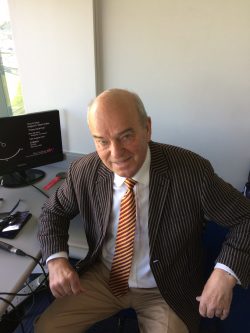 The announcement came via Twitter to his 38,000 followers. BBC sports reporter and supreme broadcaster PAT MURPHY had retired from full-time broadcasting after almost half a century at the mic.

Cricket fans will know him from 18 tours with England, reporter for Test Match Special, and dozens of books.  Football followers will recognise the mellifluous tones of the voice of the Midlands, who formed close relationships with Brian Clough and Graham Taylor, and, again, wrote dozens of books.

Here MURPHY (right)  looks back on a career which started in June 1970 at the Peterborough Evening Telegraph….

There’s no drama attached to me calling it a day as a full-time BBC sports reporter after 47 years in the business. Just that time span.  Back then I was a young shaver with barely a clue what I was supposed to be doing. Bobby Moore had just been linked with a certain bracelet in Bogota and England had a realistic prospect of winning the World Cup. It was that long ago….

There’s simply a defined fork in the road for me now, having decided that I’ve run out of that particular road. I’ve always tried to be in charge of my own destiny, a weighty ambition in this precarious profession of ours. Keep one step ahead, if you can. In my first week in the BBC sports department in November 1981, I attended an editorial meeting, at which someone crassly enquired out loud whether a certain illustrious bulwark of the broadcasting group was now sounding a little old on air?

At that moment, at the start of my BBC sports career, I vowed no one would ever say that of me. I would get out before folk started to think about giving me the tap on the shoulder. Go before they think you should go. I hasten to add that my boss Ben Gallop has been tremendously positive and thoughtful, giving me no indication that others felt I should fold up my tent. So I’m very content that I’m leaving on my terms.

That’s my last day done as a full-time reporter,after sailing 47 yrs before the mast,43 with the BBC. Will only be doing football now on 1/2

I’m chuffed to be allowed to remain involved in Sports Report on Saturdays. That is still THE programme that any radio sports reporter wants to be on. The signature tune that’s introduced it for almost 70 years, the flexibility that allows the producer to whizz from one sports arena to another live, the sheer historical sweep of its tenure.

I didn’t realise it, but my ambition to be a regular on Sports Report was ingrained in me when I was a boy. In November 1981, after my first appearance on the show, my mother rang me that night to congratulate me. She recalled that when I was seven, surrounded by my parents and two brothers, listening to Eamonn Andrews introducing Sports Report, I blithely announced at the kitchen table, ‘I’m going to work on that programme one day’. I was delighted for my mother that night , 27 years on, but even more so for myself.

Sports Report on Saturdays. That is still THE programme that any radio sports reporter wants to be on

Today in the febrile, hyperbolic, TV-generated world of the Premier League – aka the First Division to some of us – Sports Report lacks the cachet to many of the key figures in football. Foreign managers and players haven’t a clue who you are as they are ushered towards you in the tunnel by harassed press officers who are being bullied by the multifarious TV wallahs.  No matter. The programme still stands to many of us as a beacon of sustained excellence.

I remember Graham Taylor’s unwitting tribute to the programme one January day in 1988. The peerless Peter Jones, characteristically elegant in dinner jacket, was presenting the 40th anniversary of Sports Report back in Broadcasting House and I asked Aston Villa’s manager to come on the show, mentioning the special occasion.

Graham was so touched. ‘Give me a minute, Pat,’ he said, ‘I need to phone my Dad so he can listen. He’ll be so pleased I’m on’. 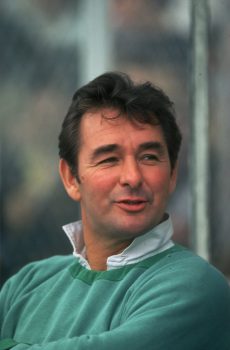 The unique Brian Clough (left) was another admirer. He was rarely off Sports Report in the 1970s but the following decade he rationed his appearances. In December 1986 I prevailed on him to come on the show after a gap of five years – only as a favour to me because I was flying out to cover the Ashes tour in Australia the following day.

Cloughie made it quite clear to me that he was granting that rare interview out of respect to Sports Report, not to this hapless reporter – who then spent the longest eight minutes of his career, because I had forgotten to tell him the interview was going out live! We always dreaded the salty Clough vocabulary whenever he was live…

We took a chance on a live programme amid the euphoria of victory as we broadcast an hour in the England dressing-room at the Oval in 2005, when the Ashes were regained after 16 years. Champagne everywhere, yours truly swigging from a magnum of it, courtesy of Marcus Trescothick, while at the same time conscious that the odd expletive has been uttered at such a time.

No time to tell the players about matters of taste – but mercifully and memorably we got through it unscathed. And I shan’t forget the grace of Brett Lee and Adam Gilchrist for coming on air also, after they had come in to offer congratulations from the Australian camp.

That 2005 Ashes series remains one of my happiest times because it underlined over a seven week period that although the combat may be fierce, it is, after all, only sport. The mutual respect in that series was tangible on the field and when Lee and Gilchrist appeared in England’s dressing-room afterwards, the affection was unforced and genuine.

Having been on the scene distressingly quickly to report on the Birmingham pub bombings in 1974 and then producing the radio Outside Broadcast at Hillsborough in 1989, I have always tried to steer away from words like ‘tragic’ and ‘disaster’ when reporting on sport

That’s the way sport should be reported on and played. Having been on the scene distressingly quickly to report on the Birmingham pub bombings in 1974 and then producing the radio Outside Broadcast at Hillsborough in 1989, I have always tried to steer away from words like ‘tragic’ and ‘disaster’ when reporting on sport.

My esteemed colleague Mike Ingham once referred to our trade as ‘organised loafing’ and he’s right: a sense of detachment and wry debunking are necessary. The players are doing their best but we reporters should never jib at saying they’re rubbish. A healthy douche of irreverence amid the fatuous hysteria never goes amiss.

So I shall continue in that vein on Sports Report every Saturday while pursuing other avenues with a light heart during the week. I shall do the odd lecture to media studies tyros, offering them what passes for advice, advising them that it’s never been tougher to be a sports reporter.

Having given up cricket reporting, I shall enjoy next summer smelling the roses – my first summer off since 1969. Somehow I’ll cope with absenting myself from the horrors of motorway travel.

And all the while I shall content myself with getting away with it for almost fifty years. It was never a proper job.