NORMAN GILLER polishes his brassie and dusts off his mashie niblick to brandish at anyone who suggests that the BBC’s chief golf commentator is not a national treasure, while 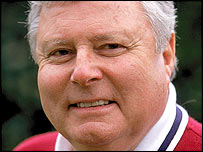 As The Open gets into full swing at Turnberry, I bow the knee to doyen of commentators Peter Alliss. My study window looks out on the Ferndown golf course here in dozy, delightful Dorset, where his father, Percy, was the club professional and young Peter first started conquering the game more than 60 years ago.

Peter Alliss, left, is a pitch shot short of his 79th birthday, and the money is on him to beat the Peter O’Sullevan record of commentating for the BBC at 81. It’s the only time Alliss will want to have more than 80 on his career card.

I had the privilege of scripting his This Is Your Life tribute from Eamonn Andrews in 1985. This was when he was at the peak of his broadcasting output, including the excellent Around with Alliss.

There has been a growing campaign to drive Alliss into the deep rough ever since he lost his bearings at the Masters five years ago, declaring, Kenneth Wolstenholme-style “it’s not over yet”, as Phil Mickelson holed the winning putt.

But this was a rare Alliss shank during a marathon at the microphone. He is popular on both sides of the Atlantic and has gathered an army of admirers (and quite a few critics) with his folksy, conversational style of commentating. He is a national treasure, and it will be a brave â€” perhaps foolhardy â€” BBC executive who tells this very self-assured man that itâ€™s time to put down the microphone.

The Voice of Golf habitually lives in the past with his reminiscences and comparisons, but as a creaking old git, I find this reassuring. His silver tongue can become stiletto-like when discussing the performances of some of the modern players, but 23 tournament wins and eight Ryder Cup appearances give him authority to go with his acidity.

Alliss is not famously modest, but is always quick to say that he cannot hold a candle to the man he followed into the commentary box, the untouchable Henry Longhurst who combined sublime golfing observations for viewers with 40 years as the Sunday Times correspondent.

The BBC now seems to be grooming Sam Torrance as successor to Alliss, a good, safe choice â€” but will he ever be as outspoken and controversial as his 1991 Ryder Cup team mate David Feherty, who scorches the microphone with his comments for CBS?

I was on the other side of the Pond last year and tuned in to hear Feherty, pictured right in action out on the course, in full flow in his commentary, and wondered if the BBC dared invite him into their team. In the States, he is known as the leader of the Tiger Woods fan club,

and he is a great raconteur.

Here he is capturing the magic of Tiger in a blog entry he wrote last year:

â€œIâ€™m walking down the 18th fairway at Firestone Country Club with Ernie Els and Tiger, who has popped up a three-wood about 40 yards behind Ernie into some wet, nasty, horrible, six-inch rough.

â€œTigerâ€™s cursing and taking clumps out of Ohio with his three-wood. And, of course, weâ€™re not showing this on TV because we want to be able to interview him later. Ernie and I walk past Tigerâ€™s ball, and it is truly buried.

â€œErnie is tied with Tiger and heâ€™s in the middle of the fairway. Iâ€™m standing with Ernie and my microphone is open. Ken Venturi [in the CBS booth] sends it to me and I say, â€˜Tigerâ€™s got 184 yards with two big red oaks overhanging the green. Heâ€™s got absolutely nothing. With a stick of dynamite and a sand wedge I might be able to move this ball 50 yards. Steve Williams [Woodsâ€™ caddie] tells me [with a hand signal] that heâ€™s using a pitching wedge.

â€œTiger takes his swing. Every muscle in his body is flung at the ball. It looks like heâ€™s torn his nutsack. The divot went as far as I could hit the ball. Iâ€™ve got my microphone at my mouth thinking, what the hell was that? The ball sails over the trees, lands behind the hole and backs up to about six feet from the flag. I open my microphone and Ernie turns and says, â€˜Fuck me!â€™

â€œMy producer comes on in my earpiece and says, â€˜Was that Ernie?â€™ I say yes. He says, â€˜Fair enough.â€™

â€œI could have described that shot for 15 minutes and not done as good a job as Ernie did with two words. This is one of the best players in the world talking, and you wanna know how good Tiger is? Ask Ernie Els.â€

And Feherty talks as well as he writes.

While I’m in golf story mood, how about this from the American television golf world? During a PGA golf tournament a commentator offered an exclusive insight into Arnold Palmer’s game. “One of the reasons Arnie is playing so well,” he told viewers, “is that he has a superstition. Before each tee shot, his wife has to take out his balls and kisses them…”

There was a slight pause followed by: â€œOh my God, what have I just said?”

One more before I get back to watching the Open on the box, with the incomparable Alliss conversing at the mike: in Colin Montgomerie’s overweight days, the temperamental Scot was playing a tournament in the States and was

walking back through a gallery of abusive American fans who were giving him a hard time. This was in the period when he was spitefully nicknamed Mrs Doubtfire.

Monty ignored him and kept walking.

The good manners paid dividends. Monty stopped and turned to the spectator, who shouted: “Nice tits.”

To his great credit, Monty just shook his head and continued his walk.

I think Peter Alliss would have found the words to put down the heckler. “And you, sir, have a big mouth â€¦ mind you don’t fall in.”

As I look out at the course where it all started for him, I think of all the pleasure he has provided over the years. It has been Alliss in wonderland.

Norman Giller’s latest book, The Lane of Dreams, is now available in all good book shops, and a few bad ones as well. Or you can cut out the middle men and order it directly, online, by clicking here.