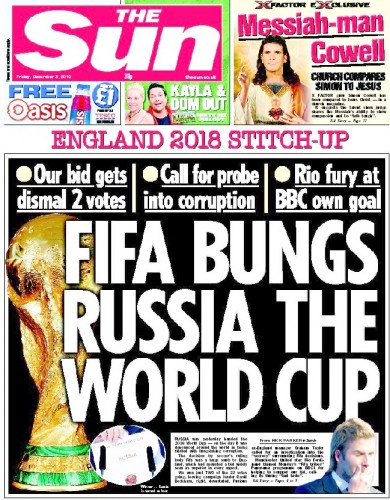 “Today The Sun makes this plea to Mr Blatter and Fifa: don’t be put off by the BBC’s rehashing of ancient history. Despite BBC muckraking, The Sun trusts Fifa to put football first” The Sun editorial the morning of the vote, a day before its “bung” front page.

“The evil of the media” Blatter‘s allegedly final remarks to the members of the FIFA executive before voting.

“The last thing those guys hear before they go and tick the box is ‘the evil of the media’. That is not helpful and actually inaccurate. I was told by someone who was in the room that that’s the last thing they were told by Sepp Blatter. There was a final sum-up before they voted and I think it was at the beginning of that. That’s not helpful to our cause” Andy Anson, leader of England’s failed 2018 World Cup bid.

“I think, according to FIFA we had the best technical bid. No one could identify any risks of coming to England. I think we had the strongest commercial bid and the country is passionate about football. But it turns out that is not enough. It is hard to see what more you can do, but in the end it turns out, having the best technical bid, commercial bid, the passion for football, that is not enough” Prime Minister David Cameron‘s criticism of FIFA’s voting process is barely disguised.

“England got lowest votes, 2!!! How the fuck? Something really can’t be right there” Rio Ferdinand, the England captain, on Twitter.

“It’s like going on X Factor and then meeting up with the judges for a couple of days and saying: ‘I’m a sexy bird'” Harry Redknapp sums up the FIFA voting system.

“Countries in western Europe need to realise that they don’t have a God-given right to stage these events all the time” Mike Lee, PR guru who worked on London’s 2012 Olympic bid and guided Qatar to status as 2022 World Cup hosts.

“Of all the asinine questions reporters feel constrained to ask to fill the unforgiving minutes on a breaking news story, much the flabbiest is, ‘What’s the mood like there?’ and as the minutes before FIFA’s announcement turned into what felt like hours, the BBC went mood-gauging bonkers. Matthew Amroliwala, our man outside the conference hall (there was one more inside, and another standing in the corridor) put the key question to our man in Buckinghamshire: ‘Mark, you’re in Milton Keynes, give us a sense of what it’s like there’.” Martin Kelner‘s weekly sport on TV review. This is not one of the funny bits: this actually happened.

“There were other votes we thought we were going to get that would have taken us way into the second round and beyond. Some of those didn’t materialise, I don’t know which ones. When people look you in the eye and promise you something, you hope they live up to their word, but clearly that hasn’t happened” Anson, after suggesting that the British press was “unpatriotic”, belatedly discovers that international sports officials are not entirely trustworthy.

“It is almost amusing that the lickspittle leader of England’s bid, Andy Anson, now rails at the duplicity of FIFA executive committee members, having spent the last year selling reality down the river by by calling any criticism of football’s governing body unpatriotic.

“Now, reading between the lines, the England 2018 message is that the FIFA ExCo is populated by chisellers, liars and, quite possibly, crooks. We know, thanks. This is what we have been trying to tell you” Martin Samuel in the Daily Mail.

“On the way home, I thought about Anson’s indiscretion. How did he know which members were ‘buyable’? What kind of research had they done to reach such a conclusion? Had the matter been raised with FIFA’s so-called ‘ethics committee’? And which nation was most likely to ‘buy’ them? If these people were so blatantly for sale, then somebody must be preparing to pay their price” Patrick Collins recalls a dinner with England 2018 earlier this year when Anson claimed 13 FIFA ExCo members were “buyable”..

“The job of the media is not to protect power from embarrassment” Sir Simon Jenkins, writing in the Guardian on the leaking of the US embassy cables.

“Thank goodness for journalism. I am sorry we did not get the World Cup but, had we done so, it would have been mired in claims of dishonesty. In losing, we had the honour of seeing British journalism doing something to clean up a disreputable sport. That is the cup I would prefer to win” Sir Simon again, this time endorsing the work of Andrew Jennings (surely a first?).

“My sport is a naked sport. Everyone just walks around in their trunks. It is what we do and completely normal. The photoshoot shows off my sport and that is all I wear when I compete and when I train. Wearing just my trunks only bothers me when I have come back from holiday and I am a bit podgy” Tom Daley, the 16-year-old Commonwealth Games double gold medallist, dismisses criticism of a “sexually exploitative” photo shoot.

“This is dream stuff” Graeme McDowell, a candidate for the SJA’s Sportsman of the Year, after making up a four-stroke deficit and won a play-off to beat Tiger Woods to the Chevron World Challenge.

“Players remain free to play outside England but you need to understand that it is our absolute intention that we only select from overseas clubs in exceptional circumstances. It is for you and your agent to decide if you are willing to take that risk” John Steele, the RFU’s new chief executive, in a letter to players and their agents over selection of England teams after the 2011 World Cup.

“People call you a bigot but the problem is with them, not you…  I refer back to my work and I see that what I have said and written is merely a matter of opinion expressed without prejudice but with honesty” Brian Moore, the former England rugby hooker, now Telegraph columnist and BBC commentator, whose autobiography was last week named Sports Book of the Year.

“A year ago, I walked into Rupert Murdoch’s office in New York with £1 billion in my pocket. I said I wanted to buy News International for £1bn. Rupert said he didn’t want to sell but he acknowledged it was a good offer” Richard Desmond, owner of Express newspapers and Channel Five, in a Management Today interview.

“You can’t conduct business without disagreements or disputes. I prefer to sort it out legally. But I tell you something about all the boxers I’ve worked with and who walked out on me… I can look every one of them in the eye and challenge them to say that I ever cheated them. They can’t. Not man to man” Frank Warren on 30 years in the big fight business.

“Australia are the new England. Their bowlers are ordinary and their fielders are even worse. They know not what their best team is. ‘Who do you reckon they’ll play in Perth?’ said someone in the press box today. ‘Just pick ‘em out of a hat,’ came the reply. The schadenfreude is everywhere” Steve James in the Sunday Telegraph.

“The scoreboard has asked for salt tablets. It might cramp up” Kerry O’Keefe on Australian radio, as England cranked up 620-5 in their first innings of the Ashes Test in Adelaide.

“Just want to apologise for not walking off the ground tonight when I hit the ball. I was just so disappointed, my emotions got the best of me” Michael Clarke, the Australian batsman out for 80 off the last ball of the fourth day of the Adelaide Test, demonstrates the spirit of cricket via his Twitter feed @MClarke23

“Eric Clapton” Sepp Blatter, allegedly, when asked who is his favourite Qatar player.