Rob Steen offers his pick of the profound, profain and the plainly pitiful 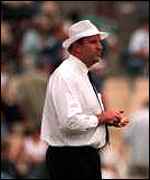 A Pandora’s Box diabolically opened by some London tabloids, which had the potential of exacerbating the tangled Oval cheating row, has been laid to rest with the England and Wales Cricket Board yesterday denying mischievous reports in a section of England’s yellow press – Khalid A-H Ansari, London correspondent of Indian newspaper Mid-day on The Sun‘s ‘exclusive’ about Duncan Fletcher urging match referee Mike Procter to keep an eye on those allegedly naughty Pakistanis. Allegedly.

“Here, awkwardly for television, lay a story with, at its centre, the absence of television pictures” – Giles Smith, The Times, on the Hair Affair “As futility goes, surely nothing beats such an exercise.

Who is the greatest athlete of all time: Tiger Woods or Muhammad Ali? Babe Ruth or Stanley Matthews? Steve Redgrave or Shergar? Rod Laver or Franz Klammer? You might as well ask what is the most useful item on the shelves of a Tesco supermarket: McVitie’s chocolate digestives or Daz washing power?”

Donegan’s full article is here (may require registration). And if you really must, the article that prompted the poll in question is here.

Media “guru” (ie he has a weekly navel-gazing column in one of the broadsheets) Stefano Hatfield is working on nice Rupert Murdoch’s thelondonpaper (sic), a free paper which is to launch on September 4. According to the UK Press Gazette, Hatfield says that there are still a couple of vacancies:

“Talent in London is amazing, but I can’t be doing with miserable old git journalists.”

Rob Steen is a freelance sports writer of 20 years’ standing who is a senior lecturer on the BA Sport Journalism course at the University of Brighton. Read his Questionnaire here.
And post your own choice quotes of the week in the Comment box below