Maria Sharapova, David Beckham, Viv Richards, Lewis Hamilton and Henry Cecil all feature in this week’s pick of the sports quotes, together with the London 2012 Olympics logo. Post your favourite quote from the past seven days in the Comment box at the bottom of this article 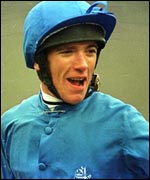 â€œGet the fucking bubbly open!â€ – jockey Frankie Dettori, left, after Authorized, his 15th ride in the Derby, delivered him with his first win in the race

“I told him to ride it like he owned it. Perfect ride, perfect race, perfect horse” – winning trainer Peter Chapple-Hyam

â€œI had to pinch myself passing the post. It had all been so easy. I had expected a dogfight but it was as smooth as an oil paintingâ€ â€” Dettori

“I will be there at Euro 2008. I believe I can carry on for a long time” – David Beckham after laying on two goals in England’s 3-0 win in Estonia on Wednesday

“We have five games left and four of them are at Wembley. It’s in our hands – if we win our games we’ll qualify” – Steve McClaren, England football coach, showing an uncanny grasp of arithmetic

honest I think I’d still go out there. You don’t just fight for the money, you have to have the heart and the desire. I’m always in fantastic shape when I get in the ring, so I think that proves I have the ambition and the heart. And I love being a champion – the best feeling of all is being the world champion” – Joe Calzaghe, the SJA’s Sportsman of the Year, talks about his motivation for boxing

“It was revealed that Lewis Hamilton was driving in Monaco with diamonds embedded in his helmet. Christ, that’s gotta hurt” – Derek McGovern‘s column in the Daily Mirror

“We don’t do bland” – Lord Coe, chairman of London 2012, at the launch of the new Olympic brand

“Apparently, they don’t do ‘cheap’, either” – disgruntled Londoner on the Â£400,000 paid to agency Wolff Olins for the branding exercise which attracted international ridicule and even triggered epileptic fits

“It’s abysmal and so disappointing. It looks like the fragments of a plate smashed on the floor of a Greek restaurant. We’re meant to be one of the most creative design countries in the world and we’ve achieved something which is shameful” – Marcel Knobil, chairman of the Brand Council

“The emblem is flexible and will evolve over the next five years” – London 2012 spokesman, suggesting an early start in Olympic back-pedalling events

“I expect international players to put their bodies on the line for the whole 80 minutes. You can’t play for 50 minutes and expect to win against South Africa” – England rugby coach Brian Ashton after seeing his injury- and illness-ravaged shadow squad concede 50 points for the second week running

“As you get older, you keep learning. There’s the constant tinkering, too, good pitches, good weather, a bit of luck” – former England batsman Mark Ramprakash explains his enduring ability to score against county attacks after scoring the 92nd first-class century of his career, aged 38

â€œThe fans were amazing. I didnâ€™t know if I would ever get this moment again and I am just so happy to have been part of an historic nightâ€ â€” Beckham, cheered as he entered and as he left the pitch at Wembley for the Brazil game

“His balls are fantastic” – has England captain John Terry been talking to Posh Spice?

â€œIt is lovely to be back. Itâ€™s a funny feeling after all these years and I really appreciate the kindness of the publicâ€ â€” Henry Cecil, trainer of Oaks winner Light Shaft, his first big win for almost seven years

“Some people say that to win without danger is to triumph without glory” –Sepp Blatter, 71, president of the world football body, Fifa, after his latest unopposed re-election

“Disraeli once said there were three kinds of lies: lies, damned lies and statistics. We have learned from Fifa that there are more. We have learned about the six degrees of prevarication: white lies, commercial lies, bluffs, pure lies, straight untruths and perjury” – New York lawyer Martin Hyman after Mastercard’s court win against Fifa 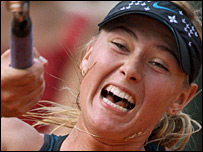 “It’s pretty hard being a tennis player and Mother Theresa” – Maria Sharapova, left, after being booed by the Parisian fans after her fourth-round win at the French Open

“I hope playing in America for LA Galaxy will not have any adverse effect on my chances of playing for England. Iâ€™ll fly the world to play for my country” – Beckham

“Games are usually Saturday. Luckily, this is on a Friday, so the missus has been understanding. If we’d been playing on the actual day, I might have had to postpone it. Don’t tell the missus that!” – Nicky Shorey, who made his England debut against Brazil on Friday, got married on Saturday and was back with the England squad on Monday

“I was fielding at short leg when Close was playing for England in 1976 at the age of 46. Close got hit in the chest by Wayne Daniel and sank to the floor. OK, I was playing for my country, but this was my skipper on the ground and in pain. So I went up to him. ‘Are you OK, skipper?’

“Closey eventually gathered himself together and bellowed, ‘Fuck off’. What a man” – Viv Richards, the former West Indies captain, talks to Vic Marks in The Observer about his first captain in English county cricket, Brian Close