A week’s action in sport and journalism through the words of Shoaib Akhtar, Geoffrey Boycott, David Graveney, 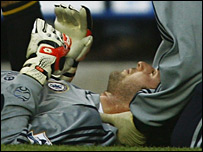 “To be alive Petr was lucky” – Jose Mourinho, the Chelsea manager, on the challenge by Reading striker Stephen Hunt which hospitalised his goalkeeper, Petr Cech (pictured), requiring surgery on a fractured skull

“I know the English league is more physical than most, but here you do not respect your goalkeepers. Having played in other countries, I know that referees offer more protection to keepers” – Arsenal’s Jens Lehmann on the vulnerability of goalkeepers

“They have a few more

injury problems than we have and their new ball bowler, Glenn McGrath, is 36 and hasn’t been fit since the Lord’s Test 16 months ago” – David Graveney, England’s chairman of selectors (pictured to the right of ECB’s David Collier and SJA chairman Barry Newcombe), tells his SJA lunch on Monday that Australia have problems, too, going into the Ashes series

“It’s proving to be a waste of my time and his money. I’m used to making an impact from central midfield and I can’t do that from the substitutes bench. I now know how Theo Walcott must have felt during the World Cup” – PR “guru” Max Clifford explains his split from England football manager Steve McClaren

“If we don’t convince them that there is no case to answer, the top and the bottom of it is that I’m gone. If we had to wait for a court case in September 2007 or so, that would just be too long. We thought it would be all over by now” – jockey Kieren Fallon, on his ban from riding in England

Josh Levin, on Slate magazine, on the impact of YouTube on sport:

Of course, fandom isn’t all dunks and touchdowns. Just as YouTube enabled sports junkies to revel in their team’s greatest moments, it has also given us powerful new tools for wallowing in sports-borne sorrow. In the dark moments after a tough loss, there’s nothing more cathartic than heading to YouTube to confirm what you already know in your heart: It was the ref’s fault.

“I’ve played against England six times and won four of those matches.

That’s not surprising to me because, between the walls of our dressing room, we always expect to beat England. But the English public and their team have a hard time believing that. They still assume they should come out on top every time because, apparently, the natural order in rugby is that England are the greatest. It’s probably down to the way they’ve been brought up” – Munster’s Ronan O’Gara, pictured right, ahead of the Heineken Cup clash with Leicester

“We have asked both players about it. They have both been treated for injuries in Pakistan for which they had injections that may have contained the substance” – Pakistan cricket coach Bob Woolmer on Akhtar and Mohammad Asif’s positive tests for anabolic steroid nandrolone

“In the end, it’s down to me, it’s my responsibility, but they have acknowledged that the system failed, because they’ve changed it. They are listening to us, it’s just too late for me” – Tim Don, who won the triathlon world title after missing a third out-of-competition drugs test within 18 months

Sue Mott in the Daily Telegraph:

“It’s not human rights we’re protecting here, it is sport. Athletes sign up to the rules of their sport, including drug tests, just as airline travellers succumb to searches. The idea is to try to run a clean sport and avoid your plane blowing up over the Atlantic. The inconvenience is outweighed by the benefits”

Better off as midwives?

“It’s a volatile industry, newspapers. You would be better off as midwives” – what Daily Express human resources executive Hazel Messenger is alleged to have said to female trainees as she made of the £17,000 per year youngsters redundant just one month into their two-year programme

“Everyone in the media industry is busy facing up to the challenges that the internet is throwing at us. I am often asked if the rise of online news will diminish the role of journalists and journalism. My answer is a clear no” – Lord Rothermere at the Press Ball

“When you’re the laughing stock of major league baseball and you’re the butt of David Letterman’s every joke, this probably feels pretty damn good right now” – Todd Jones after Detroit Tigers won heir way through to their first World Series since 1984. In 2003, the same club was dubbed “Terrible Tigers” after losing 119 games in a season

“Sky do an incredible job in dramatising the whole of English rugby, but the way they hype these English guys is unbelievable. I’ve toured with some of the players they’re now saying are the best in England – and it just doesn’t make sense. We all talk about the English players so this is the general opinion in Irish dressing-rooms. Some of the people they are trying to put on a pedestal just don’t deserve to be there.”

“My match against Ancic was the best I played for two years. I’ve had two good tournaments and a good win tonight, but I want to do more” – Tim Henman relishing his return to top form

“There is a very unpleasant smell about this appointment – he is a Labour donor, it is alleged he is a lifelong friend of Richard Caborn, has loaned his flat in Mallorca to John Prescott on two occasions and has instructed Cherie Blair to represent him over a planning case. The appointment was sneaked out” – Hugh Robertson, the shadow sports minister, on the appointment of Midlands businessman Derek Mapp to the chairmanship of Sport England

Frank Keating, in the Guardian, on a visit to Shrewsbury school, once the home of Neville Cardus and Geoffrey Green, offers hope to all doltish schoolboys:

Not only can the school claim Cardus, first journalist to invest his summer game with a lyrical eloquence and romantic joie de vivre, but it also produced the man who so rhapsodically did the same for soccer. Geoffrey Green, football correspondent of The Times for four decades, arrived at Shrewsbury as a pupil in 1925, nine years after Cardus left. He was a luminary on the sportsfield, but not in the classroom.
In his pomp in the 1960s I had the luck to accompany Green on a return to the school for an Old Salopian match. Immediately, a stooped, senescent Mr Chips instantly recognised him. It was Jimmy Street, his Classics master of fully 40 years earlier: “My dear Green, every morning I read you and every morning I’m totally astonished how you do it – at school you were such a perfect combination of doltish imperfections that you could hardly write your name at the top of an examination paper”