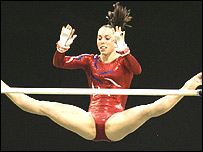 She thus leapt into contention for the SJA Sports Awards on December 13.

Tweddle, the European champion and former Commonwealth champion, had become Britain’s first world medallist a year ago when she won bronze on the same apparatus.

Tweddle will now be among the leading contenders for the Sportswoman of the Year award, along with three-day event world champion Zara Phillips and Nicole Cooke, the winner of the women’s Tour de France.

The Sportswoman of the Year is determined by the votes of SJA members: click here for more details and news of other contenders. Voting is open now.

Click here for a fuller report on Tweddle’s gold.