A week in sport and journalism, through the words of the players and those who cover them. 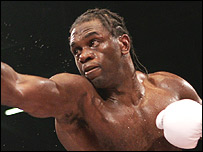 Hugh McIlvanney in the Sunday Times:

This is an era when calling the heavyweight division a desert insults the fecundity of the Sahara. Thus credentials as desperately compromised as big Audleyâ€™s need not disqualify a man from hoping he can be steered through the rubble of his failures towards a life-changing payday and a chance to wear one of the pathetically devalued belts with which the four main sanctioning organisations denote recognition as a global champion

“When a player makes his exit at the Crucible, his press conference often ends with someone 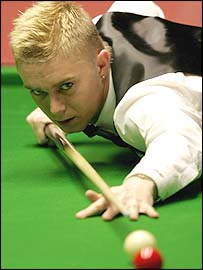 saying ‘See you next season’. But those of us could see how ill he looked could not restrain the thought that for him there might not be a next season” – Clive Everton on the death from cancer, at 27, of three-time Masters snooker champion Paul Hunter (pictured left)

“When I was first introduced to Simon Kelner I thought I was interviewing him as my editor whereas he thought he was interviewing me as his proprietor. Simon’s view of me was that I should put up, pay up and stay in Ireland, which I’ve done” – Tony O’Reilly, owner of The Independent, speaking on the newspaper’s 20th anniversary

“It’s the same old story month after month as newsrooms shrink: 100 or more jobs gone at the BBC, 54 heads on the Telegraph block, redundancy notices flying fast and furious throughout Britain’s regional press. This isn’t a comfortable time to be a journalist, but who (apart from other journalists) cares? The sad answer, alas, is nobody much” – Peter Preston, in The Observer

â€œAn awful lot of revenueâ€ – Annelies van den Belt, new media director at the Telegraph Group, on the Â£1.8 million a year made by the company’s Fantasy Football game online

“The important thing is not to have any fear, because in the past certain sides have wasted so much time and energy worrying about New Zealand that half the game has gone by before they’ve realised they are eminently beatable” – Former England rugby captain Nigel Melville looks ahead to England’s autumn international against the All Blacks

“Some players might squirm at being bollocked, but I don’t think there’s anything better than hearing the manager being honest in front of the lads or even to your face, by yourself. So you know where you went wrong and what you’ve got to do to improve it” – Rio Ferdinand on the approach of the England manager, Steve McClaren

“I’m a journalist, I don’t do honesty” – the Sunday Times‘s Paul Kimmage fends off Rio Ferdinand’s enquiry about his opinion of his book

“Many clubs in England and Scotland came in. Agents have been calling my phone but I was only looking for one answer and that was from the Almighty God. I’m back here because God wants me to be here. Simple” – Marvin Andrews on his move from Rangers to Raith Rovers, a transfer apparently partly brokered by local MP, Gordon Brown

“I’m more interested in the art from years ago, it tells a story of how it was back then and it’s quite interesting. I like modern art as well, I think it’s nice on the eye, but for me personally I’d prefer to look at paintings from years back” – Steven Gerrard, 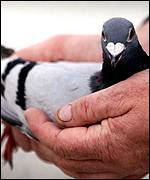 art critic, on the offering in the galleries of Liverpool, Europe’s “2008 city of culture”

“Before mobile phones started, hardly any pigeons got lost, but these days there’s something stopping them orientating properly. There’s a definite trend. And no one knows how these radio waves affect humans” – champion fancier Chris Gordon

Denis Walsh, in the Sunday Times, on snooker world No1, Ken Doherty:

He tells a story about his cue. They met about 25 years ago. Somebody had left it behind on the pool rack. Most pool cues were made of plain maple but this was made of grained ash. He played a few games and fell in love with it. He asked the manager of the club if he could keep the cue and the manager said that it was his for a fiver.

He went home and pleaded with his mother for funding. She gave him a five pound note and before he returned to Jason’s he changed it into coins. He offered the manager two pounds and the deal was done. Doherty was 12. The signs were promising. If you couldn’t hustle, you had no business in this game

“There are so many different facets to it now and so many people being stitched-up and burnt. The sports journalists say, ‘Oh, we’re not part of that bit of the paper’, but it’s their paper, so you think: ‘Fuck you’ “ – Rio Ferdinand, left, on footballers’ rationale for dealing with the Press

“I’m embarrassed” – Steve Staunton, Ireland’s manager, after seeing his side lose 5-2 against Cyprus

“They looked a lot better than they are and we looked a lot worse” – a clearly confused John Toshack, the Wales manager, after his side’s 5-1 drubbing by Slovakia, his country’s worst home defeat since 1908

“The Ukraine away on Wednesday? Nae problem. They’ll be feart tae turn up. – I remember being in the Wembley press box in 1967 after Scotland had beaten Alf Ramsey’s world champions 3-2, and hearing an Edinburgh sportswriter declare: – Today the World Cup is meaningless.”

The Scots, of course, have yet to progress beyond the first stage of the global tournament. But on a morning such as this, who wants to be bothered with boring details like that?