The week’s sport, in quotes. This week, how Hunter Davies is helping out a penurous FA,

“I am not saying that is going to get us Beckham but if it could, I would love it” – Sam Allardyce, talks up another possible transfer

Alan Hubbard, writing in the Independent on Sunday, about the SJA Sports Awards:

“Dare we suggest that the journos got it right, too, when correcting the unfathomable snubbing by BBC viewers of the Sky-televised Ryder Cup success by naming Woosie’s men as team of the year”

“I’m sure Dung Daphnes all over the Home Counties huzzahed when Zara Phillips won the BBC’s Best in Show… but what’s the legacy of her award? Are we supposed to expect a big boom in primary school dressage now?” – letter writer to The Observer

“This is no witch hunt. This is no whitewash… The game, in relation to the majority of what we have seen, is clean but the accounting processes and monitoring of the clubs is in a mess” – Lord Stevens, at the announcement of his inquiry into transfer corruption

“So far, medical science has not come up with a cure for stupidity, so governments still lobby for the right to host the Olympics” – Dylan Jones, editor of GQ, realises London won the bid to stage the 2012 Games 17 months ago and so manages to fill his Mail on Sunday column

“Darts is not sport â€“ it’s a recreational activity. Sport implies athleticism. Darts is therapy for those who can walk. When Bullseye first came out on TV, a generation ago, there was none of this pretence. Darts players were big, with a beer belly to die for. If they were to travel by plane, they’d

be classed as cargo” – Jim Bowen, former presenter of Bullseye, the television gameshow, resolves the question of darts’ status once and for all

â€œI am not surprised we regained the Ashes this quickly when you consider the cricket we have played in these last three games. Weâ€™ve deserved to win in threeâ€ â€” Australian captain Ricky Ponting

â€œI believe I still have something to offer this team. I speak to the players and I still have their confidence and respect, which is very importantâ€ â€” Englandâ€™s under-fire cricket coach Duncan Fletcher

“After seeing it again on the video, [referee] Mr Halsey did wonderful work and both decisions for penalties were correct. Did Andy Johnson try to avoid a collision with my goalkeeper? It seems now the answer to that is yes so Everton, his manager and he deserve my apologies” – Jose Mourinho

â€œI did not push anyone nor did I use any bad language. I donâ€™t know the bad language of this countryâ€ â€” Arsenal’s Arsene Wenger, adding linguistic incomprehension to his usual problems in seeing his side’s fouls

“We all want to play great music all the time, but if that is not possible, you have to hit as many right notes as you can.” Mourinho

James Lawton, in The Independent, on Chelsea’s 3-2 comeback win at Everton:

“You don’t have to love Chelsea to marvel at their power to destroy. Twice, Everton lifted themselves to levels of performance that had been elusive for most of the season, taking the lead once with an Arteta penalty and then again through Yobo’s header. Three times, Chelsea produced goals of such atavistic power they created an awesome sense that they simply could not be beaten. A free-kick by Michael Ballack and the sweetest of drives by Frank Lampard kept them level, but it was the winner from Didier Drogba, a thunderous 35-yard volley, that will swirl in the psyche of title-rivals Manchester United”

“I’ve had enough” – Ronnie O’Sullivan to Stephen Hendry, after conceding the UK Championship quarter-final to his opponent with a possible 12 frames left to play

â€œI handed it to him on a plate. And he made the most of it. I picked today 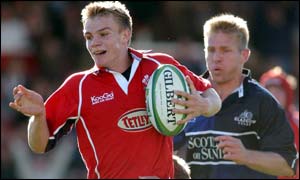 â€œMy family were watching on TV and my grandfather was jumping around so much heâ€™s now got bad kneesâ€ â€” Llanelli and Wales scrum-half Dwayne Peel, right, after his club’s stunning 41-34 comeback win

“England did nothing in the World Cup, so why are they bringing books out? ‘We got beat in the quarter-finals, we played like shit, here’s my book’. Who wants to read that? I don’t” – Manchester City midfielder Joey Barton makes his possible selection for England all the more intriguing

Hunter Davies, in the New Statesman:

“As for the FA’s library, their minutes and rule books go back to the beginning, all fascinating. They have 2,000 other football books, including a run of Rothmans yearbooks – but they don’t have a number one. David [Barber, the FA librarian] doesn’t have a budget to buy one.
“I suppose having to pay Sven a reported Â£13,000 a day for doing nothing means they have to count the pennies. So next week I am donating to the FA a Rothmans No 1 from 1970, which I happen to have spare. I do like to help.”