“I have no desire to play golf right now. I just want to make sure my boys are OK this Chrismas, that seems much more important than golf” – Ryder Cup golfer Darren Clarke adds perspective in an interview with Donald McRae after a tumultuous year

“I find it all so boring, it’s unbelievable. Of course we’ll have a drink. I might have found it harder if we’d lost” – Roy Keane, right, on his public meeting with his former Ireland manager, Mick McCarthy, as managers of Sunderland and Wolves respectively

“Maybe the story over the weekend will be of two very proud and public characters who have shown an example to some other people. It’s done, it’s finished” – Wolves manager McCarthy

“Andy Robinson is fond of telling us that Test matches are all about small margins, so why then does he and his fellow selectors deny their players the refinement that is honed from playing repeatedly in the same numbered shirt?” – Paul Ackford in the Sunday Telegraph:

Boxer Scott Harrison, pictured, on his 40-day spell in a Spanish gaol:

“It was difficult being in prison but I trained three times a day, and ate mainly fish and rice. It was like the United 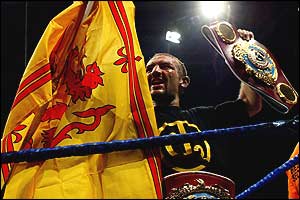 Nations in there, with a lot of the boys really helpful. Some days I’d have seven pieces of fruit because others give me theirs. One guy made a skipping rope for me and another some weights. They took a broom handle, cut a tin can in half and filled the two halves with cement to make dumb bells. I did push-ups outside and loads of circuits in the quad. There were those saying I went to prison and came out with a suntan. But it was because I was allowed in the prison yard to train”

The trouble with blogs

“Some writers, on papers and magazines that can ill afford downtime, will happily spend 90 smiley minutes a day churning out self-indulgent blather that will give you 50 page impressions. No return on investment there, but better than a smack in the gob if it puts you in the blogosphere?” – Richard Burton, former editor of Telegraph.co.uk, questioning the role of the blog on newspaper websites after it was disclosed that in September, his former website’s blogs generated less than 360,000 page views (the BBC’s website generates more than 5.5 million page impressions per month)

“It is, I think… individual blogs, which proliferate at the Telegraph and The Times, that present the biggest problem. Blogs don’t work if they are an ego trip

or if the person doing them does not really understand the medium” – Andrew Grant-Adamson, blogosphere expert and journalism lecturer at Westminster University

Blue is the colour?

“I feel a certain amount of regret for him but then I’m sure a lot of people will say it’s his own fault. I’d support him if ever I could – I quite like the fella, but I don’t know how he gets himself into these situations” – Newmarket racehorse trainer David Elsworth on the news that jockey Kieren Fallon, pictured, has had another scrape with authority, this time a six-month ban in France after a postive drug test

“Who does he play for?” Gary McAllister, in Sky pundit mode, when told that the Chelsea squad had been watching Borat

“This season we were quick out of the blocks and we have a chance to go six points clear which will mean they’re chasing us rather than us chasing them. Who’s to say how they would react to that?â€ – Sir Alex Ferguson, the Manchester United manager, before his side’s “showdown” at Old Trafford with Chelsea

“If I was in their place I would be very disappointed. United lost a big, big chance to open up six-point lead. It’s a better result for us than them” – Jose Mourinho, the Chelsea manager, after the game

“For all his talk of world domination the former sportswear salesman from Stalybridge is little more than a highly-paid errand-boy, sent on missions by a mysterious, easily bored Russian, for the benefit of a manager who labours under the misapprehension that he is Count Bismarck, and the Premiership represents a map of Europe in 1870” – Michael Henderson, in the Daily Telegraph, on Chelsea chief exec Peter Kenyon

“Every player dives, not just me. If you see Rooney, how many times does he dive to try and get a penalty? It’s just because it’s me that people talk about it. Sometimes when I need to dive to get a penalty it’s because the best footballer is a footballer who is very clever” – the ever-popular Bolton striker El Hadji Diouf

“I have no doubt he will finish as our best batsman after Bradman” – former Australian captain Steve Waugh on current skipper Ricky Ponting, who equalled Waugh’s 32 Test centuries in the first innings of the Brisbane Test. Bradman completed his Test career with a batting average of 99.9

“We’re not going to go home, but we’re not happy about the way we’ve been treated. We have always been self-policing and love coming to Australia. But when the trumpeter was asked to leave we were staggered” – Barmy Army co-founder Dave Peacock, after trumpeter Bill Cooper, who plays for the London Philharmonic Orchestra, was ejected from the Gabba

“Yes, it is racist but I can’t do anything about it. I can’t turn round and play into their hands” – England pace bowler Sajid Mahmood on abuse he received from the crowd at Brisbane during the first Ashes Test

“The sledging was non-stop and you had to be so mentally strong to cope with the pressure out in the middle” – the recollections of an Ashes series of 30 years ago by the former Surrey and England all-rounder Graham Roope, who died this week 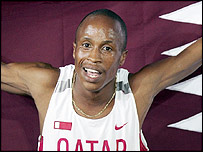 “The recruitment of athletes from other countries is over. Don’t forget that the Crown Prince, who is president of the Qatari Olympic Committee, is also a member of the IOC. He has to maintain his personal situation and he cannot appear like a gangster” – Renato Canova, the Italian coach who has overseen around 30 Kenyan runners switch nationality to Qatar, including Saif Saeed Shaheen, pictured right, speaking ahead of the Asian Games in Doha

“It is an impressive venue, for sure, but we have some concerns. We are worried about the head height above the divers now that the roof is so much smaller. We think the seating capacity is not enough – smaller than Sydney in 2000 and Beijing in 2008” – Cornel Marculescu, executive director of Fina, the world swimming governing body, on the rescoped design for the 2012 Olympics aquatics centre

Andrew Rawnsley, in The Observer:

It was both predictable and predicted that the Olympics would be a black hole sucking money out of taxpayers and lottery funds and away from good causes. Try justifying these Games to disabled groups whose lottery funding is being cut. Cost overruns are as integral to the tradition of the modern Olympiad as are cheating and corruption. The Games are a serial financial killer.

Jeff Powell, in the Daily Mail:

“The only organisation who have consistently been beating the drum for sport have been the BOA. Out of the four organisations who sit on the Olympic board, who are responsible for the entire 2012 project, only the BOA, in the person of their chairman, Colin Moynihan, have the interests of sport alone as their raison d’etre” – former sports minister Kate Hoey

Time is running out for you to vote for your choice of Sportsman, Sportswoman and Team of the Year.
Act now: click here to cast your vote