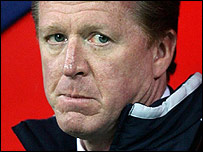 A brief trawl through the back pages on the debacle where England failed to manage a draw against Croatia in order to qualify for Euro 2008. Please add your favourite quotes on this topic in the Comments box below

“Useless, pathetic, insipid, spineless, desperate, rubbish and all those other words we are not allowed to print in the nationâ€™s favourite newspaper” – Shaun Custis, The Sun

“There can be no excuses. If you lose you don’t deserve to make any excuses. We realise that if we don’t perform we don’t deserve to go through and we know what we are going to get now. It won’t be for a week or two, it will be longer” – David Beckham

Paul Hayward, Daily Mail
“Under his umbrella, McClaren reeled and turned to his bench for clarification, sympathy, anything. Let’s get the brolly issue out of the way now. Nobody in this torture chamber could recall a manager in professional football patrolling the touchline and shouting instructions while auditioning for Singing in the Rain…. We’ve seen managers drenched and lashed by hail. We’ve seen leaders try to be with their men through snow and biting winds. But we’ve never seen a head coach â€”certainly not in England â€” worry about getting his hair wet at such an important game”

â€œGeoffrey, I think we need to have that meetingâ€ – Brian Barwick, FA chief executive, to Geoff Thompson, the FA chairman, sitting in the posh seats at Wembley on Wednesday night

“Outclassed, outfought and outthought, England are out of Euro 2008 and Steve McClaren will surely be out of work after the FA board meet this morning, deservedly so. Russia qualify behind the outstanding Croatians and England have only themselves, and their hapless manager, to blame” – Henry Winter, Daily Telegraph

“I’m not stepping down. I have no intention of doing that. Ultimately I take responsibility and

I accept that. It was my job to get us qualified and I failed to do that. I pick the team and said over the 12 games I would be judged and I will be. I am not looking to the future, I am thinking about this game, what could have been, what wasn’t, and really how we get over this” – Steve McClaren, with a tenuous grasp of the untenable

“Steve McClaren’s reign was brief but the ghastliness of it will stay with him forever… McClaren went down as the creator of this fiasco rather than its victim as a mediocre Russia beat them to a Euro 2008 berth” – Kevin McCarra, in The Guardian

Slaven Bilic, Croatia manager
“To go two up was almost too easy. I read that people said no Croatian player would make the England team. Wake up, seriously. There shouldn’t be a scapegoat, like there was with Paul Robinson in Zagreb. We were just the better team out there”

“So now the new Wembley has an occasion to remember as ugly as the one on which England said goodbye to its predecessor” – Richard Williams, The Guardian