Changes at The Sun, football second chances and hopes dashed all feature in this week’s quotes from Rebekah Wade, Steve McClaren, plus an interesting take on the

“Organisers of the 2008 Olympics in Beijing have published a list of ‘prohibited objects’ in the Olympic village where athletes will stay. To the surprise of many, Bibles are among the objects that will not be allowed” – Italian news agency report

“Why don’t they invest in football in America? You don’t think they came here for the football. They don’t know what football is… They just want to make money” – Michel Platini, Uefa president, warns of the growing influence of American owners in English football

to pay tribute to Israel for the professional way they went about the job. They showed what a proud nation they are and deserve a lot of praise for their efforts” – Steve McClaren after Israel’s 2-1 win over Russia handed England a European championship lifeline

on the demise of the sub-editor’s craft

“So it turned out that they were right, those who said it would end in tears for Scotland. There were tears alright, and it doesn’t come much closer to the end than being knocked out of a tournament by conceding a goal in time added on to the final qualifying match” – Michael Grant, in the Sunday Herald, on another brave, but ultimately failed, Scottish qualifying campaign

Jamie Jackson, in The Observer, on the split between Andy Murray and coach Brad Gilbert
Chief executive Roger Draper has made the Lawn Tennis Association and himself look ridiculous, has wasted a fortune of the game’s money, and has been ‘held to ransom’ by Andy Murray’s agent, it was claimed by members of the British tennis establishment following the costly split between Murray and his coach, Brad Gilbert, last week 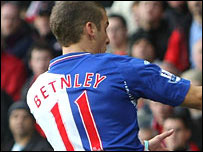 “I was in the doping centre and somebody came in and told me I was in the squad. At first, I thought they were taking the piss out of me” – Italy striker Raffaelle Palladino

Gerald Davies at the funeral of Ray Gravell

â€œI shall not say that we shall not see his like again, for I hope we do. There could be no poorer way of honouring the memory of Gravâ€™s than for us to assume that his spirit has perished, never more to arise. Should not his generosity, his kind and gentle heart remain a standard by which we measure ourselves? Should not this be the inheritance that Grav bequeaths to us all?â€

“There has to be a dose of reality… there must be a chairman responsible for the club and a manager responsible for the team. This sounds a bit Fantasy League, with fans giving a thumbs up or down like in the Roman coloseum” – Gordon Taylor, chief executive of the Professional Footballers’ Association on the fans’ takeeover of Ebbsfleet United