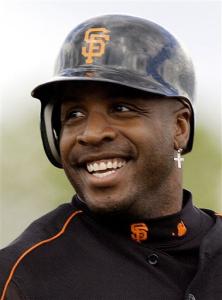 “Some cheered. At least as many booed. But in baseball there is no arguing with statistics. Barry Lamar Bonds, the most divisive figure in American sport, has hit his 755th home run, to own a share of American sport’s most revered and celebrated record” – Rupert Cornwell, writing in The Independent, on a controversial piece of record-setting. Bonds broke Hank Aaron’s record last night

“It’s akin to what Thatcher did to society. Greed replaces ethics” – SJA award-winning columnist Doug Gillon, in The Herald, on UK Athletics’ policies on selection and funding of athletes

“In an ideal world, I’d love to field our strongest side, but to be honest, I still don’t know what our strongest

XV is” – England coach Brian Ashton. The Rugby World Cup is a month away

“I am only 25 so perhaps I still have time to feature in the next World Cup” – Gavin Henson, the Wales outside half who will now miss his second World Cup through injury

“There is regular monitoring in France. But what is happening in New Zealand or in England? You cannot be sure of anything” – France coach Bernard Laporte raises questions about drug testing in international rugby

“I read what he wrote, and I saw all of these major holes, all of these impossible things. All of these other parts of the book I would correct, but I told myself, ‘If I correct this, there are going to be people out there that say, “Oh, look how accurate this is”,’ right?” – OJ Simpson on his apparently ghostwritten book, If I Did It, which explored the former American football star’s role in one of the world’s most notorious, and unsolved, murders

“Don’t ever fucking do that to me again!” – Lewis Hamilton puts the F into F1 on his in-car radio during practice for Sunday’s Hungarian Grand Prix after he was blocked in the pit lane by team mate Fernando Alonso

“Don’t ever fucking speak to me like that again!” – Ron Dennis, Hamilton’s McLaren team boss, in response

“Go fucking swivel!” – Hamilton. Hamilton went on to win the race on Sunday and extend his lead in the world championship

“Players should be allowed to go out there and play the game without being worried that everything they actually say is going to be broadcast” – England cricket coach Peter Moores, worried that on-field sledging might be heard more widely

“Patrick was saying that he wanted to break the England defender’s legs. At that moment, Roy arrived. He said: ‘Pick on someone your own size.’ Patrick said: ‘I’ll break your legs as well.’ Roy replied: ‘If you were that good, you’d be playing for Real Madrid’.” – Vieira and Keane are “at it” in the Daily Mail‘s first extract from former referee Graham Poll‘s book (not sub-titled How to make friends and influence people)

“It’s a major issue and it could be a long-term worry. But it’s going to be difficult to change something that he has been used to doing for many years” – Allan Donald on Freddie Flintoffâ€™s troublesome bowling action

“He is in the Premiership and he is good looking and fit and we had a thing. It all had to be kept quiet” – Big Brother evictee Charley labours under the misapprehension that anyone is interested in her sex life. Or believes her

“Hundreds of children aged 11 to 16 are sprinting 60 metres on tarmac across the playground, watched over by the smiling figure of Linford Christie, the 1992 Olympic gold medallist. Christie is also a man with a tattered reputation on doping that includes at least two drug test failures and one instance where he supplied a pick-me-up to a young team-mate who tested positive as a consequence. Christie’s company, Nuff Respect, is staging the children’s sprints event, thanks to a three-year deal with government quango Sport England, and Â£275,000 of public money. Now what message about drugs in sport does that send to the kids?” – part of a Sunday Herald special on doping in sport

“I have always played fairly by the rules, unlike a lot of my rivals. I will not miss being robbed of higher places and financial rewards 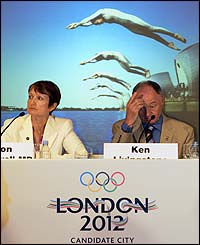 Marina Hyde launches an all-out attack on London Mayor Ken Livingstone over his statements about the Tour de France and its doping past, and present:
“It would be nice to think that self-interest might encourage him to lobby tirelessly for decisive changes to our doping legislation, without which the reputation of the London Olympics, and by extension that of the man who so blithely brought them here, could be besmirched. But a sneaking suspicion says that as long as there’s a podium for Ken to swank about on in five years’ time, he will be too blinded by stardust to understand why it’s important to give a toss”

“If old flat nose wins it he will have every right to be called the best fighter in the sport” – Ray Hatton, father and manager to world champion Ricky, on his son’s December date with Floyd Mayweather

“When you see the course on telly, you get certain ideas of how you think it’s going to be and it was nothing like it. It’s smaller, and everything ties together on and off the course. It’s just a great atmosphere in which to play a championship” – Laura Davies, before the Ricoh British Women’s Open was staged at St Andrews for the first time