With big wins for Joe Calzaghe, pictured, Frankie Gavin, Justin Rose and Paula Radcliffe, it was a great weekend for British sport. It was 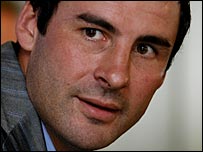 “I was struggling at the end, I was a bit tired. But I felt I controlled the fight and was proud of my performance” – Joe Calzaghe, the SJA’s 2006 Sportsman of the Year, on his points victory over Mikkel Kessler

“Good luck to John Terry, but I think it is obscene to be on Â£150,000 per week. People in the street cannot understand salaries like that” – minister for sport Gerry Sutcliffe

“I’ve read that we are favourites, but I think that even when you are favourites it is best to regard yourself as the underdog” – former tipster, now Scotland’s first minister Alex Salmond, ahead of Friday’s vote to decide whether Glasgow will stage the 2014 Commonwealth Games

“When she came alongside me I thought this was not happening to me again. I’ve had years and years of her outsprinting me on the track and I thought she’s not going to do it in a marathon” – Paula Radcliffe describes her emotions in the final stages of the New York City Marathon head-to-head with Ethiopia’s Gete Wami

“I have no desire to spend the next seven years fighting doping officials. I’m frustrated and angry, and accusations such as these

don’t provide me with the motivation to continue” – Martina Hingis, left, explains why

she has decided to retire after failing a drugs test

Simon Barnes in The Times
The story of the England cricket captain who turned up to fielding practice too drunk to throw the ball will go down in the legends of the game, while the idea that the head coach of the England rugby union team didnâ€™t have a clue what he was doing throws a fascinating light on his teamâ€™s progress to the World Cup final. But it is strange how much of the debate has not been about the drunkenness of Andrew Flintoff or the alleged incompetence of Brian Ashton. Rather, people have preferred to talk about whether or not these revelations should have been made.

Self-deluding nonsense. It reminds me of the way the News of the World used to fill its pages with salacious material, by gathering it under a headline such as: â€œStamp Out This Filth! (More on pages 2, 3, 4, 5, etc) . . .â€

Hugh McIlvanney, in The Sunday Times
Are we in danger of waking up one morning soon to discover that the national sport of this country is lobbying? That certainly seems to be the kind of competition in which we have the best chance of capturing the big prizes these days. After the rejoicing occasioned by Londonâ€™s success in the contest for the right to host the Olympic Games of 2012, there was no surprise in finding last week that we were expected to be stirred to the marrow by the news that England is seen as the early favourite to gain Fifaâ€™s approval as the location of the 2018 World Cup finals. The very possibility evoked enough anticipatory celebration to leave me wondering if it is antiquated heresy to think that in any league table of thrills and satisfactions staging the World Cup ranks rather lower than winning it.

â€œReuters regrets this course of action. However, press freedom and protecting the news interests and coverage rights of our global clients is of key importanceâ€ – Monique Villa, managing director of media at Reuters, announcing that her agency is to boycott coverage of the Australia v Sri Lanka Test cricket series in a dispute with Cricket Australia over photography rights

Investigative journalist Andrew Jennings, in his speech to the Play The Game international conference staged in Iceland, on corruption in Fifa, the world football body
“Every week you can hear and read the ebullient President Blatter gabbing on about ethics and his concerns for what he calls the good of the game. With his spindoctors working overtime and the gullibility of many of the sports news reporters, he projects this caring image. And heâ€™s determined to stamp out corruption. So he says – and this nonsense gets published uncritically”