Boris Johnson and Boris Karloff make their debuts in our sports quotes this week, as Oligarchs’ ownership of Premier League football clubs continues to be an issue. As well as Arsenal and Chelsea, there 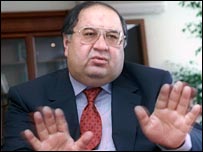 is the latest twist in the Formula 1 spying scandal, Jonny Wilkinson and the rugby World Cup, plus Tim Henman’s Wimbledon farewell

â€œI want to be in a position that will allow me a blocking stake. I will then wait for it to go up in valueâ€ – Alisher Usmanov, pictured right, the latest Soviet bloc oligarch in English football, speaking on Ekho Moskvy radio station about his stake in Arsenal

“It is unbelievable that a website can be wiped out on the say-so of some tycoon. This is London, not Uzbekistan” – Boris Johnson after legal complaints by Usmanov’s lawyers about another, human rights site forced the Tory MP’s website hosting server to shut down temporarily

â€œI am totally relaxed because I just want to work in the way I work. If that is not possible, I will have to assess

the situation. But, at the moment, I work as I want to workâ€ – Arsene Wenger on the lack of interference in his team management from Arsenal’s ownership

“Given Chelsea’s attempted hara-kiri last week following the Jose Mourinho affair, it is difficult to see where the challenge, at least in this country, is to come for the Gunners” – Brian Glanville, in the Sunday Times, after witnessing Arsenal beat Derby 5-0

“Bullshit” – Old Etonian Peter Hill-Wood, chairman of Arsenal, responding to claims by claims by London rivals Chelsea that they could dominate world football by 2014

“Nothing surprises me in football, nothing – but this is a bit of a surprise” – Tommy Docherty after the news about Mourinho

“I am not the ‘Special One’. I’m the normal one. But my wife says I am special” – Avram Grant tries to defuse comparisons with his predecessor

“The referee was excellent. He made only three mistakes – the red card, the added time and the penalty” – Avram Grant, after Chelsea lost 2-0 at Manchester United in his first game in charge

“The fans never left Stamford Bridge crying, because we never lost. The day they lose a match at home, they will remember my three years there” – Jose Mourinho. For more Mourinho quotes from Chelski, click here

“Everybody knows the manager likes to rotate and he isn’t going to change his style. Because we’ve drawn a few games, people have started to talk about it again which is silly” – Liverpoolâ€™s Sami Hyypia defends his managerâ€™s baffling handling of Fernando Torres

“All it took was to cut and paste from the Acrobat document on the FIA’s website into a Word document and all the blacking vanished” – investigative journalism at Gazzetta dello Sport uncovering details from the motor racing body, FIA, minutes, including blacked-out confidential sections about the McLaren spying scandal

“It will be huge in India. I will treasure this win for the rest of my life.” Indiaâ€™s winning Twenty20 captain, Mahendra Singh Dhoni

Mick Cleary, in the Telegraph, on England’s stuttering defence of the rugby World Cup:
“The level of security evident around England’s training base near La Baule on the Brittany coast yesterday might suggest that the world champions have something to hide or something to protect. If there is a secret, dynamic game plan in there, then it’s about time they showed it to themselves, never mind the rest of the world”

“A line-out resembling a panicky queue outside a Northern Rock office, and a tactical refinement which appeared to be the product of five minutes in the pub, a single Biro, and the back of a fag packet” – Martin Johnson (but not England’s 2003 World Cup-winning captain), in the Telegraph assesses the holders’ performance in their victory over Samoa

“For those who can’t tell the teams apart, the All Blacks are the ones with the ball” – ITV’s Jim Rosenthal on the New Zealand (wearing grey) v Scotland (pale blue) Rugby World Cup game 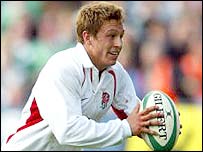 was there, he kicked two drop-goals, and he had a hand or a foot in all four tries. Now he just needs to play. The key thing for any player is to get a run of games to help build confidence. This was his first game in this tournament and it was only his eighth start in an England shirt since the last World Cup. But quality players will overcome those kinds of issues more quickly than others” – Rob Andrew on the performance of Jonny Wilkinson against Samoa

“It’s good to see him back. He’s all class” – Samoa’s coach, Michael Jones, on Wilkinson (above left)

“It’s getting towards the sort of rugby I enjoy watching, let alone coaching. Don’t be too surprised, we might do that again next week” – England coach Brian Ashton

Secret memo from RFU chief Francis Baron to council members, as reported by the Mail‘s Charlie Sale:
“If England’s performances do not improve we should expect a media backlash against the RFU generally, as well as individuals, on a ‘baby and bath water’ approach. We are therefore preparing a media-briefing paper explaining the issues that we have had to deal with in Elite Rugby over the last three years”

“I’m not really ready to race Asafa yet…I want to be fully healthy and focused. I don’t want to race him if he’s on his A game and I’m not.. I’m not going to step up to the plate and race the world record holder when I’m not 100 per cent because right now he’s on fire” – 100m world champion Tyson Gay on his reasons for ducking a race against world record-holder Asafa Powell

“What disappoints me more than anything else is while these people are saying they want to be professional tennis players and want all the trappings that come with that, they aren’t behaving in that way” – Roger Draper, chief executive of the LTA, on the suspension of junior players David Rice and Naomi Broady after they were seen on a website drinking beer and eating pizza

“Sure I’ve had disappointments. But I look back on my career and I don’t have any qualms about what I’ve put in, how committed I’ve been and how hard I’ve worked. There’s a big debate about what success is. I just know that at every opportunity I’ve given 100% and you can’t ask any more than that” – Tim Henman, after playing his final match at Wimbledon, helping Britain win its Davis Cup tie against Croatia

Neil Harman, in The Times:
“Tim Henman had a bit of a hangover yesterday, though he did his best to hide it. As the era of British tennis sans Henman officially began, he eschewed sunglasses on a bright day at Wimbledon, preferring to squint as Great Britain completed the 4-1 Davis Cup victory over Croatia… Now begins the collective squint for any British tennis players as driven as Henman was for 25 years. It is a significant test of the eyesight”

“I reeled off the shots like I was on the range. I hardly put a foot wrong out there” – Lee Westwood, after winning the British Masters