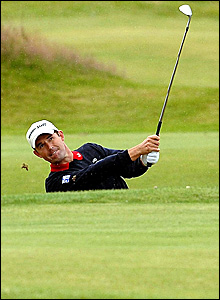 The Open is central to most of this week’s leading quotes from sport and journalism, with Padraig Harrington, Peter Alliss and Charlie Sale at the centre of the action. Plus the latest Tour de France doping scandal, massive Olympic pay-offs, David Beckham, John Terry, Bernie Ecclestone and News of the World editor Colin Myler

“Can we put ladybirds in it?” – Patrick Harrington, the champion’s small son, to his father as they examine the Old Claret Jug after the Irishman’s Open Championship victory at Carnoustie

“Of course we can. We can put ladybirds in it” – Padraig Harrington, the Open champion, to his son

“The way everyone’s terrified about breaking the rules now, rather frightens me. Especially when Charlie Sale’s about” – Peter Alliss makes an early pitch for the SJA’s Sports Broadcaster of the Year by naming names during his Open Championship coverage

“This is the icing on the gravy” – the Open’s first reserve, Lucas Glover, after his opening 71 at Carnoustie

Harrington, the morning after the four rounds before
“I went to bed about four o’clock and woke up again around six. I woke my wife up and said, ‘I am the Open champion.’ The trophy was lying at the end of the bed and both of us were looking at it in awe. It was one of those reflective moments when you sit back and say, ‘I can’t believe I’ve done it.'”

“My goal has always been to win more than one Major. Now I’ve won one, I’ll try to win another. But if I’d have lost it, I don’t know what I might have done about playing golf again” – Harrington

â€œThis is an absolute scandal and disgraceful waste of taxpayers’ moneyâ€ – Dee Doocey, the LibDemsâ€™

London Assembley Olympics spokesman, on the revelation that American multi-millionaire pocketed more than Â£600,000 after just 10 months of two-day weeks at the Olympic Delivery Authority

“We are always made to look like animals without brains. I am not a criminal. I am only trying to do my work in the best conditions I can” – Alexandr Vinokourov after winning Saturday’s Tour de France time trial, and before his drug test results showed he had been blood doping

“It is a disaster for the sport. There will be no cycling in 10 years if this goes on” – British cyclist Bradley Wiggins

“It was very emotional – I think just proudness of the way people reacted to me today personally” – David Beckham after his debut for LA Galaxy, continues to demonstrate that he is learning to speak fluent American

“Just because a club says a player is not for sale, it doesn’t necessarily mean that” – Roy Keane takes a typically unique view

“We have signed two young players, although one is younger than the other” – Sven-Goran Eriksson

“United must be favourites. They won the title by six points last year and they have been freely spending to strengthen their squad during the summer. They are not prepared to settle for what they achieved last season. They want to improve again. They have certainly done that with the signings they have brought in” – John Terry, Chelsea captain, on prospects for the Premiership season

“I can’t deny that SK Brann were the better team” – Carmarthen manager Deryn Brace. His side lost 8-0

“I have stayed loyal to Arsenal, but all the players from our unbeaten season have left. When Thierry left this summer, it felt like the end” – Freddie Ljungberg signs for the “more ambitious” West Ham

â€œGraham Brown is certainly not a racist and he is horrified at the impression he has left and the impact of some of his remarks. He accepts that his comments were ill-judged and he apologises unreservedly for any offence he has causedâ€ – Peter Dawson of the R&A by a colleague at the Association of Golf Writers’ dinner apologises for some “jokes”

“I would say there’s 10 guys taking something. I might be way out. It’s definitely not going to be lower, but it might be a hell of a lot more” – Gary Player states his view on performance-enhancing drugs use in golf

“Isnâ€™t it more likely weâ€™ll hear the mission bell rung in hope of rescue?” – Hugh McIlvanney on the “missionary” work of the Beckhams in America

“It is a brave man who says the course is too easy before he plays on it” – Peter Dawson, R&A, ahead of the Open’s return to “Carnasty”

27% – increase in takings in the Bollinger tent on the Friday at Carnoustie compared with the same day at the 2006 Open. The tent closed around 5pm when the Â£53-a-bottle champagne ran out

“According to reports out of Britain, Kelenna Azubuike may be playing for the British National Basketball team. Yes you read that correctly. The article reports that Kaz has made the final 24 for the British national team, although ‘Azubuikeâ€™s nationality status remains unresolved’. I believe I remember that Azubuike was born in England, but once at Kentucky I never heard anything else about itâ€¦.and now out of nowhere, he has gone all Tony Blair on us” – American blogger picks up on reports on sportsjournalists.co.uk

“Everybody knows him and everybody likes him. However, the News of the World might change that” – NoW Editor Colin Myler on his appointment of Paul McCarthy as his new sports editor

“I was part of a front row that were all PhDs – conclusive evidence that a PhD does not confer intelligence” – Dave Collins, now performance director at UK Athletics, recalling his days playing in the front row for Northampton and Saracens