More quotes from the world of sport and journalism. Roy Keane tops the polls this week, the wag. But Sir Alex and his missus, the little winker and referees, the return of Sven-Goran Eriksson, Jamie Redknapp, David Beckham and English rugby all feature, as do David Bond, Martin Samuel and Chris Hewitt

“The idea of women running the show concerns me

and worries me, but the players we’re talking about are soft. Priorities have changed in footballers and they are being dictated to by their wives” – Sunderland manager Roy Keane wags the finger over WAGs

“I told her I had a match but she wasn’t having any of it” – Sir Alex Ferguson explains that he had to miss a friendly because his wife, Cathy wanted his help to move home

“I cannot see how England are going to win Test matches against decent sides with a wicketkeeper who is woeful” – Ian Chappell, former Australian Test captain, on Matt Prior

“This is hard to believe, but somewhere on the planet there is an insect with a bite big enough to leave Andrew Sheridan in need of an intravenous drip” – Chris Hewitt, writing in The Independent, on the latest set-back to the England prop forward

“Tottenham is a club with a lot of politics around the team. It’s not healthy to have that amount of politics” – now Middlesbrough striker Mido‘s farewell to White Hart Lane

“My agent let me down badly there” – Paddy Barclay, of the Sunday Telegraph, on Sky’s Sunday Supplement, reveals that he does not fly first-class

Martin Samuel in his weekly column
Before waving farewell to Frank Lampard next summer, his employers may wish to put a price on replacing a man capable of scoring 20 goals from midfield in four English seasons on the spin. Oh, thatâ€™s right, there isnâ€™t one

him what you’ve got and then go in hard” – Jamie Redknapp. Oooo errrr, missus.

“Readers won’t notice the difference” – owners of New Zealand’s largest newspaper group, which includes the Herald, after the announcement that subbing and page lay-out at 20 titles is to be outsourced

“Whoever drew up this report for PMP clearly has no idea of what it takes to put on a major athletics event. If it doesn’t have a warm-up track then, again, it will be no better than Crystal Palace” – an unnamed official’s quote in a David Bond‘s Telegraph report that suggests the Stratford Olympic Stadium will have little post-Games use and another Olympian planning muddle

“Everybody should run the 100 metres; nobody should do it for a living” – Prof Lincoln Allison puts forward his thoughts on modern, professional sport, and sportswriting

“He will train but he will not be able to join up with England. 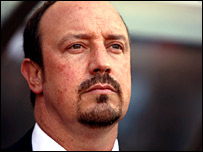 I will talk to Steve McClaren and I am sure he will understand” – Ricky Gervais, pictured (or was it Rafael Benitez?), explains how Liverpool’s captain, Steve Gerrard, is fit to play with a broken toe for his club, but not his country

“We had a player who didn’t even ring us back this summer because his wife wanted to move to London – and, yes, shopping was mentioned. To me it’s wrong to sign for a club with half the crowds and less attention” – Keane warms to his theme. Prawn sandwich anyone?

“He was surprised at the decision. But Steve Bennett has sent him off before, and I think he took great delight in sending him off too” – Sir Alex Ferguson criticises the referee after Ronaldo was sent off at Portsmouth

Rugby World Cup accreditation conditions. Next, Mr Faust will be asking for that signature in blood:
“For the avoidance of doubt, RWCL shall be entitled to use and reproduce, free of charge, worldwide and for the whole duration of protection by applicable intellectual property law, any and all photographs/images captured by any Accredited Photographer at any Venue for RWCL’s non-commercial purposes and Accredited Photographers shall make the same available on request”

“I’ve noted that tackles from behind are going unpunished and it is players like Ronaldo who are going to be the victims. We are going to get someone with a serious injury. There is every chance it could be Ronaldo” – Sir Alex returns to the theme of his star player

â€œIt was a good win. We showed we are a good team. And thatâ€™s goodâ€ – welcome back Sven-Goran Eriksson

â€œBoth sets of supporters are singing the same song. Of course ‘Thereâ€™s only one Keano’, applies to both sides. And that makes them both wrongâ€ – Guy Mowbray on Match of the Day

Patrick Collins in the Mail on Sunday:
“There was a moment the other evening when it seemed that Frank Lampard had forgotten his script. The ball was in the back of the Reading net and the Chelsea player was reeling away in celebration. Then he stopped and remembered what celebrity footballers do on such occasions. He grabbed his shirt and kissed the club badge… Badgekissing demeans both the kisser and those who are, by patronising implication, kissed. In short, it gives insincerity a bad name”

“You don’t like Batesy and you don’t particularly like me, but at the end of the day… you’ve got us” – Dennis Wise gives Leeds fans the good news

“I will probably get a lot of sticks again this season” – Sven, again

“Evra’s literally left him for dead there” – Jamie Redknapp, again