Contenders for the SJA’s Sportsman of the Year have emerged in force this week. Here’s a selection of quotes from some of them, and from others who we suspect have little chance of gaining your vote

“I’ve always pushed, even when hurt, to play for my club and my country. Your career is so short and I’m hungry to play in any game and score any goal” – Michael Owen, pictured above

“If there’s such a thing as reincarnation, he would want to come back as himself” – Ricky Hatton, one of the contenders for the SJA’s Sportsman of the Year award, on Floyd Mayweather, his next world title opponent

“I am embarrassed that the events of one evening have led to me being in this situation” – Doug Howlett, the All Black arrested after trashing a car outside his London hotel following his side’s exit from the Rugby World Cup

Lawrence Donegan on Victor Conte, the founder of the Balco steroid lab
“He is, without peer, the greatest sporting whistleblower of modern times. And for this service he was verbally attacked and ridiculed by those who run those sports he accused of doing nothing to rid themselves of the cheats and, yes, also by journalists. That is what happens to those who wish to relay unpalatable truths. Until it turns out they were telling the truth all along, and those who sought to discredit them were not”

too much money riding on it. It comes down to dollars. The Olympics are marketed as this elite competition and nobody wants to admit it’s all false” – Conte, vindicated by the Marion Jones part-confession, lets loose to Rick Broadbent in The Times

“If you guys can’t beat those French bastards, it’s a waste of time for all of us” – US country singer Kenny Rogers, whose song The 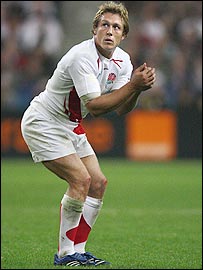 Gambler has been adopted by the England rugby team

“In choosing to live by the boot, France died by the majestic boot of Jonny Wilkinson. With formidable tenacity, England waited for their time – or rather, the last five minutes” – L’Equipe

“I’m devastated, as you’d expect. It’s cruel, but that’s what sport does to you” – Josh Lewsey, ruled out of the final with injury

“This group of players has come so far and I can’t imagine they would be satisfied just with getting to the final. They want to create history” – England coach Brian Ashton

“If the World Cup is cut from 20 to 16, I think that will be the end for rugby” – Argentine scrum-half Agustin Pichot lobbies the IRB on behalf of rugby’s emerging nations against New Zealand plans to reduce the number of competing nations in 2011

“Like a spoilt child whingeing because he has dropped his last sweet” – former referee Graham Poll in a stinging attack on Crystal Palace’s new manager, Neil Warnock

“Neil’s outlook and attitude are very similar to mine. I see this as a dream ticket. We’re two very ambitious guys and he is here to take this team into the Premier League” – Palace owner Simon Jordan

Self-praise is no recommendation: does this blog entry from the Croydon Advertiser epitomise the worst of local journalism?
“Our sports desk did a really good job this week with the Neil Warnock story, particularly as the press conference confirming his appointment came right on our deadline. So it would be churlish to point out that they made things even worse for the departing Peter Taylor by turning the draw with Hull into a defeat in the page 83 headline”

wish I could take Wentworth around the world with me” – Ernie Els, pictured left, after winning the HSBC World Match Play for the seventh time

“As Alex McLeish surveys his depleted squad for the penultimate challenge of a colossal campaign, against Georgia in Tbilisi on Wednesday, the presence of McFadden in such gallus form will be a source of profound reassurance. He has scored in each of his last three internationals: an iconic match-winner against France in the Parc des Princes sandwiched between a pair of stress-relievers against Lithuania and Ukraine at Hampden Park” – Darryl Broadfoot in the Herald

“It may be difficult for Scotland to finish off the job because they are not used to being in first position” – Italy’s Fabio Grosso, scorer of last year’s World Cup-winning penalty