Football’s back, in case you hadn’t noticed, and this week’s quotes reflect that, with Arsene Wenger, Roy Keane, Frank Lampard, David Beckham and an aggrieved Leeds United manager, not forgetting Wayne Rooney’s foot (again). Plus we have the US PGA Championship, Test cricket, Cowes Week, some offerings ahead 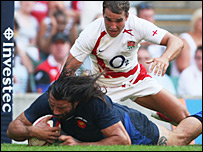 “Nobody in Europe likes England. England invented the sport but has never made any impact on world football. England is an irritant” – Jack Warner, the vice-president of Fifa, demonstrates his prejudice. Despite proven corruption over ticket sales at the 2006 World Cup, Warner has not lost his Fifa office

“You work incredibly hard by opening up three or four opportunities in the second half and you blow every one of them. You don’t win World Cups playing like that” – England rugby coach Brian Ashton, after England’s defeat to France at Twickenham (pictured)

“As far as the title is concerned, I go for Chelsea” – one to store away for later use from the BBC’s Alan “You’ll win nothing with kids” Hansen

“Some series you lose when you know you have played some really bad cricket, but in this one, we haven’t played that badly. We have been up against a very good India team” – Michael Vaughan on Englandâ€™s first home series defeat for six years

Sam Wallace, in The Independent, on the impact of Wayne Rooney’s latest fractured metatarsal
“One year and one day earlier Steve McClaren had begun his England revolution by dropping David Beckham â€“ by Sunday he did not have the luxury of being able to disregard any fit potential players”

“It’s a bad blow not just for us but for England as well. I spoke to Steve McClaren last night and I could sense his disappointment as well” – Sir Alex Ferguson on Wayne Rooneyâ€™s injury

“My intention is to stay. I’ve got two years left on my contract and I want to stay for the rest of my career, it’s as simple as that. I hope it gets sorted. The club know that, they know my intentions and it’s certainly not a money issue. Figures get banded about but the issues I have with the club are not money issues. This is my biggest contract, my last contract that will finish my career and I want to get it right” – Frank Lampard suspends his contract talks with Chelsea

“Not only have they taken my arms and legs off, now they’ve cut my balls off as well” – Dennis Wise,

Leeds’ manager, after the Football League upheld the 15-point penalty against his club

Alan Ruddock, in The Observer
“Sly Bailey, Trinity Mirror’s chief executive, must be a pin-up girl for long-surviving and uninspiring executives the world over. Under her insipid leadership the company’s national titles have continued to slip and slide towards insignificance, yet still she marches on, unchecked by a board that must have lost the will to live”

“If the fans want the manager out, they’ll have to have me out as well” – Niall Quinn, chairman at Sunderland, standing by his manager

“Lots of teams have lost before they leave the tunnel. That will not happen to a team of mine” – Roy Keane, Sunderland boss and a man who, when a player, never lost a battle in the tunnel

“You’re missing your goalkeeper and right back, but otherwise, is this your first-choice 11?” – the first question asked on air by Setanta’s pitchside interviewer, Alex Hayes, to Aston Villa’s Martin O’Neill

“He hasn’t fine-tuned, he’s gone wholesale for the biggest players. They’ve spent an awful lot of money and I believe they have got the squad to contest the championship. I actually think they are capable of winning the championship. I think they are as powerful as Man United and Chelsea” – Villa manager Martin O’Neill has no qualms about heaping pressure on his side’s opening day opposition, Liverpool, after their $80 million summer spree

Grahame Jones, in the Los Angeles Times, covers David Beckham’s American league debut
“With a sellout crowd of 46,686 watching his every move, Beckham, who had been on the sideline, jogging and stretching and squinting through the downpour, stripped off his Galaxy warmup top, slipped into his already famous No. 23 game jersey and stepped onto the field for the first time in an MLS match.
“By then, of course, it was too late.”

“We’re very lucky to have four strikers in the same squad. People say it won’t work, but they are all different – apart from the fact that they all score goals” – upbeat Spurs skipper Ledley King

“Sometimes I watch tapes of Arsenal games and I see a man on the touchline I don’t recognise. Then I realise it is me and that can be frightening” – Wenger

“Billy Bonds is reviled and Lance Armstong feted, the differing responses to these two controversial athletes says much about modern America, argues Will Buckley” – from the Guardian Unlimited website, and we were quite unaware that the Americans took such a strong view about West Ham United

â€œItâ€™s like playing crazy golf instead of Wentworth. The best golfer will probably win but youâ€™ve a better chance of beating Tiger Woods at crazy golf than you have at Wentworthâ€ – sailor Andy Rice on the attractions of Cowes Week

“I would probably just run for another country. The Olympics is the pinnacle of any athlete’s career and losing the appeal would change my whole outlook” – Christine Ohurougu, back after a one-year ban for missing drug tests, contemplates her options should she be barred from running for Britain at the Olympics

“You should always train hard and bust your butt. Not everyone considers golf a sport and they don’t treat it as such. You pay the price” – Tiger Woods on the secret of his success, after claiming his 13th Major in gruelling conditions

“I’ve been playing slots… Did good the first day, didn’t do too good the second day” – mercurial John Daly explains his preparations for the USPGA Championship, where he shot a first-round 67

“I knew if I made that putt it would be a nice little record to have. I thought it had gone in. But 62.5 isn’t bad” – Woods, after shooting a Majors record-equalling 63 in the second round of the USPGA

“It was five weeks on the lash in Spain. So the four training sessions a day here is a bit different. But I’ve done everything that the young boys have been doing and don’t feel out of it” – Mike Catt compares his preparation before the 2003 World Cup, when he was a late call-up for the England squad, to his role as 35-year-old elder statesman for England this year

â€œProbably the worst was when the Sky Sportsâ€™ camera focused on my family at the end of the South Africa game. They knew what they were doing. That was cheap. Cheap journalism. There are certain things you donâ€™t doâ€ – Andy Robinson, the former England rugby coach, reflects on the lowest of low moments towards the end of his reign