This week’s quotes of the week will not be carrying what The Times‘s Matthew Parris said of his sports desk “colleague” and spinning diarist Alistair Campbell, but otherwise you can seek out the pearls of wisdom from Peter Alliss, Sir Alex Ferguson and world anti-doping chief Dick Pound

“I was drained mentally and physically. It was a huge occasion, the record was on the line… To see Bjorn after the match was very special. It was very fitting from my 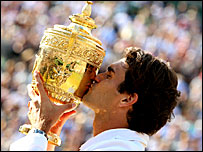 â€œMy dad always tells me to mix it up, but ultimately I like to go for it really, really hardâ€ â€” Venus Williams on the aggressive style that landed her a fourth Wimbledon title

“I hope my win with Jelena will inspire people. I think I would be inspired if I saw a British person win there” – Jamie Murray after taking the mixed doubles title at Wimbledon with Jelena Jankovic. Murray is the first British winner at Wimbledon for 20 years

Martin Kelner wonders whether any broadcaster other than the BBC is suited to covering Wimbledon
The All England Club and its host broadcaster are inextricably linked, like a long-time married couple, each of which has grown to resemble the other. In some respects, that is a good thing… On the other hand, if one were to talk of an overpriced, wasteful, puffed-up outfit overwhelmed with self-importance, adept at sucking up at the top table, while showing contempt for the poor bloody punters who keep the enterprise going, you would be hard pressed to know which of the couple was being referred to.

“I felt I had let the side down on Saturday. I felt I hadn’t done anything. I remembered that in 1994 I went to see the race in Brighton.

I waited four hours on the barriers, the break came and then Chris Boardman came and attacked the bunch and it made my day. I can still remember how excited it made me at the time, and I had that in mind today” – David Millar (pictured left) on his motivation for his solo attack in front of the massive home crowds on Stage 1 of the Tour de France

“It’s weird drinking when you’re a professional cyclist. This will sound stupid, but because our legs are so big, the alcohol just drains into them and they’re wrecked for a week afterwards. After a night out, you can’t train properly for a week. It’s crazy – you just feel awful” – rider Mark Cavendish, at 22 in his first Tour, and clearly someone who won’t be going out for a drink for the next week or two

“It was a big lesson in moral courage from the British people two years after the terrorist attacks of 7/7 and just after two failed attempts. It was not only that there were hundreds of thousands of people there, but they were all happy and relaxed, and the backdrop was incredible. It was not just a colossal popular success but one that took place at the foot of Big Ben, in front of Buckingham Palace and with a village dÃ©part 100 metres from Downing Street” – Tour de France director Christian Prudhomme

, chief executive of Russian-owned Chelsea, lets manager Jose Mourinho know that a date in Moscow in May is obligatory

â€œI donâ€™t know all the intricacies of it, but the outcome will be that weâ€™ll be taking Tevez with complete transparency in the deal, with no suspicions and nothing dodgy about itâ€ â€” Sir Alex

“Doping is organised, systematic well-financed, well-researched cheating. This is not going to go away by holding hands and having a Zen thing and going ommmm” – Dick Pound, chairman of the World Anti-Doping Agency

Geoffrey Wheatcroft, in The Guardian, on the morality of modern sports
“For years bike racing, and the Tour in particular, has been shrouded in a miasma of scandal, with accusations of doping made against – and sometimes confessions of doping made by – half the Tour winners in living memory… But if cycling is in a bad way, it’s not alone. The Champions League was won this year by a team which should not have been competing at all – the victors, Milan, had been relegated for their part in Italy’s match-fixing scandal… In his Guardian column not long ago, the great French back Thomas CastaignÃ¨de said that he would not encourage his son to enter professional rugby nowadays, and anyone can understand why. But which of so many tainted and corrupt sports would anyone want to play any more?”

“If Test cricket is a Penguin Classic and one-day cricket is Nuts magazine, then Twenty20 is indubitably a cheeky bit of top shelf filth. You’re well aware it’s a bit wrong, but, in your heart of hearts, you know it’s more enjoyable than the other two” – Ben Dirs, reporting on the West Indies v England Twenty20 game for the BBC website, gives away a little too much personal information

“I can’t say I’m afraid of losing. Every year, with a new season, I know I’m not unbeatable. And if somebody beats me I will have to say, ‘You did a great competition. Congratulations.’ I’d be very disappointed but I would be a good loser. That is important because my life will not end with defeat. The world will continue spinning” – Sweden’s Carolina Kluft, the world, Olympic and European champion, who has not lost a heptathlon in five years

stomach to play for England. Thousands, though, Jamie? It was TalkSport, after all…

“I’ve no hobbies. I love my job and that’s it. I’ve nothing else to do with myself. I suppose I could light bonfires. I’m not a pyrotechnic but I do enjoy a bonfire. I envy Alex Hay, who paints watercolours, but I’m too lazy to do those things. But I do like clubs. I was brought up in clubs. I love the atmosphere, the gossip, the intrigue, the petty feuds, the fun. I don’t suppose five per cent of today’s pros would know what the hell I’m talking about” – BBC golf commentator Peter Alliss (pictured, left), in an affectionate pre-Open interview with The Observer‘s Bill Elliott

“I thought the lads gave every last ounce of energy they had, but they came up that little bit short” – Archie Gemmill, Scotland’s under-20s coach, after his side’s defeat to Costa Rica in the junior world championships

“Who will take my place? I don’t think they’ve found him yet” – Alliss, at 76 confident he will remain the “voice of golf” for a few years yet