NORMAN GILLER has picked out 20 memorable quotes that made it on to the SJA website during the past 12 months. Prepare for the Christmas festivities and see if you can identify who said what. Award yourself an extra mince pie if you get 14 or more right. Cartoons by KEVIN MACEY

1. “Can you believe that? A female linesman. Women don’t know the offside rule.”
a) John Motson; b) Andy Gray; c) Richard Keys 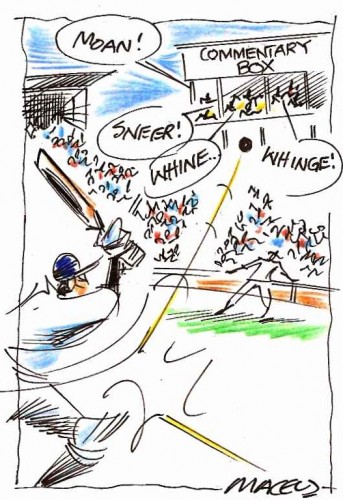 2. “We came here to Stoke a couple of years ago when I was at Spurs. Here, you have to be perfect. You get kicked, punched, elbowed and kneed. I don’t mean illegally. That’s just football.”
a) Gus Poyet; b) Chris Hughton; c) Martin Jol

3. “It’s very easy those guys in the commentary box criticising us for making mistakes on the field. What they forget is that not so long ago many of them were out there making the same mistakes.”
a) Jimmy Anderson; b) Andrew Strauss; c) Graeme Swann

4. “If somebody does have a problem, I would respect them coming to me in person. There are certain players at clubs who don’t get on with each other. That’s life.”
a) John Terry; b) Rio Ferdinand; c) Steven Gerrard

5. “The alarm bells have been ringing recently regarding my long game but nothing to hint at this. On a course where you have to be in control of your game, I was in control of nothing. My driving was weak, iron play poor, putting truly awful.”
a) Tiger Woods; b) Graeme McDowell; c) Darren Clarke

6. “I’ve been practising better and training hard but on the match court I can’t get anything going. I am pissed off. I don’t want to be playing like this. I don’t know exactly what it is.”
a) Rafa Nadal; b) Roger Federer; c) Andy Murray 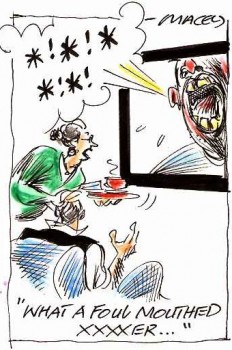 7. “Part of a coach’s job is to coach people to handle pressure moments. You would hope clubs would be big enough to ban players themselves. The penalties are so light in football. In rugby, Neil Back was banned for six months for pushing a referee.”
a) Sir Clive Woodward; b) Martin Johnson; c) Brian Ashton

8. “I am not the first player to have sworn on TV and I won’t be the last. Unlike others who have been caught swearing on camera, I apologised immediately. And yet I am the only person to be banned for swearing. That doesn’t seem right.”
a) Joey Barton; b) Andy Carroll; c) Wayne Rooney

10. “My lads are going to the PFA dinner, a disguised booze-up with ties on, back-slapping and ‘Aren’t we good?’ Load of nonsense.”
a) Harry Redknapp; b) Neil Warnock; c) Ian Holloway

11. “I can’t remember my last win it was so long ago. Every inch of the race, every second was incredibly enjoyable. When you win from the start it’s beautiful, but when you win having come through people and you really have to earn it. I exist, I live and breathe to win: I love winning and I couldn’t be happier.”
a) Jenson Button; b) Mark Webber; c) Lewis Hamilton

12. “I will take Rory aside as a member of the team. I will give him sympathy first. I will tell him to take positives. I will speak as someone who has had major heartbreaks.”
a) Colin Montgomerie; b) Lee Westwood; c) Ian Poulter

13. “The Chinese are so far ahead of everyone else at the moment. They are like machines. They are so good right now they can only throw away the gold medals at London.”
a) Nathan Robertson; b) Tom Daley; c) Paul Drinkhall

14. “We rode like madmen to try to stay inside the time limit. If I stop to pee, if I crash and change a wheel, I always have a race official – as well as an ice cream truck and a marching band – all watching me. If I can cheat them I’m David Copperfield.”
a) Bradley Wiggins; b) Mark Cavendish; c) Ian Stannard

15. “I like a challenge. Sometimes it is gutsy and risky and that’s why sometimes I fall flat on my face because I take that risk. I have had failure and I don’t fear it”
a) Sven-Göran Eriksson; b) Steve Bruce; c) Steve McClaren

16. “If you let Rafa get on top of you he’s like an express train”
a) Virginia Wade; b) Sue Barker; c) Annabel Croft 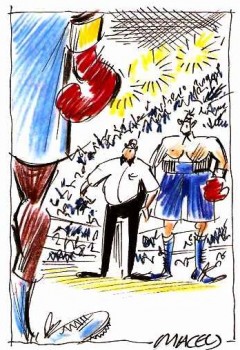 17. “We are proud defenders of the beauty of the game. It’s not just a question of winning, but winning with a certain flair. I expect to be successful, on a weekly basis. I’d be surprised to be kept on if I don’t win.”
a) Martin Jol; b) Roberto Mancini; c) Andre Villas-Boas

18. “Look at me, I feel good. I feel strong and when I see guys out there who are smaller than me I start thinking I can come back and knock out most of them. Then I talk myself out of it”
a) Lennox Lewis; b) Mike Tyson; c) George Foreman

19. “I have a harsh attitude to those who, in the modern News of the World, have managed to discard, without any remorse at all, employees like sub-editors, who are the reporter’s greatest friend. Each evening, I raise a glass and offer a toast to someone. Last night it was ‘to the old News of the World’.”
a) Sir Peter O’Sullevan; b) Richie Benaud; c) Piers Morgan

20. “I’ve never had such an easy year, but if I go easy I get lazy. I slacked off doing my back exercises but now I’m working hard again. I don’t remember the last time I ate KFC. I haven’t had a Guinness for about three months. I party less. I’m allowed out sometimes, but it’s no alcohol and back home early to bed. It’s the way it has to be, but it sucks.”
a) Phillips Idowu; b) Dai Greene; c) Usain Bolt