The SJA’s resident old blogger NORMAN GILLER has picked 25 memorable quotes from the past 12 months. Take a break during the Christmas festivities and see if you can identify who said what.

1. Who said: “The last time I felt really confident was a couple of years ago when I won the UK, the world championship and made a few 147s. Then it all disappeared”?

2. “Some of the things Sepp Blatter has said defy belief. Comparing footballers to slaves. Completely crass. Any other organisation would have got rid of him years ago.” 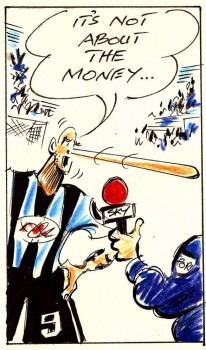 4. Who said: “It’s not about the money, it’s about playing football and the love of the game. It’s no longer a hunger, it’s a craving”?

6. “I feel Tiger has not carried the same stature in the game as other great players like Jack, Arnold, Byron Nelson and Ben Hogan. I think he needs to clean up his act and show the respect for the game that others before him have shown”

7. “I didn’t get much sleep last night, reading text messages under my duvet. Everyone believed in me more than I believed in myself.”

9. “For all that I have done, I am so sorry. I never thought about who I was hurting. I thought only about myself. What I did is not acceptable. I am the only person to blame.”

10. “A big club will always go for that big name, a sexy name. You’ll have to ask my wife if I’m sexy and she’ll definitely say no.”

13. “The biggest annoyance for me, even in our position, is when people don’t try. I said to the lads at half-time ‘We’re 2-0 down and I am not prepared to accept another five-goal thrashing.’”

14. “I hope that one day I will wake up and think that this is not for me. That I am not as good as I was and can tell myself not to make a fool of myself by carrying on too long. But I’ve got a funny feeling someone is going to have to drag me down and tell me.”

16. “When I first played Twenty20 I used to think of them as exhibition matches, but it’s a serious business now and the more times you play this format the better you become.” 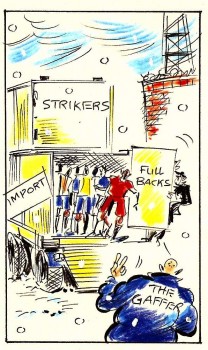 18. “I am not afraid of anyone or anything in this World Cup unless they are wearing a mask. Fear doesn’t exist in football. Whoever is afraid should stay at home.”

19. “I get on great with everyone. It’s part of the way I play and part of what I do. If I’m in charge of the keg of Guinness, that will be great.” 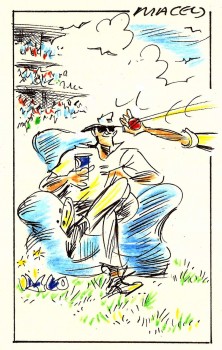 22. “I was happy to pull up an armchair at second slip, have the best seat in the house, and watch my mates do all the work. I’m an inherently lazy person and will be happy to do nothing again if the others bowl as well as they did at Trent Bridge.”

23. “Playing with Tiger makes you focus more and that’s what I need after a fortnight away from the game. I think he likes playing with me, too. A lot of players act differently when they’re around him but my caddie and I take the mickey out of him and he returns in kind. It’s probably what he needs right now, with everything that’s going on in his life.”

24. “We have supporters who follow us all over the world and spend large amounts of money doing it. I can understand their frustrations. I’m sure there will be boos at times. If I was a fan, I’d probably boo too.”

25. “Our message to the 24 FIFA executive committee members is that a World Cup in England will do more than any other tournament to help develop football as a platform for social and human change across the world.”

The answers will be posted here from Dec 27.