“He is the greatest British endurance runner ever. And I’m the second best! Down the back straight it was all British flags. It was a glimpse of 2012, the best half-hour of my life” Chris Thompson, proud to finish second to Mo Farah in the European 10,000 metres, and acclaiming his mate’s greatness four days before he became only the third man in 50 years, and first Briton ever, to complete a European 5,000-10,000 double.

“If he wants to go to heaven before me, he can. I don’t want to go to heaven. It was the most dangerous thing I’ve ever been through. Talk to Michael? He will always feel he is right” Rubens Barrichello survives being shunted into a pit wall following a reckless manoeuvre by seven times champion Michael Schumacher.

“I always maintain that when the ball is swinging there is no better bowler in the world than Jimmy” Andrew Strauss, Jimmy Anderson’s captain, pays tribute to the bowler after his 6 for 17 in the second innings and match figures of 11-71 in England’s first Test against Pakistan at Trent Bridge, which they won by 354 runs.

“What is crucial now is that all sides engaged in this decision understand not only the issues but also the risks involved in such a move” Baroness Campbell, chair of UK Sport, reacts to Culture Minister Jeremy Hunt’s announcement that he will merge UK Sport with Sport England.

“Monday’s cuts announcement was only decided by Hunt on the previous Thursday. 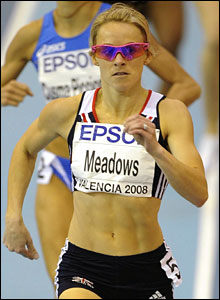 There were no proper costings or future planning. Hunt is only interested in raising his own profile with David Cameron. He wants a bgger job, a ‘proper’ job” Official at DCMS, according to a report in the Sunday Herald.

“She’s the winner of the 10,000 metres, quite literally” Brendan Foster in BBC commentary. Literally.

“It’s confirmed that I can start believing in myself. I’ve got two world medals and now a European. Maybe now I have to take myself seriously” Jenny Meadows, right, bronze medallist in the European 800m.

“I kept getting injured and being shouted at by the coach. I wasn’t enjoying it so I walked out. Now I like being shouted at and I have a very strong work ethic” Dai Greene gave up life as a Swansea City junior footballer to become European 400m hurdles champion.

“The women were a disgrace and the men weren’t much better” Charles van Commenee, British athletics’ head coach, gives a frank assessment of the 4x100m relay teams at the European championships.

“Someone will call you just before you’re going to compete and ask for tickets. Those kind of things happen because it’s your home race. You have to insulate yourself from the fact. You have to be in a bubble. I remember walking about Sydney, getting the atmosphere, because I was not the face of the Games like I was in Atlanta” Michael Johnson with a warning of what life will be like for British athletes at London 2012.

“Maybe I should have gone. It wasn’t until the week before the tournament and I started to see all the build-up that I thought maybe I’d made the wrong decision. I don’t know Capello, but maybe it would have meant more if he’d phoned me. And two hours wasn’t a long time to make a major decision and that’s probably why I said no” Paul Scholes on being given two hours by Fabio Capello’s assistant, Franco Baldini, to decide whether he would come out of international retirement to play for England at the World Cup.

“I have to say they’ve done their job well. They support myself and they’ve supported the players” Sir Alex Ferguson offers praise for his bosses, Manchester United owners the Glazer family.

“When I was a kid there wasn’t the nonsense that goes on now in football. You went to school with Blues and Reds and you went to games together. It has gone too far the other way, but the rivalry lends itself to a great future for both clubs” Brian Kidd, former Manchester United player and now Manchester City coach, on the changing face of football in the city.

“My life has changed a lot. There are millions of people who would do anything to be in my position. I dreamed of one day being able to play with these players and I’m going to learn from them. I also want to add my little grain of sand because I want us to be a great team” Javier Hernandez, Manchester United’s latest signing.

“The influx of foreigners has been far too big. They should be restricted. The only clubs with foreign players should be Premier League clubs. Right now everyone has foreign players, even down to the third and fourth divisions. They have any name, not because they are so good but because they are cheaper than the counterpart you will find in England” Ossie Ardiles, a trail blazer for foreign imports when he joined Spurs in 1978, believes enough is enough.

“I genuinely don’t know that much about football. I have spent 19 years playing in the top flight but I don’t know half of the players I have played against” David James, left, celebrates his 40th birthday with a surprise move to Championship side Bristol City.

“I’ve not played one day for England as batsman or wicketkeeper when I wasn’t under pressure. I’m very used to it. It brings the best out of me” Matt Prior after his Test-clinching century at Trent Bridge.

“What Andy has done this past week is proof he will never find himself sitting on a beach thinking to himself ‘If only I’d done that, things would have been different’” David Felgate, who coached Tim Henman, on Andy Murray’s sacking of his coach Miles Maclagan.

“The time I say I am a No2 driver I will not race any more. I am not a No2. I will fight for victory here. I’m not just here to race, I’m here to win” Felipe Massa prepares for the Hungarian Grand Prix but can’t ignore the previous week’s controversy over the team’s pecking order.

“It is a rare athlete among Europe’s winners who can say they leave… wearing the mantle of Olympic favourite” Neil Wilson, in the Daily Mail, sagely dampens any euphoria over Britain’s record 19 medals, six of them gold, at the European – ie. no Africans or Americans – championships in Barcelona.

“I’d love to keep performing the way I am and winning at major championships, but in the back of my mind I am expecting to be challenged. Things don’t always go your way, so I am fully prepared for that” Jessica Ennis, whose heptathlon score in Barcelona heads the 2010 world rankings.

“I’m quite prepared to deal with the fact that being on television means you get criticised for your hair, the wrong dress sense and whatever, but to use anyone’s sexuality as a stick to beat them isn’t the same and isn’t acceptable” Clare Balding, the BBC sports presenter, after filing a complaint over a TV review by Sunday Times critic AA Gill.