NORMAN GILLER is unconvinced by The Sun’s web changes, but is looking forward to Scotland’s return to Wembley (seriously). The flaw in his latest book proposal could turn him grey

Am I alone in thinking The Sun has scored an own goal in disappearing behind a paywall, though it will be a goal that will not be shown on its heavily advertised video replays? It has made its retreat with a fanfare, trying to convince readers to follow but losing sight of the fact that people go online for its freedom of movement, rather than crowding into a confined space. 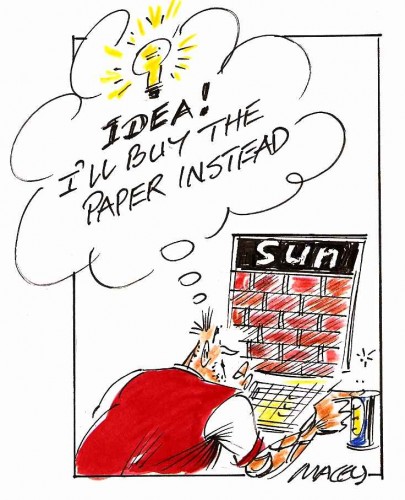 It’s easier to get a smile from an Aussie cricketer than official facts from Wapping about the early take-up of subscriptions, but a mole tells me there is a lot of nervousness around as the editorial staff juggle with what should be given priority in newsprint or saved for Sun+.

It is like putting up the shutters on a shop window in a busy, bustling high street, while their rivals carry on being open all hours. The free-to-view Mail, Mirror and Daily Star are having a ball between them scooping up the estimated 1.7 million daily visitors who have been abandoned by The Sun. Literally a free for all.

I like the Mirror message best of all: “The best things in life are free …”

Hats off to The Sun for an imaginative campaign and come-on incentives that have vigour, invention and an impressive spokesman in new boss David Dinsmoor, although I am not that convinced their readers fully understand the unique, state-of-the-art code system.

Perhaps I am buried too deep in the past, but I just cannot see how they are going to attract the 300,000 new subscribers needed to recoup the estimated £30 million-plus that the “wall game” is costing them.

I had a little straw poll (ok, a digital one) via Facebook and Twitter, asking the simple question: “Will you pay to read The Sun online, given the incentive of being able to watch Premier League goals?”

Not a single soul said they would pay to go behind the wall. Perhaps it says something about the taste of my friends and followers, but most of those who commented were brutal in their dismissal of the notion.

They are a savvy lot. Most know that while the mobile rights package The Sun offers allows eight 30-second highlight clips during all live Premier League matches, the more detailed internet videos cannot be shown online until the Monday after matches have been aired.

By then Sky, the BBC and BT (the new kid on the block) will have, so to speak, scored heavily with their football-on-a-plate service. That’s not to count the pirates who will have the moments that matter on YouTube within a blinking of an eye before the copyright holders squeeze them out.

Yes, there is always interest in seeing goal action. But to the point where Sun subscribers will cough up £2 a week for something they will have been able to see for free? I don’t think so.

Until they ducked behind the wall, The Sun attracted a monthly following of about 27 million visitors. Dipping back into when its posh stablemates, The Times and Sunday Times, became subscription-only, the evidence is The Sun’s traffic will fall by at least 90 per cent.

Call me old-fashioned, but it makes no sense to me to let all those people wander off to pastures (and papers) new. It would have surely been wiser to stand and battle with the Mail and Mirror for the millions of browsers, so attracting the advertisers.

It is not so much a wall as an iron curtain that has dropped across all Murdoch newspapers. Roop, the great newspaper baron, has in my opinion lost the plot in this digital age. He has ink in his veins, but is digitally dyslexic.

Any of his hirelings brave enough to stand up and tell him he’s got it wrong? Pay me enough, and I’ll nip on a flight to New York and tell him to his face. In fact I will do it just for the air fare, because I know I would be saving jobs.

If Murdoch had encouraged his troops to pour as much energy and expense into making a success of their free online service as they have into ducking out of sight, The Sun might have challenged the Mail’s extraordinary 110 million monthly unique hits. The marketing moguls love those kind of figures.

I truly hope it works for The Sun and all the papers that have elected to follow the paywall policy, because good, informative journalism deserves to be paid for. But we are into an era of something-for-nothing expectancy, and I will be amazed if The Sun can attract enough subscribers to make it all profitable.

Let’s resume the debate a couple of years down the line. I wonder how many will still be employed behind the wall?

MY LOYAL READER will, I am sure, be amused (amazed even) at my latest book venture. I decided in a mad moment to jump on the Fifty Shades of Grey bandwagon and write the ultimate sex novel. It meant, of course, dipping a long way back into my memory.

I was inspired after reading snippets of Fifty Shades on line. It is appallingly badly written. All the ladies I’ve known intimately have wanted to be fondled rather than flogged. Well, most of them.

For a while, I considered a partnership offer from Harry “Scoop” Harris and writing a book called Fifty Shades of Andy Gray.

But good sense got the better of me, and I went off on my own. I created a couple who meet online in a chat room, and gave it the full welly as their relationship developed from conversation to copulation.

Uh, have I mentioned I wrote the book from the woman’s point of view, using the pen name Jeni Robbins?

The book is called Keys to Paradise, the keys being those on a keyboard … paradise where I keep the couple in orgasmic heaven.

Sixty-five thousand words later, I was ready to send a detailed synopsis winging out to potential publishers.

I quickly got enough rejection notes to paper the walls of an Ann Summers shop. Then, just last week, Eureka! An American publisher contacted me by email to say she thought I had “the next Fifty Shades …”

The slight hiccup came in the third paragraph of her gushing email: “What my company is proposing, Jeni, is that you and John…” John being the male shagger in the book, “…come out here to the States and do a promotional tour. We will have the two of you on every major radio and TV talk show …”

After debating with myself, I decided there were too many hurdles. One, perhaps, the sex change. Two, what about my moustache? Three, could I at 73 pass myself off as the 38-year-old Jeni?

Back to the drawing board, or the writing desk. I am now working on Unseen Spurs, my scrapbook memories and mementoes of the golden years of Tottenham. It is my 96th book, and one that will happily accommodate my moustache and my fading libido.

JUST OVER A WEEK to go to what in the good old, bad old days was the most eagerly awaited match on the football calendar: England v Scotland. It was the weekend when the Scottish hordes would turn Trafalgar Square into Bannockburn, and when they often tried to take Wembley home with them to think (or drink) again.

It was a tradition that started way back in 1872 with the first international football match and continued as an annual battle – yes, battle – until hooligans finally forced its abandonment in 1989.

You need to be 40-plus to remember the infamous match of 1977, when the Tartan Army celebrated a 2-1 victory by invading the Wembley pitch and smashing down the goalposts and carving up huge chunks of the sacred turf.

Here’s a reminder on YouTube, with John Motson giving a measured commentary that explained why he was a master of the mic.

It is Scottish victories at Wembley that stand tallest in my memory (England’s 9-3 victory in 1961 was too one-sided to gloat over).

Clear on my memory screen is Slim Jim Baxter scoring two goals in 1963, running the show from midfield with scintillating skill and walking off with the ball stuck underneath his jersey … and in 1967 the Scots claiming they were world champions after dishing out England’s first defeat since winning the World Cup. The little matter that England had Jack Charlton limping as a makeshift centre-forward and reduced to nine fit players was dismissed as irrelevant by the Scottish players and media.

The rivalry was just as passionate off the pitch, and English and Scottish journalists used to go head to head, throat to throat in drinking contests.

I once saw “Voice of Scotland” John McKenzie – an acerbic writer on the Scottish Daily Express – take on his London colleague Des “The Man in the Brown Bowler” Hackett in a last-man standing drinking duel. McKenzie claimed victory when he managed to get Des to pour champagne into his famous bowler and drink a toast to Scotland’s supremacy.

When England and Scotland go temporarily back into battle next week, it will be fitting to raise a glass or three to the memory of McKenzie and Hackett, who literally captured the spirit of those times.

Just one plea to the Scottish fans: Keep off the pitch.