Sporting Intelligence, the award-winning website, has updated and upgraded its editorial offering, and is now also offering some project funding for young and upcoming sports writers thanks to a sponsorship from the sportswear brand, Skins. 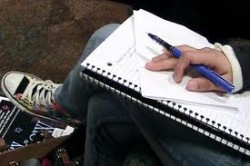 Since 2010, Sporting Intelligence has assisted a number of young journalists to get a foot on the ladder as they seek work, and is always open to ideas and collaborative projects from writers, researchers, authors and journalists. Now, they are inviting applications for project funding with the hope that they can play a small role in helping you to tell the stories that matter.

“You might need £50 for a train ticket to go and interview somebody for a feature. You might need a few hundred pounds to afford a flight and a few nights somewhere to spend a few days digging into an issue you think important,” Nick Harris, the Mail on Sunday reporter and founder and editor of Sporting Intelligence, said.

“You may have been working on a project for weeks or months that can’t be completed until you have access to books or research materials or particularly cumbersome FoI requests that you can’t afford.

“The funding available is not going to make you rich; it will, hopefully, allow a group of writers to cover subjects that maybe would not otherwise get published. As well as some funding, various contributors and experts who have worked with Sporting Intelligence will be available to offer advice, guidance and contacts to successful applicants.

“What type of stories can be funded? Anything, from an interview or feature to a hard news exclusive to a piece of original research or an investigation, as long as it’s on a sporting theme and of potential interest to readers of this site. The aim is to publish any funded work on Sporting Intelligence.”

To apply: Submit an outline proposal of no more than 500 words in the first instance, and state the amount of funding you’re seeking, and for what purpose, to tell it. Provide contact details including your name, address, phone number and email, plus up to three examples of your writing to date. These can be links. Put all the above into a single pdf and email it to submissions@sportingintelligence.com with “Story funding” in the subject line. There is no closing date, so don’t rush. Get it right rather than quick.

There is no age limit. While the funding will probably be most helpful to young writers looking for assistance to get a break, all applications will be considered.

Under the agreement, Skins also becomes a stakeholder in Sporting Intelligence’s annual review of global sports salaries, the 2015 edition of which will be published this month.