A bleary-eyed NORMAN GILLER wonders when the Australians will wake up to their Ashes cricket shortcomings, and questions whether a paywall delay at The Sun is indicative of disappointing numbers elsewhere at Wapping

Writing this while “on Australian time”, I was not surprised that the victorious Ryder Cup squad lifted the Team of the Year trophy at the SJA awards jamboree on Wednesday. But I wonder if they would have won the prize had the vote been collected and counted after the extraordinary second Test in the Ashes series?

I skipped this year’s glittering lunch because it was past my bedtime here in dozy, delightful Dorset. Watching Sky and listening to Test Match Special, I have not missed a ball of the series to date and am pacing myself ready for the third Test starting in Perth next week. My partner, Jackie, thinks I’m potty. She’s got to go.

This is a ritual I have tried to follow since the Wally Hammond-skippered tour way back in 1946, when my sports-mad father and two older brothers introduced me to the wonders of listening to sport on the wireless.

Outside our freezing council flat in the East End the ruins left behind by Hitler’s bombers were covered in snow at the start of one of the coldest winters on record. But our concentration was on the second Test action 10,500 miles away in steaming-hot Sydney.

I can remember my Dad shusshing us as he turned the dial on our Pye wireless, and as he found the crackling BBC overseas service from Down Under we could not believe our ears.

It was 64 years ago next week, and I can still remember the staggering news that Don Bradman and Sydney Barnes had scored 234 runs each and Australia declared at 659 for nine. Alec Bedser, one of my idols, went for one for 153. Even at my young age I knew that this was not good.

For the second time that year I saw my Dad close to tears in front of the wireless. He had actually cried seven months earlier in May when his hero Bruce Woodcock was butted and battered to defeat in five rounds by Tami Mauriello in New York. Wonder from whom I caught my life-long sports bug?

I have had to wait until now to get that 659 for 9 scar erased from my memory. It was deleted thanks to England’s magnificent performance against the Aussies in Adelaide … Alistair Cook (148) batting like a master and Kevin Pietersen (227) back to his brutal best as England powered to 620 for five declared.

In all my years watching the Ashes series I have never seen a more ordinary Australian side. We cannot judge just how good this England team may be because the opposition has been so woefully weak.

It was my good luck in my Express days to have as colleagues Denis Compton and Keith Miller, both of whom played in the 1946 Test that Australia won by an innings and 33 runs.

Denis told me: “Bradman and Barnes were absolutely brilliant, and if we hadn’t been so busy running after the ball we’d have applauded them. We were given such a chasing that we got sunburned tongues.” 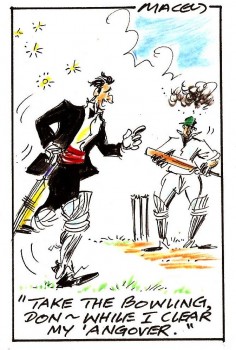 Miller shared a wonderful story that summed up his playboy approach to cricket and to life: “Bradman was the greatest batsman ever and he proved it against England in that Sydney Test. But he and I were poles apart as people and he didn’t approve of my life style.

“The Don and I fell out on his final tour of England in 1948. He was coming down the hotel stairs for breakfast when I arrived in my tuxedo after a great night out. He hardly spoke to me for the rest of the tour, and when he became a selector the following year was responsible for me being dropped for the trip to South Africa. Each to his own. I liked to enjoy myself on and off the pitch.”

During a trip Down Under a few years ago I switched on the television in the hotel to find the one and only Michael Parkinson ­– now our esteemed SJA President ­– interviewing our mutual hero Keith Miller.

Parky asked Keith about the pressure in cricket.

A Second World War fighter pilot, the Nugget famously replied: “Pressure? I’ll tell you what pressure is. Pressure is a Messerschmitt up your arse. Playing cricket is not in that league.”

The Aussies are going to need the spirit of Miller and the professionalism of Bradman if they are going to drag themselves back into the current series (my spies in London tell me that one of the SJA’s star guests, Alec Stewart, the former England captain who in his 13-year Test career never experienced a series win over Australia, advised the audience at our awards that England will win this series 3-0).

RUMOURS bounce off the Wapping walls that The Sun is holding back its paywall launch because of disappointing take up among its stablemates at The Times, Sunday Times and News of the World.

I cannot confirm it because it’s easier to get stories from Wikileaks than anything from sealed Wapping mouths.

According to the latest paywall traffic numbers – based on a Hitwise survey for The Guardian and spotlighted in the Press Gazette – just 2.34 per cent of those dropping in on www.thetimes.co.uk go on to read content behind the paywall.

The educated guess is that just 54,000 readers a month are going behind the paywalls of The Times and Sunday Times but only 26,000 are paying. The rest get free access from taking up offers in the printed newspapers.

I wonder how many of those 26,000 visitors are on the £1 a week special introduction … and will they take up the full monthly subscription of £8?

In the days before the News International papers ducked behind the paywalls they were reported to be attracting around 20 million unique users a month. Where have all the surfers gone? To the Mail perhaps, every one. When will they ever learn? When will they ever earn?

The Sunday Times launches an iPad app this weekend along with a new bundled £2 a week subscription deal. In return readers will get access to The Times daily iPad app, the Sunday Times app and both newspaper websites.

The Sunday Times app will give access to all 12 sections plus a new interactive TV guide.

A full sample edition of the app will be available to download for free from the Apple iTunes store on Friday. At launch, it will only work on Apple iPad tablet computers.

But what of The Sun? How soon before it sets behind the wall?

Think I’ll go back to sleep. I’ve got a Test match coming up when I predict England will whack the Aussies at the WACA.