You wouldn’t think NORMAN GILLER could be easily offended. But then he discovered how many four-letter words can be fitted in to 140 characters

Would you invite anyone into your home that, while discussing football matters, calls you a c*** (rhymes with Berkshire Hunt) or one who accuses you of always talking out of your derrière? 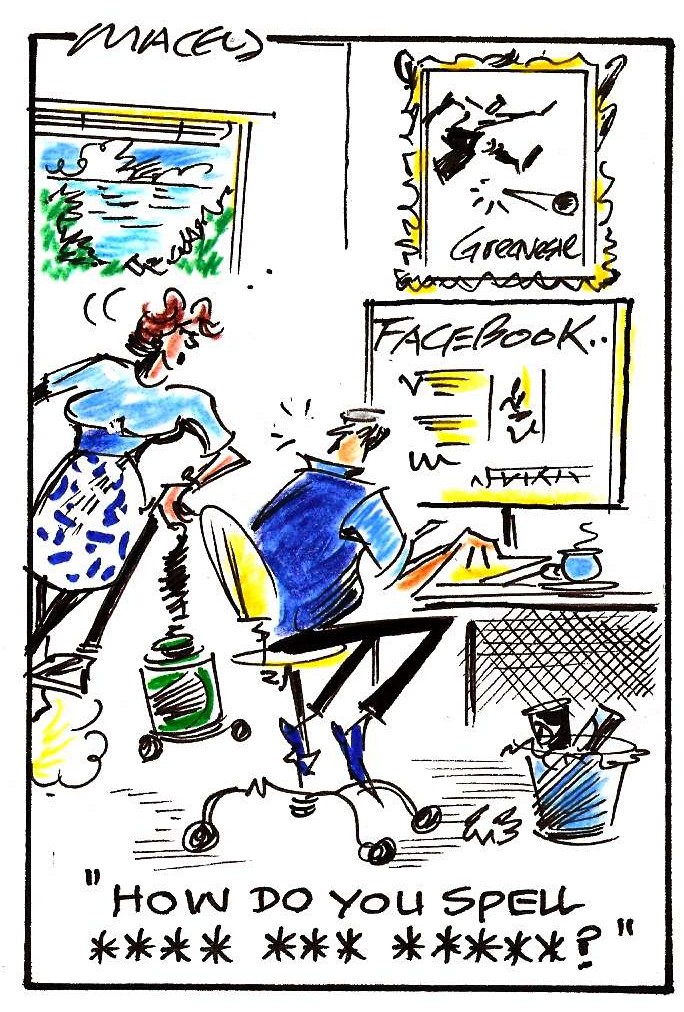 Well I have that type of person joining me every day here in my study in dozy, delightful Dorset. Not physically, but on my computer screen as I straddle the two social intercourse networks, Facebook and Twitter.

In that time I have Tweeted around 4,000 times, which is averaging more than 700 a week on top of my scores of posts on Facebook (note to self: get a life).

This is all quite exciting yet exhausting for this crumbling old ruin in need of a preservation order.

This week I decided to compare the two ethereal communication services, measuring and monitoring the volume and intelligence of the input. I chose the couple of hours on Monday evening when Manchester United were hosting Tottenham’s first Premier League match of their delayed-start season.

I had the Sky coverage live on my television set, the Facebook comments on my Apple and Twitter on my laptop.

As a Tottenham-inclined follower of the game, I was reading mainly Spurs-biased comments. Sort of sitting with the supporters at the far away end.

For the first goalless hour, all was peaceful and polite, with most Spurs fans satisfied with the progress of their team.

On Facebook there were a few volleys against Tottenham’s lack of fire power in the penalty area, while on Twitter the general concensus was “so far so good”. As Spurs have not won at Old Trafford for 21 years, there is never a high level of optimism.

At 60 minutes it was going so smoothly that somebody (it may have been me) posted on Twitter and Facebook: “I have rarely seen such a faceless and feckless Manchester United team. Spurs can win this.”

What a Berkshire Hunt. There was hardly time for the post to register before United scored the first of their three goals and suddenly looked like a team from another planet. These Fergie Fledglings could rule the roost for the next five years.

When Rooney scored the third goal, the mood turned ugly. I was going to quote a few of the Facebook messages, but I will spare you the obscenities. On Twitter, restricted to 140-characters, the posts were less vile but just as vicious.

I spend much of my time on the two outlets defending my old mate Harry Redknapp, a pal from way back in the Bobby Moore-school Black Lion drinking days at West Ham. I have never known anybody as hungry for tactical knowledge than Aitch, but to read the unkindest of the Spurs fans, you would think he doesn’t know an overlap from an underpass.

He has provided Spurs fans under 45 with the two most entertaining back-to-back seasons of their lifetime, but many of them give the impression they would like to hang him from the nearest crossbar.

I have a mantra on Facebook and Twitter: conversation not confrontation. But I found myself getting dragged into on-screen arguments with the idiots bringing in personal references to Harry’s face and occasional twitching.

They are too ignorant to realise that this is the result of a tragic car crash in Italy during the 1990 World Cup, when he was dragged half-dead from the wreckage, the only survivor from six people involved. It was touch and go whether he would pull through and he had to have facial surgery and several life-saving operations.

He was in Italy at his own expense, driving to as many venues as possible to increase his tactical knowledge. What character he has shown to achieve so much after surviving an horrific episode that would have had most people seeking a quiet, sheltered life.

Back to the Twitter v Facebook battle. Without doubt, Twitter attracts the more thoughtful, educated types who are not put off by the prospect of having to present their thoughts succinctly and with sufficient appeal to attract followers.

The Facebook football forums tend to draw the younger, cursing class, who litter their blunt opinions with swear words that make this sensitive old git cringe (having been brought up in the East End, I am not accustomed to such language).

Thankfully, my Facebook page has attracted a gathering of bright, erudite posters who trigger deep and fascinating debates not possible in the rabbit hutch setting of Twitter.

For the instant, immediate soundbite discussion, Twitter wins by a mile. Facebook needs to stop meddling and tinkering with their system and tighten their security or the trickle of members already leaving will become a flood.

It is a fact that Twitter has launched 21 billion Tweets since it first hit a screen near you in 2006. Facebook, started just six years ago, has more than 500 million members.

Studying the two formats, I am convinced that Fleet Street has yet to wake up to the fact that people no longer consider themselves mere “readers”, and now reckon that they are all “writers”. They are less interested in reading other opinions online as making themselves seen and heard. And it also offers direct contact with the many players and pundits who use it, such as Rio Ferdinand, Joey Barton, Stan Collymore, even Rooney himself.

This is why I encourage them to take part in the books what I write (copyright Ernie Wise, circa 1974). My latest, a history of Tottenham managers, has a second-half devoted to the teams and views of Spurs supporters (who can learn more at http://normangillerbooks.com)

I wonder how many will take part? Or will they consider me faceless and feckless?