Silver surfer NORMAN GILLER reveals he was an early adopter of new technology, and he uses his long-learned skills to get the inside detail on News International’s plans to make their online journalism pay

Murdoch’s gallery of online newspapers, The Times, Sunday Times, News of the World and The Sun. I have been privy to confidential in-house memos, and the plan is for a division of Sky Sports to be set up to provide exclusive and breaking sports news videos to the webmasters for instant broadcast on the paid-for newspaper sites.

When Murdoch first announced that he was going to charge for online content I thought he had finally flipped. My feeling was that people would not â€” to coin a phrase â€” pay money for old Roop. Note: I also remember thinking that the move to Wapping was a whopping mistake.

I am a veteran of internet surfing and, occasionally, suffering. Anybody like me who once had a Telecom Gold email address can justifiably be called battle hardened.

I was an “early adopter” long before that phrase was being used in this context. That was back in the early 1980s, when I worked on the original Macintosh 128k, which 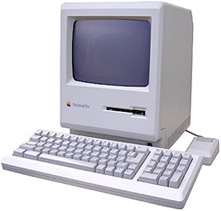 later morphed into the much-loved AppleMac Plus. This was an all-in-one beauty, with a nine inch screen, elegant design lines and a mind-blowing 512kb memory.

It was on this computer, using the design program Aldus Pagemaker, that I produced one of the earliest desktop publishing books â€” Frank Bruno’s Know What I Mean? The method was so new that when I presented it to the designer, he ran it off as if in galleys of type and then used scissors and glue to perform the old-style layout. If you can get hold of a copy you will see a slight blur on many of the pages where he was rubbing them down.

With my then cutting-edge computer, you could use only one program at a time, and I worked with a pile of floppy disks within easy reach. I would check periodically to see if I had any emails on the pioneering Telecom Gold system. As hardly anybody else had been captured by this new-fangled idea from British Telecom, I had few people with whom to communicate, and so dropped my subscription after a year. Just ahead of the demise of Telecom Gold.

I have since been very wary of taking out online subscriptions, and find I can get most information I need for free by exhaustive use of Google. I often dip into the newspaper websites, but quickly zip off elsewhere if they ask for dosh to drink in their information.

The Murdoch plan is to make his websites irresistible to news, gossip and sports junkies. As I write, there are small bands of sworn-to-secrecy internet-savvy News International journalists and webmasters preparing for the paid-for launch.

As I understand it, general news will still be free but exceptional columnists such as Jeremy Clarkson, Steven Howard and the big-name celebrity “writers” like Terry Venables, Harry Redknapp and Ian Wright will only be available in the paid-for package.

The fabled Times crossword has, of course, been available as a subscription service for several years. I had a daily sports crossword â€”Times Square â€” in the paper when the service was first launched and it became part of the online package, without the creator and compiler getting a single penny extra (aggrieved, moi?).

They are already starting the engine for the big push towards the pay-for revolution, with the introduction of the Times+ subscribers’ loyalty club where they are using culture, art and the classics as the drawing card. There are a range of bargain offers, such as hugely discounted exotic holidays, cheaper wines by the bucketful. Give-away ballet and opera tickets and audio books abound. This is the testing ground for the major changeover.

Sports will be a key seller, particularly with the Sun service. Subscribers will be offered a free direct-to-your-mobile results service, there will be videos of goals and cut-price offers from all the sports goods and clothing manufacturers. This wrapped up with Page 3 girls at their most alluring, bingo and puzzle games offering huge cash prizes plus a promotional link with Sky will, they hope, make it an offer too good to refuse.

available, for a fee, for more than a year – and the planning team is hunting innovative ideas that would appeal to potential subscribers. Young sportswriters with web skills should be hurting their heads for ideas. This is the new world for journalists. Make sure you’re aboard for the early voyages into the unknown. But be careful to guard your ideas. They are easily nicked.

A television advertising blitz is planned, and there will be special rewards for readers who stay faithful to the newspapers and take out a subscription.

Murdoch, at an age (78) when most men have put their feet up or even popped their clogs, is nobody’s fool. He has had a team of advisers working on the paid-for plan for more than two years.

Roop knows it’s a gamble, but with shrinking income from his newspapers, he realises he has to make the internet pay.

He is aware that his biggest obstacle is the magnificent, all-embracing BBC website, which explains why his son James, News Corporation’s European chairman, went for the Beeb’s jugular at the recent Edinburgh Television Festival.

Murdoch Junior argued: “The expansion of state-sponsored journalism is a threat to the plurality and independence of news provision â€¦ The BBC is dominant. Other organisations might rise and fall but the BBC’s income is guaranteed and growing.”

The Murdoch point is well made, but from the wrong mouth. BBC’s growing monopoly should be a subject for Parliamentary debate, not aimed from the gun of the man who runs the rival BSkyB organisation. It will be interesting to see where David Cameron stands on this if (ok… when) he gets into No10, with the enthusiastic backing of The Sun.

As I am more from Murdoch Senior’s generation, I applaud his forward-thinking. The newspaper print industry is dying on its feet, and this old git is all in favour of proving that the internet can pay.

I am launching my latest experiment with a comedy novel you can download, called What A Carry On!

It’s a novel novel in that anybody forking out Â£4.99 will appear on the cover, in the cast list and also within the book.

Like old Roop, the brainbox is still working. Pity about the rest of me.