TALES FROM THE TOY DEPARTMENT: 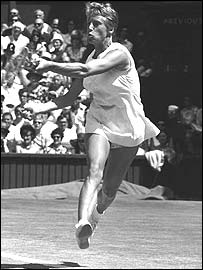 Ahead of Wimbledon 2008, as part of our retrospective series celebrating 60 years of the SJA, BARRY NEWCOMBE, our chairman, looks at the work done to provide state of the art press facilities at the world’s finest Grand Slam

In 1965, I worked at Wimbledon for the first time as tennis correspondent of the London Evening Standard. I had been writing on tennis only for a matter of weeks but the British circuit in those days was much longer lasting and varied than it is now and by the time Wimbledon began, I had already seen most of the leading contenders in other events.

I still had to learn about Wimbledon, the geography of the grounds, its values, its traditions, the careful way it makes progress year on year, the care and thought which goes into looking after the players, the planning for spectators and their needs. I also had to learn how to work at Wimbledon.

At that time there was one small writing room. For the rest of the year it served as an afternoon tea room but during the championships it housed around 20 writers and their typewriters. There was just about enough space for the British writers, the few overseas writers who attended, and the international agencies – UPI, AP, Reuters and AFP – and the two British agencies, the Press Association and Exchange Telegraph.

With a window of little more than couple of hours of playing time (it was a 2pm start on all courts in those days), the evening papers like the Standard had to work fast to provide the words for their late editions. My rival and helpmate then was John Oakley, of the Evening News who was statistically gifted and instinctively helpful. It would have been impossible then to have operated without help from other colleagues – and Oakers was out of the top drawer.

Both of us would be on Centre Court, would rush back downstairs at the changeover after the third game, grab a telephone, dial our offices, ask for sports copy, dictate 10 paragraphs to say that Ann Jones was leading 2-1 in the first set.

Two hours later, our respective editions arrived at Wimbledon with the headline news that “Jones surges ahead”. By then, of course, Jones could have been beaten, but that was the way it was in those days.

SOME WRITERS HAD THE luxury of an assistant to phone their typed stories. Everyone else phoned their own work, sometimes being forced to ad-lib because of time pressures. If you kept a clear head and had a good typist at the other end you could hammer out 20 paragraphs or more in 10 minutes. Oakers and I were as good as anyone in that department but

Geoffrey Green on The Times (and later Rex Bellamy), David Irvine on The Guardian, Laurie Pignon on the Daily Sketch and Daily Mail, could also tell a fast tale from under the hood of the phone booth. Pignon liked to smoke his pipe at the same time and was always in danger of setting fire to his notes.

All this went on for the 12 days of Wimbledon mixed in with cocktail parties (they gave us one,we responded the following week) and the Wimbledon Ball, held on the final Saturday. For a newcomer like me, it was like walking on to a sporting film set.

What changed Wimbledon and the rest of tennis beyond all expectation was the arrival of open tennis in 1968. The British, in particular, had lost patience with the shamateur state of the game and in the late summer of 1967 they staged an eight-man event on the Centre Court at Wimbledon composed of players who were banned from the regular tour. Tennis had been called a “living lie” by Herman David, chairman of Wimbledon, and the message and the accompanying mood for change was growing everywhere.

At the end of the year the Lawn Tennis Association voted for open tennis and by the following May, at Bournemouth, the world’s first open tournament became a reality.

One of the key factors of open tennis was the incorporation of great players who had been banned from the so-called amateur game for turning professional. The return of Rod Laver, Ken Rosewall, Pancho Gonzales and others produced massive interest which was reflected in higher demand for press accreditation. There was prize money available totalling Â£26,150, appalling weather and attendances down by 24,000, which was blamed on a rail go slow. But open tennis was a reality.

IN 1969 THE PRESS WRITING ROOM was extended, a new Press restaurant came a year later. In 1973, new radio and Press interview rooms were provided. The arrival of Bjorn Borg, Jimmy Connors and John McEnroe in a five-year period fuelled interest as never before. Add the presence of Chris Evert and Martina Navratilova in the same decade and it was easy to see why the Press contingent was growing – and that their needs had to be met.

Once, player interviews were minimal at Wimbledon. The winners usually held a conference but other player contact was done on the hoof around

the premises. But the developing Wimbledon had to provide new interview facilities. McEnroe, because of his on-court outbursts, was as much a news story as a sports story. There was even a a scuffle between two writers after one of his conferences.

Over the years Wimbledon continued to enlarge and reposition writing rooms to keep pace with demand and there was similar updating of radio, television and photographic facilities – a new pit for photographers was installed on the Centre Court in 1990. A new Broadcast Centre came into full use in 1997 and then in 2000 the opening of the Millennium Building incorporated a Press Centre with writing, photographic and restaurant facilities for the accredited media. Some 2,000 people now work in the Broadcast Centre. Wimbledon accredits 700 journalists and 220 photographers from some 40 countries.

Centre Court and No 1 Court Press seats are within a short walk from the Press Centre and in the case of the Centre Court there will be some repositioning in 2009 after the Centre roof alterations are complete.

All of this reflects Wimbledon’s clear desire to maintain its media facilities at a high level and it is certain that they will always endeavour to be at the forefront. Come 2012, Wimbledon may be one of the older venues for the London Olympics, yet it will offer entirely up-to-date media facilities.

IT IS EASY THESE DAYS to report on Wimbledon without leaving your seat in the Media Centre. But now and again it is rewarding to head for one of the undoubted historic focal points of the Press activity – the front row of the Press Box on Court 2, where the closest seats to the action are available. Sit there, and now and again a serve hit from the opposite end at more than 130mph will thunder into the back wall and bounce back into the Press seats, the ball still fizzing.

To read previous articles in our series TALES FROM THE TOY DEPARTMENT, including Hugh McIlvanney on George Best and John Arlott on Jim Laker, click here